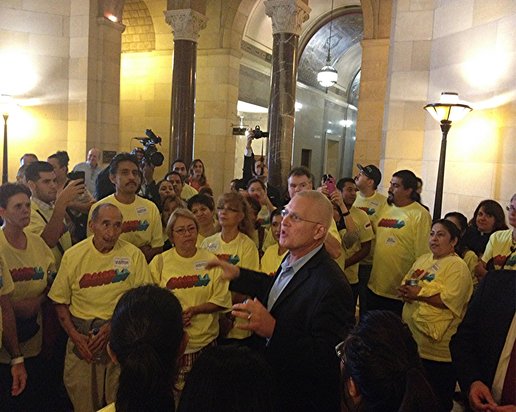 Amid cheers from labor and community supporters, 12 of the 15 Los Angeles City Council members voted Wednesday in favor of an ordinance that will raise the minimum wage for workers in large hotels to $15.37 per hour. The measure will apply to hotels with 300 rooms or more beginning in July 2015, and expand to hotels with 150 or more rooms one year later.

Prior to the meeting an eager crowd of activists and workers, dressed in yellow “Raise LA” T-shirts, gathered in the hall outside the chamber. Raise LA is the name of the movement behind the measure. After the item was introduced, councilmembers offered their views on the living wage ordinance. Councilmember Mike Bonin opened the comments with a statement about economic justice.

“A great unfairness is that people work full time for wages that do not bring them above the poverty line,” he said.

Members of the public then addressed the council, arguing for and against passage of the bill. Those speaking in favor of the ordinance included Santa Monica Mayor Pam O’Connor, Los Angeles County Federation of Labor leader Maria Elena Durazo and a number of hotel workers. Supporters stressed the ordinance’s ability to lift families out of poverty, and their own struggles working multiple jobs. Ruth Dawson of the American Civil Liberties Union tied the living wage ordinance to women’s issues, stating that “reproductive justice means being able to work and take care of your family.”

Detractors primarily belonged to the business community and included several hotel owners and managers. Critics said the ordinance could cause hotels to become less profitable. Julie Robey, the general manager of a Holiday Inn, warned of potential layoffs.

“A gradual increase will be better for the employees,” she said.

Pam O’Connor countered business owners’ fears of lost profits by noting the success of a similar law in Santa Monica. “Local businesses today are as profitable as they have ever been,” she stated.

As the results were announced the crowd erupted, chanting “Si se puede!” (“Yes, it is possible!”)

Following the vote, the triumphant crowd gathered outside the chambers to listen to ordinance authors Bonin, Nury Martinez and Curren Price, along with Durazo, celebrate the historic measure. Price said, “We’re making history,” while Bonin and Durazo both framed the vote as a step toward more comprehensive living wage measures.

Voting against the measure were Councilmembers Paul Krekorian, Mitchell Englander and Bernard Parks. Since the vote was not unanimous, the council will meet again next week to finalize the decision with a second vote.

This piece first appeared in CapitalandMain.com