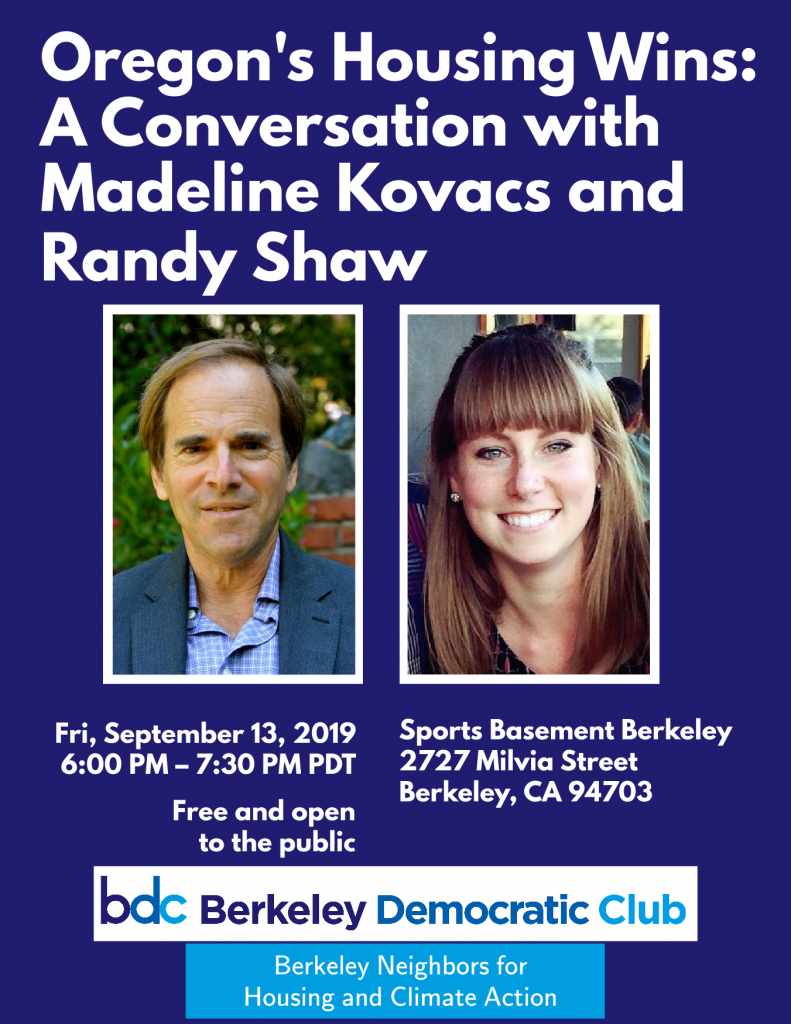 In 2019, Oregon has passed a statewide anti-rent gauging/just cause eviction law and a state measure ending single-family home zoning. How did this happen? Well, Portland-based housing activist Madeline Kovacs is coming to Berkeley this Friday at 6pm and will answer this question. Kovacs will also highlight which Oregon lessons could  apply to California and individual cities.

I will be interviewing Kovacs at the event, which should be an inspiring evening. The event is free.

I first connected to Madeline Kovacs in 2017 when I interviewed her for the Portland section of Generation Priced Out.  She grew up in Berkeley and attended Berkeley High before leaving for Macalester College in Minnesota (Macalester is a great training ground for organizers). She returned to the west coast, and spent a decade building the youth climate change movement before becoming part of a new generation of housing activists that came to the issue through a deep commitment to fighting climate change.

In 2017 and until earlier this year Kovacs was the local coordinator of Portland for Everyone, a coalition  the statewide 1000 Friends of Oregon organization focused on local land use decisions. In 2019 she joined the Seattle-based Sightline Institute, one of the nation’s leading sustainability  think tanks. Still based in Portland, Kovacs was involved in Oregon’s historic June passage of the first statewide bill to end detached single home zoning.

After that bill passed, which followed the Oregon legislature’s enacting a statewide rent cap and just cause eviction law earlier in 2019,  some of us said we had to get Kovacs down to the Bay Area to spread Oregon’s lessons.

Those attending her talk are in for a real treat.

Kovacs will talk about the strategies that brought success in Oregon and Portland that could also apply to California and Bay Area cities. She will also talk about the distinctions.

Here’s a sampling of what Kovacs will address:

Are Portland homeowners more receptive to fourplexes? Is the generational divide over housing evident in California an issue in Oregon? Is there less opposition to increasing density in Oregon? Are affordable housing advocates more supportive of zoning reform that also benefits private developers? What should Bay Area activists be doing for their cities to accomplish what Portland is moving forward to doing on land use reform?

Perhaps the biggest similarity between Portland and Berkeley is that both are seen nationally as very “progressive” cities. But both also show how residents of these cities define themselves as “progressive” despite maintaining and promoting exclusionary, elitist and anti-environmental land use policies.

Portland has had a reputation of a city of bicyclists going back to the 1970’s. Its bike sharing system remains among the nation’s best.

Yet support for bicycling is not necessarily joined with support for allowing new fourplexes in Portland’s single-family home neighborhoods. In fact, Kovacs will describe how she and fellow activists have worked for years to enact a Residential Infill Project over strong homeowner opposition.

Similarly, Portland’s Mayor Ted Wheeler is on record as supporting a Green New Deal. But he also supports one of the most environmentally destructive projects in the region, a $450 million widening of the I-5 Rose Quarter Highway (See “Boondoggle: Portland Takes a Step Backward”) Fortunately, activists recently won a delay in the project as a court required a new environmental analysis.

Nevertheless, it remains shocking that in 2019 “progressive” and “green” Portland is even considering a highway widening. It’s comparable to “progressive” and “green” Berkeley taking pride in building a seven story “green” parking garage. Or Berkeley’s City Council majority opposing state legislation to allow housing on BART stations and worshiping at the alter of single-family home zoning.

Madeline Kovacs will have a lot to talk about. And I anticipate a lot of great discussions with those coming to the event. So if you’ve been eager to find out what Portland and Oregon do that makes sense for Berkeley, Oakland, San Francisco and other Bay Area cities, come to the Friday at 6pm event at 2727 Milvia in Berkeley. I’ll bring some copies of Generation Priced Out if you have not yet picked up a book.

Randy Shaw is Editor of Beyond Chron and author of Generation Priced Out : Who Gets to Live in the New Urban America