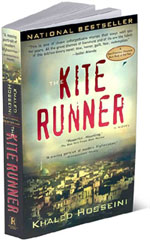 “There was more shaping to this book than we generally do.” – Asya Muchnick, editor at Little, Brown, referring in The Boston Globe in 2005 to Kaavya Viswanathan’s novel How Opal Mehta Got Kissed, Got Wild, and Got a Life

“’The truth is it needed work… The last third of the book had to be rewritten. – Cindy Spiegel, co-publisher of Riverhead Books, referring in The New York Times in 2004 to Khaled Hosseini’s novel The Kite Runner

The other scandal shoe dropped in book publishing with word that a 19-year-old Harvard hotshot’s first book, for which she got a $500,000 advance, clearly plagiarized Columbia hotshot Megan McCafferty’s novels Sloppy Firsts and Second Helpings. (You can’t make this stuff up.)

This also culminated a rough season for a certain class of supposedly sophisticated readers who routinely share self-congratulatory Bush-is-stupid Internet jokes. It was one thing for Charles Barkley, the basketball star, to complain famously years ago of having been misquoted in his own autobiography. And Oprah Winfrey’s recent Emmy-worthy performance with James Frey – during which the First Lady of book clubs assured America that she was shocked, shocked to learn that Frey fabricated material for A Million Little Pieces – discredited nothing more highfalutin than a memoir by a recovering substance abuser.

But wipe those smug smiles off your faces, ye consumers of “real” literature. Viswanathan’s astonishing artistic and commercial success turns out to be a slam-dunk conspiracy of hyper-ambitious Ivy Leaguers in league with well-bred but money-grubbing packagers and editors. Maybe you can’t judge a book by its cover. But when something is too good to be true, it probably is. Or isn’t.

Which leads me to be the first to say why this East Coast brouhaha should be of special interest to Bay Area intelligentsia: I suspect we have an undercovered questionable scenario in these parts, too. It involves Khaled Hosseini’s The Kite Runner.

If you liked Hotel Rwanda, then you’re going to love the inevitable movie of The Kite Runner. Hosseini, a doctor currently on leave from the internal medicine department at Kaiser Permanente in Mountain View, has produced, or at least caused to be produced, a book with compelling characters and moments of transcendent lyricism.

Once more with feeling: The Kite Runner is a good novel. Even a very good novel.

Still, excellence alone doesn’t explain the Hosseini phenomenon. In order to become the kind of literary property that gets hyped into mainstream success on multiple platforms, you need a little something extra. In The Kite Runner’s genre, the most easily identified something extra is a Heart of Darkness setting and sensibility, with requisite doses of misery and hints of imperial complicity before the redemptive payoff.

Like Viswanathan, Hosseini also boasts a terrific backstory – in his case, that of a bootstrapping immigrant from a region of contemporary fascination who rose to an American day job in the grand tradition of William Carlos Williams.

However, the standard literary diagnosis of The Kite Runner does not, in my opinion, go deep enough. I’ll be blunt. It is simply not believable to me that such a novel could have been written in its entirety by someone who knew no English prior to moving to the United States in 1980 at age 15.

Sure, it’s a touchy subject for those of us who want to applaud Hosseini’s achievement. But honesty and authenticity trump niceties.

Nor is this problem new in publishing. Some critics have questioned the fidelity to historical events of some passages in Nobelist Elie Wiesel’s Night, a Holocaust classic of deliberately vague genre. (Wiesel defenders ascribe the lapses to imperfect translation, to be corrected in future English editions.) More pointedly, the Village Voice’s Eliot Fremont-Smith established beyond a reasonable doubt a quarter-century ago that Polish-born Jerzy Kosinski – author of The Painted Bird, Being There, and other celebrated novels – benefited from, shall we say, an overzealous committee of editors and enablers. (Kosinski, who became a rather creepy fixture of Manhattan night life, subsequently committed suicide. I’m not for a moment suggesting that Fremont-Smith’s reporting was the proximate cause; much more likely was the very real overall emotional burden Kosinski carried as a survivor of World War II atrocities.)

As for Kaavya Viswanathan and Khaled Hosseini, there are obvious differences between them as well as one troubling similarity. Well, two actually – both erstwhile unknowns pocketed cool half-million advances right out of the box.

The former is a kid, and she was apparently manipulated by her parents and by an entire industry of high-powered, well-connected career counselors and agents. My 17-year-old son – who by the way is himself headed to Columbia in the fall – argues persuasively that Viswanathan is more a victim than a perpetrator of the resulting maelstrom, as she might have been only dimly aware that the enterprise for which she was nominated to be the “face” was based on high crimes and misdemeanors.

Hosseini’s book is no blatant concoction. Further, in raising this question I intend not so much to level a charge as to underscore the unseemly scale of credit hoarded by Hosseini’s promoters at Riverhead Books, a division of Penguin Group USA.

“As first drafted, the novel was far from perfect,” The New York Times’ Edward Wyatt crowed on their behalf in a December 15, 2004, “Culture Notebook” piece on the making of this “surprise” bestseller. Wyatt went on to serve up the Cindy Spiegel quote at the top of this essay. Hosseini, for his part, was not quoted once in the 1,500-word article but was said to have “confirmed” Spiegel’s account.

Now let’s break this down. We all need a little friendly editing from time to time. But denizens of publishing’s Beltway love to talk in code, which is why I sniff a more incriminating narrative. When all is said and done, I suspect that something like the following happened. Hosseini originally submitted 30 or so pages, which were dazzling. He then, I speculate, went on to demonstrate little prospect of transforming that fragment into a coherent 368 pages.

In short, I’m saying that The Kite Runner, for all its virtues, is as much novelization as novel.

Without access to the original and published versions and sundry interim drafts, who’s to say? The only parties who might know – the author and his editors – aren’t motivated to answer with the truth, the whole truth, and nothing but the truth; indeed, even if they wanted to, they probably couldn’t objectively assess where one’s prose ended and the others’ somewhat patronizing reworkings began. (The publicists for both Khaled Hosseini and Riverheads Books were emailed advance drafts of this article and invited to comment. Neither responded by press time.)

One thing is certain. The credibility of franchise-building, synergy-happy publishers isn’t at its apogee these days.

Before a coalition of publishing establishmentarians and local multiculturalists objects to my saying all this out loud, I ask you to read (or re-read) The Kite Runner for yourself. Personally, I enjoyed the book when I picked it up two years ago. At the same time I was unsettled by a disconnect between its powerful opening chapters and what seemed to me the perfunctory, almost obligatory, development of them into a trans-decade saga all too conveniently bridging pre- and post-Taliban Afghanistan. The depictions of Fremont’s Afghan community – the flea markets, the arranged marriages, the tortured relationship between homeland and adopted land – resonated in their details and emotions; whereas those of Kabul read like they were cut and pasted in service of an outline.

Then I read Riverhead bragging to The Times, in effect, “He sure wrote bad but we sure edited good.” Hosseini’s interesting bio was a marketing tool. His capacity to bring it all home, I concluded, was just one ingredient of a rich stew.

If this analysis is correct in large measure, then that’s because talent of a certain level is eminently disposable in corporate publishing. As in college basketball, where the constants are the exploitive coaches who preen for the cameras from the sidelines, the system of big-time American letters gravitates toward the star of the “genius” editor (as the title of a biography of Maxwell Perkins once ludicrously labeled him). And like coaches on campuses of what are advertised as institutions of higher learning, editors play musical chairs in an industry with all the bottom-line pressure of less pretentious companies. (More bottom-line pressure, in fact – the natural profit margins for manufacturing widgets exceed those for manufacturing books.)

You can’t tell the players without a scorecard, and if you doubt me just take a look at the folks associated with the Viswanathan project. Claudia Gabel went from an editorial assistant at Crown (plagiarism victim McCafferty’s publisher), to a developmental editor at Alloy Entertainment (the teen-fiction factory behind Viswanathan’s cribbed novel), to an editor for Crown’s sister imprint, Knopf Delacorte Dell Young Readers Group.

Then there’s Little, Brown’s Asya Muchnick. Though still in her 20’s at the time, Muchnick made her name as the editor of the darkly over-the-top 2002 bestseller The Lovely Bones by Alice Sebold. In the wake of the How Opal got Kissed fiasco (which led Little, Brown to pull the book), will Muchnick be held accountable? Or will she endure as the Teflon It Girl of belles lettres?

In case you’re wondering, Asya Muchnick is not, to the best of my knowledge, related to me. (Though no one is around any more who can say exactly what went down in that Ukrainian shtetl…) Also – full disclosure here – she did once reject a book proposal of mine.

Irvin Muchnick’s Wrestling Babylon: Piledriving Tales of Drugs, Sex, Death, and Scandal will be published next year by ECW Press and found under “nonfiction” in bookstores – we think.