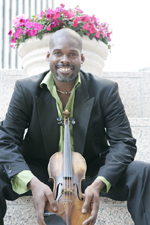 I’ve seen some incredible jazz violinists in my day, Stephane Grapelli, Jerry Goodman of the Mahavishnu Orchestra, Steve Kindler, the incredible Jean Luc Ponty, Eddie Jobson, the disgustingly talented Al Shankar and most recently Tracy Silverman. During last month’s fifth night of Kwaanza at the African Cultural Center, I caught a glimpse of one of the most extraordinary electric jazz violinists I have seen in quite some time, the self proclaimed “Improv-o-linist”, Kippy Marks. Marks delighted the crowd with his one man show of loops, samples and remarkable prestidigitations. Kippy comes to Rasselas next Tuesday night, with a full band for his latest CD release of “To the Mountain Top”. You don’t want to miss this.

Kippy Marks has been delighting audiences with his inspirational compositions and lively performances for over 2 decades. Raised in El Paso, Texas, the Artist began his musical acclaim with performances with the El Paso youth symphony orchestra and also the Coronado T-bird Orchestra which was awarded a first-place recognition by winning the international Youth & Music Festival coveted Award in Vienna, Austria during his tenure.

Kippy began to refine his artistry by performing as a distinguished member of the Denver youth Symphony Orchestra and with the Billings Symphony Orchestra before turning his attention to the art of composition and improvisation. With his unforgetable compositions, which draw from Classical, Jazz, Blues, Dance and even Middle-Eastern and Eastern-European traditions which has brought Kippy global recognition which includes the Los Angeles, San Diego, San Francisco and Bay area communities.

Upon relocating to the San Francisco/Bay area, the Artist hopes to achieve continued high visibility with the community and hopes performing for such distinguished audiences as the San Diego Chamber of Commerce, San Diego City Council, and the Insights World Conference Leadership Forums will segue into many years of inspiring-creative-experiences within and around the San Francisco/Bay Area. Kippy’s innovative stylings have been featured at the Hotel Del Coronado and Westgate Hotel, and have shared life within community festivals such as San Diego Pride and Cityfest festival.

Kippy was proud to be affilliated with such companies as Schwarzkopf International, Coffeebean and Tealeaf Coffeehouses and with groups such as the Concious Youth Media Crew, Intel, Salano Stroll and many charitable organizations in San Francisco and in the Bay area. Kippy believes in giving back to the community and has contributed his talents to charity and youth-outreach organizations such as Ordinary Miracles the Metropolitan Community Church, Market Street First Adventist Church, Unity Palo Alto, Nurses Association of America and the Boys and Girls Club of America just to name a few.

“Improv-o-linist” Kippy Marks does it again with the third vol. of the trilogy TR-2 “Tranquillium”. This project grabs the listener and brings them to the final place of Musical Peace with a fusion of jazz rhythms that intices the ear and body to truely feel the artist passion and devotion to the gift of music. “U”, the title of the cd represents the artist’s gratitude to everyone who has shared in the sprit of the creration of music. Kippy has released nine albums through Kima Exclusive Entertainment. With this recent album Kippy will undoubtedly recieve rave reviews and even greater local recognition and opportunities to share his gift for music and expression.

Kippy Marks
Rassalas Jazz Club, 1534 Fillmore
Tuesday, February 3rd
Doors open at 6:30 pm and the show begins at 7:30 pm.
There is a $20 cover which includes a copy of his CD