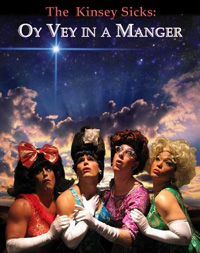 A DIFFERENT STAR SHINES OVER BETHLEHEM. In their latest effort to stamp out holiday cheer, the Kinsey Sicks take their a cappella singing to new highs and new lows. This is the second year for “Oy Vey in a Manger” at the New Conservatory and it is not for the faint hearted. The only priests you are likely to see in the audience will be spoiled priests (those that have had sex). Using well-known xmas songs as the basis for much of the material they have changed the words to make fun of all religions, Prez Bush and other political wanabees.

“Why be sad – when material goods can make you happy” – they a cappella to the baby Jesus. In another scene they give each other xmas candy in Condoms. No doubt about it – this is an R-rated show. It would never play in Texas, Oklahoma or Ohio. If they dared to do so – they would be shown the border after the bushettes burned the Kinsey Sicks’ outfits. In “Oh Come All you Faithful” – they have changed words to “Hock your Wages – join the throng.” The Kinsey Sicks tell us – “Jews don’t sing hymns – they just write them.” I don’t think you’ll see that in a Macy’s after xmas sale ad! In “Oh, Little Town of Bethlehem, it becomes “Oh, Little Town of Methahem.” Then, of course they belt out this howler..”Rent a Homo for your party. All your friends will be impressed.”

They dress in what can only be described as Early Goodwill – fluffed up with tons of Ziconia Jewelry. But here is an astounding fact about the show — The Kinsey Sicks can really sing. They blend their voices together perfectly. Even better than “The Lemon Sisters”, who sang a cappella on the Lawrence Welk show. So, if the “Sicks” want to go legit – they could put out a C.D. called “Kinsey Sicks go Straight” – and when it hits the top of the charts – they will be the darling of The Leno and Letterman shows. They might even make a C.D. with “The Three Tenors” that could be called – the Eight A Cappellas.

In their version of “Have yourself a merry little Christmas” – they sing wide-eyed – “Have yourself a merry little xmas – tell your folks you’re gay.”
This may sum up the mood of the entire show when they sing, a cappella of course – “Christ doesn’t live here anymore”. As you can see – this is not a show for everyone, especially if you live in one of the “red” states. But, if you can laugh at your beliefs – you will find this show funny enough to fall out of your chair laughing.

That’s the good news – here is the bad. They go on to long. Some of the material if way over the top and is not funny, but embarrassing. They also try to hard to be funny – and when they do, the joke falls flat. Other than that – leave your King James Bible at home and enjoy the show.

RATING: THREE GLASSES OF CHAMPAGNE. At the New Conservatory Theater.

JACK DONAHUE IS A MANNERED SINGER, who has that All American Boy look and he has an interesting voice when he isn’t twisting the lyrics into sounds that were not intended. I imagine that in his mind – he is taking standards and making them more contemporary. Donahue might want to take a tip from a song that he sings “I Wonder What Became of Me?” Somewhere under all the painful gyrations on the stage is a real singer. Most of his material sounded the same, especially the ones with season themes like “When October Goes” and “Blackberry Winter”. He was best on “Blue Skies” sung to a Latin beat and “Robert Frost” a song that has wonderful endearing lyrics that he brought to life perfectly. With “Frost” he didn’t display any of the tortured phrasing that he did in much of his set. You can hear it on his new C.D. In fact, he even told us that out of all of the songs on the record – it is the “Robert Frost” song that is getting most the radio play.

Donahue appeared with Greg Jasperse, on the piano, Emmanuel Vaughan-Lee on Bass. All accomplished musicians. This singer has a mesmerizing presence, a really pleasing voice – but I would like to see him just sing without all the facial contortions. He is best when he locks his eyes on the audience and sings without gimmicks. RATING: TWO GLASSES OF CHAMPAGNE!! At The Empire Plush Room – through Dec. 5.

NEXT AT THE EMPIRE PLUSH ROOM: Rita Moreno – of “Oz” fame. This will be Moreno’s appearance in over three years at the room. It is always a dazzling show. In January. Paula West – song stylish supreme will be on the stage in February. .and Sharon McNight will give a tribute to three great stars in “Betty, Betty and Bette,” April 5. Three winners in a row – how can you lose?