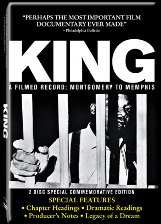 A confluence of celebrations accompanies Kino Classics’ timely DVD restoration of the National Film Registry honored documentary “King—A Filmed Record…Montgomery to Memphis” (hereafter, “King”). Most recently, the second inauguration of America’s first black president took place before this writing. Predicting this event when President Abraham Lincoln issued the Emancipation Proclamation 150 years ago would have been regarded as a madman’s delusion. Even 50 years ago, when the March on Washington was held on the Proclamation’s centenary, it’s doubtful many of that event’s participants seriously conceived of a President Barack Obama.

Rather than being a timed money grab, Kino Lorber’s newly re-mastered 2-DVD release of “King” is an act of cultural and political public service. This DVD release offers the Academy Award-nominated documentary in its complete 3-hour plus version for the first time since its original 1970 showing. New audiences can learn why King’s work still matters.

“King” captures through every defiant march and every police beatdown the real significance of the civil rights leader’s efforts. Fighting for just laws for America’s blacks was never King’s endgame. Laws may provide the schematics for how people relate to each other in a society. But it takes a political movement to build the machinery of dignity for the beneficiaries of those laws. As one placard seen in “King” eloquently and simply declared, “I Am A Man.”

The film’s opening juxtapositions of statements from black militants with the words of Dr. King display the differences in aims between the Black Panthers and the Civil Rights Movement. Since the film’s titled “King,” the Panthers unsurprisingly pale compared to the more moderate leader. While the militants express their distrust of white politicians, King quotes John Donne’s famous aphorism “No man is an island.”

The genius of “King” lies in its eschewing of any overt narrative voice in favor of simply presenting the milestones of King’s political career from the Montgomery Bus Boycott to the aftermath of his assassination. Actors of the period, of whom James Earl Jones and Paul Newman will probably be the most easily recognized, recite poetic excerpts which memorably capture truths about King’s life and his place in human history.

By not distancing the viewer with narration, “King” allows a viewer a direct immersion in the joys and stresses of the Civil Rights campaigns. Seeing the bus boycotters walk around Montgomery for literally months on end makes one worry when city officials will give in. On the ground footage of attendees to the March on Washington re-awakens appreciation of the historic importance of the event even before King delivers his famous “I Have a Dream” speech. Seeing Sheriff Jim Clark swiftly club down a reverend who steadfastly wants to register to vote de-programs five years’ worth of “The policeman is your friend” propaganda in one brutal moment.

It is in King’s oratory that a viewer can understand how this man helped inspire people to dream and work for a sociopolitical order superior to a racist and economically unjust America. When one hears the speech sporting King’s famous line about “the arc of the moral universe,” it’s an acknowledgment of the anger of those gassed or clubbed by the police on previous marches. But it’s also a reassurance that victory will ultimately come to these marchers.

King’s Selma march speech is just one of the famous addresses heard at length in “King.” Also present are “Letter from a Birmingham Jail” and “I Have a Dream.” The documentary even presents the speech given shortly after Rosa Parks’ arrest, albeit in the form of several minutes’ worth of scrolling titles.

Modern audiences weaned on leaving during a film’s end credits or believing wisdom can be gleaned solely from either a brief sound bite or messages of 140 characters or less may fear watching the oratory sequences will prove a daunting experience. Yet such is not the case. The rolling waves of verbal majesty that are King’s speeches prove in many ways to be dramatic highlights of the documentary. Harry Belafonte’s segment in “King” rightly described the late civil rights leader as someone whose uniqueness lay in showing others the bounds of the possible.

King’s greatness lay in more than just stoking black desire for freedom from the segregated social order. He continually persuaded listeners of the moral necessity of initiating a sea change in American race relations. The United States could not have both equality for all and a socially circumscribed future for anyone who wasn’t white.

To those who prospered in various ways under this inequitable arrangement, they correctly saw King’s ideas as subversive. The right-wing linkage of the Civil Rights Movement with Communism was based less in reality than in expressing their level of hatred towards King’s cause.

Nothing captures the period’s racist hatred better than the film’s footage of both small and large acts of overt racist acts. Seeing Sheriff Jim Clark’s clubbing of civil rights activists explains what his “Never” lapel button refers to. The “Nig, You Have Everything. What Else Do You Want?” banner appalls with its implication that demanding more than the limitations of second-class citizenship somehow marks one as greedy. Images of firebombed activists’ homes climaxes with the church bombing which kills four little girls.

Watching footage of King’s last birthday celebration is emotionally shattering for a different reason. King’s friends and co-workers love and respect him even when they give the man a cup to beg for money to fight the War on Poverty. The party participants’ unawareness of King’s impending assassination quietly shakes the viewer.

“King” presents to new audiences a stirring cinematic tribute to America’s sociopolitical Prometheus. It shows how this man inspired American society to truly begin moving away from stigmatizing our differences and to turn our social diversity into an asset. The prevalence of Islamophobia and homophobia in American society indicates that social journey is still ongoing.

(“King—A Filmed Record…Montgomery to Memphis” is now commercially available on DVD from Kino Lorber at www.kinolorber.com .)