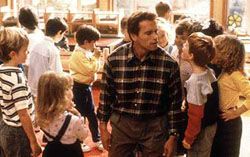 Please find enclosed, “Kindergarten Cop vs. Kindergarten Teachers,” a short op-ed piece regarding the so-called “teacher tenure” initiative. My work has previously appeared in the San Francisco Examiner, San Francisco Bay Guardian, and “Z” magazine, among others. Thanks for your consideration.

Jane K-12: Have you heard the news?
Jill K-12: What news?
Jane: We have teacher tenure!
Jill: Great! What’s that?
Jane: Teacher tenure is something that only university professors have.
Jill: But we only teach kindergarten.
Governator: You have tenure! You have tenure!
Jill: Who was that?
Jane: The Kindergarten Cop.
Jill: Who?
Jane: The Kindergarten Cop. His job is to police us kindergarten teachers.
Jill: Really?
Jane: He’s telling everyone that kindergarten teachers have teacher tenure.
Jill: I’m a kindergarten teacher and nobody ever told me that.
Jane: He says we have to be stopped.
Jill: Today I had to clean up vomit. Can I stop doing that?
Jane: No. Me, too. Little Timmy swallowed his milk money.
Jill: Did you find it?
Jane: I’m not going to fish through vomit for fifty cents.
Jill: I would.
Jane: Anyway, the Kindergarten Cop is holding a $20 million special election just to stop us.
Jill: To stop us from getting tenure?
Governator: You have tenure! You have tenure!
Jill: That guy is annoying.
Jane: Last week, he spent $3.5 million of his own money to stop us.
Jill: $3.5 million? Kindergarten cops make a lot more than kindergarten teachers.
Jane: My friend Paul is a professor with tenure at the University.
Jill: Let’s go see him.
Jane: We can’t. He’s taking a year’s sabbatical in Berlin, Australia, Hong Kong and China.
Jill: Wow.
Jane: But he only gets half his pay while he’s gone.
Jill: Half of my pay would get me about as far as Reno.
Jane: Plus, he only has to teach 12 hours a week when he’s here.
Jill: Really? Do we get that if Prop. 74 passes?
Jane: All we’re getting is the shaft.
Governator: I’m going to terminate you two. Hasta la vista, baby.