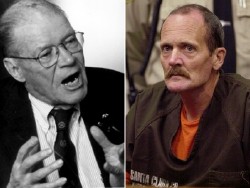 Right below this obit is a three-column headline: “Robert McNamara — led escalation of Vietnam War.” Do I really have to point out the irony here? The unemotional eulogy to McNamara, who “directed the escalation” of the war that killed three million Vietnamese — including countless children — never once uses the word “killer.” But a killer is exactly what McNamara was.

Instead of the vitriol in the Anderson obit, the McNamara piece contains only the mildest of criticism. Unlike Anderson, who bragged about his crimes, the “reticent … Mr. McNamara long resisted offers to give a detailed accounting” of his war-mongering. Despite the little matter of mass murder, “Mr. McNamara’s eventual mea culpa,” thirty years after the fact, “won him admiration from some former opponents of the war.” Of course, some still “ridiculed him as an out-of-touch technocrat.” Technocrat? Out of touch? I guess he was just too busy to notice those bodies piling up in plain sight.

Some critics, according to his obit, actually went so far as to make fun of McNamara’s middle name, which happened to be “Strange.” The nerve of some people.

Of course, remember that Anderson was a “killer.” McNamara merely “applied cost-accounting techniques and computerized systems analysis to defense spending.”

Oh, and that’s “Mr. McNamara” please. I count well over twenty “misters” in McNamara’s obit. Not one “Mr. Anderson” in his. Anderson was a “monster.” McNamara was a “mister.”

After running the Pentagon during the height of that institution’s genocidal machinations in Southeast Asia, McNamara took a turn at heading the World Bank. He “threw himself into the intricacies of international development” and helped bring financial devastation to the Third World for twelve more years. Child killer monsters like Anderson get the hoosegow. Genocidal madmen like McNamara become bank presidents.

McNamara’s obit mentions in passing the 2003 documentary, “The Fog of War: Eleven Lessons from the Life of Robert S. McNamara.” Not mentioned is his admission in this film that he was one of the architects of the fire-bombing of numerous cities in Japan during World War II, attacks which killed and incinerated hundreds of thousands of civilians — men, women and children. McNamara helped devise the tactics used to create these firestorms, well in advance of the atomic bombs that were later dropped on Hiroshima and Nagasaki. In the film, McNamara confesses that “we were behaving as war criminals. What makes it moral if you win but immoral if you lose?”

Seems like Anderson’s mistake was being on the losing side. Or maybe just not killing enough children.

I think Bob Dylan should have had the final word in McNamara’s obit:

And I hope that you die
And your death’ll come soon
I will follow your casket
In the pale afternoon
And I’ll watch while you’re lowered
Down to your deathbed
And I’ll stand o’er your grave
‘Til I’m sure that you’re dead.