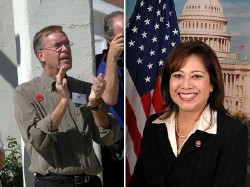 “A good organizer is a social arsonist who goes around setting people on fire.” — Fred Ross Sr.

Since the New York Times editorialized on April 6 in favor of ending the 74-year exclusion of farmworkers and domestics from the National Labor Relations Act, support for the proposal has spread like wildfire. Both of California’s announced Democratic candidates for governor, Attorney General Jerry Brown and San Francisco Mayor Gavin Newsom, promptly backed the measure. Brown, who signed the state’s Agricultural Labor Relations Act while Governor in 1975, also sent a message to all of the delegates at the April 24-26 California Democratic Convention – where Labor Secretary Hilda Solis is scheduled to speak – encouraging their support. Among the many labor, community, and academic leaders backing the proposal are John Wilhelm, International President of the Hospitality Division of UNITE-HERE, Bishop Thomas J. Gumbleton, Archdiocese of Detroit, and the Reverend Alexia Salvatierra, Executive Director of Clergy and Laity United for Economic Justice. That over 500 prominent activists and politicians from over 30 states quickly signed on to the proposal is striking, and shows both the acumen of the campaign’s organizers and the power of their message.

When former UFW General Counsel Jerry Cohen wrote a March 13 letter to Labor Secretary Solis urging her to rescind the race-based exclusion of farmworkers and domestics from the NLRA, he never anticipated such a quick and powerful reaction. Politicians, labor officials and religious leaders who can take weeks to reach and even longer to decide to publicly back a national campaign are actually eager to have their names identified with the cause of labor justice.

The New York Times editorial certainly fueled such support, but also critical has been the skills of the campaign’s chief organizers, LeRoy Chatfield, Eileen Purcell and Fred Ross, Jr.

All three are old hands at the organizing game who learned their skills through the UFW.

Chatfield led the UFW’s 1972 California campaign to defeat an anti-UFW ballot measure, a massive grassroots effort that became a model for electoral outreach to low-income and Latino communities. In recent years he undertook the monumental task of creating a history of UFW volunteers through the Farmworker Movement Documentation Project, which houses the list of labor justice endorsers and the key information about the campaign.

Eileen Purcell was a UFW volunteer who went on to found the National Sanctuary Movement in the 1980’s. Purcell is taking charge of building religious support for the labor justice campaign.

Fred Ross Jr. spent the past ten years working for SEIU, but has now left and returned to his roots seeking justice for farmworkers. Ross’s father trained Cesar Chavez as an organizer, and 2010 marks the centennial of his birth; the new campaign is a great reminder of Fred Ross Sr.’s legacy.

Cohen sought to generate a groundswell of interest that would eventually result in the drafting and introduction of congressional legislation. But the fact that support for his proposal skyrocketed virtually overnight can expedite but not radically change the legislative timeline.

This means that a bill to give farmworkers and domestics the federal labor protections afforded other workers will not likely be introduced until 2010. But 2010 is sooner than we think. The idea is that outreach efforts continue so that when the measure is introduced, it includes a huge number of congressional supporters as well as broad, nationwide constituency support.

Fred Ross Sr. had a list of “Axioms for Organizers” that SEIU produced in a 86-page, pocket-size edition. A classic Ross axiom that applies to this campaign is “No Short Cuts.” Ross believed that “Short-cuts usually end in detours which lead to dead ends.”

Far too many groups get excited about a proposal and, enticed by the media, introduce legislation before the political forces for success are in place. This is not going to happen in a campaign led by Chatfield, Purcell and Ross, Jr, all of whom share the organizing precepts of the elder Ross.

The California Democratic Convention on April 24-26 in Sacramento offers an early opportunity for labor justice advocates to broaden their support. Chatfield will be doing the invocation for the event, and Labor Secretary Hilda Solis – whose agency administers the NLRA – is giving a major speech.

Former San Francisco Mayors Willie Brown and Art Agnos also endorsed without hesitation, and Los Angeles Mayor Antonio Villaraigosa is unlikely to enter the Convention without having already joined gubernatorial rivals Newsom and Jerry Brown as a sponsor (Note: He endorsed the proposal a few hours after this article was posted).

Forty years after Cesar Chavez and the UFW used the “Si Se Puede” spirit to win Robert Kennedy California’s 1968 presidential primary, expect the UFW (and Obama campaign’s) rallying cry to be heard through the convention hall as California Democrats chart the state’s future. As momentum for this historic campaign for racial and labor grows, you can join the list of endorsers by going to the upper right hand corner of http://farmworkermovement.org/