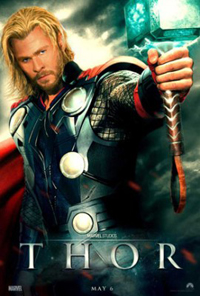 Well, it’s time to head back to the theater gentle readers. For the comic book fans, there are a ton of superhero films due out this summer, Marvel rolls out “Captain America”, “X-Men: First Class” and DC brings the classic 1960’s Hal Jordan in “Green Lantern”. Readers of my previous columns know that I have a love-hate relationship with these hi-or-miss films. “Spiderman”, “Iron Man” and the previous “X-Men” films have stayed with the spirit of the original comics and characters. We won’t dwell on the ones not in their league, we know who they are. Today, we turn our attention to one of Marvel’s best known and loved heroes, the mighty Thor. It didn’t hurt having Kenneth Branagh directing Anthony Hopkins as “Odin”, Natalie Portman as “Jane Foster” and the newcomer Chris Hemsworth in the title role as “Thor/Dr. Donald Blake”.

Branagh successfully weaved the classic comic book struggle between Odin (Thor’s father), Thor and his half brother Loki, into a Shakesperean-like tale, as well as combining Thor’s love for a mortal woman with contemporary themes. For me and perhaps many others, more familiar with the original tales, one of the biggest challenges is how to make these tales from the 60s and 70s work today. Given what he had to work with, Branagh does a fine job.

In the original story from 1962’s “Journey Into Mystery”, Dr. Donald Blake stumbles across the enchanted staff/uru hammer, in a cave. Like the film, Odin decides his son needs to be taught humility and consequently places Thor (without memories of Asgard), into the body and memories of an existing, partially disabled human medical student, Donald Blake.This differs from the film, as Thor appears on Earth, stripped of his powers.

After becoming a doctor and on holiday in Norway, Blake witnesses the arrival of an alien scouting party.and flees into a cave. The aliens ultimately pursue him and miraculously, Blake discovers Thor’s disguised hammer Mjolnir, and striking it against a rock, transforms into the thunder god, the mighty Thor.

Defeating the aliens, Thor, (like Superman/Clark Kent), shares a double life with his alter ego; treating the ill in a private practice with nurse – and eventual love – Jane Foster and defending humanity from evil. Thor’s presence on Earth almost immediately attracts the attention of his half-brother and arch-foe Loki who returns repeatedly to Earth in a bid to destroy Thor.

Tom Hiddleston made for a good Loki, cunning and nearly sympathetic half-brother of Thor. Branagh must have loved recreating the dynamics within the Asgardian royal family; Loki’s quest for a father’s love; jealousy of Thor, you name it, the Norwegians had it. Rene Russo played Thor’s mother, “Frigga”. You rarely saw her in the comics; most of the attention was on Odin, whom Anthony Hopkins played brilliantly.

Unlike the comic book version, Natalie Portman’s Jane Foster is not a nurse in the film, but a scientist. Here is a rare example of where updating a character makes sense in a more contemporary setting. Like the comics, Branagh has also included Thor’s allies, Jamie Alexander as the “Lady Sif” and the “Warriors Three”. Joshua Dallas as “Fandral”, Tadnobu Asano as “Hogun” and Ray Stevenson, (“Rome”. “Punisher War Zone”, “Book of Eli”) as the brave and comedic “Volstagg”. Thor’s best friend, “Balder the Brave” was not in film. Perhaps Branagh knew Balder was slated for an early entrance to Valhalla, according to legend and Norse mythology.

Hemsworth was actually pretty good as Thor. He played Thor with all the bravado, hubris and eventual humility one comes to expect from our Norse hero. I hope to see him in battle helmet a little more often in the subsequent Avengers film. I also enjoyed seeing Idris Elba, as Heimdall, guardian of Asgard’s “Rainbow Bridge”. Branagh sought out Elba for the role and took some flack for casting a black in the role of a Norse Warrior. Elba called the debate “ridiculous”. Personally, I couldn’t help thinking about Jimi Hendrix’s album, “Rainbow Bridge”…

By now, I’m guessing we’ve all become accustomed to the amazing 3D and CGI special effects and monster, theater-shaking audio. The battles, explosions and cinematic carnage of the digital Asgard was no exception. The plot? Well, a dash of Marvel’s original tale, spiced with Branagh’s love of royal theater, and keeping in mind this is all part of the big “Avengers 2012” roll out next year, you have a film that tries to stand on it’s own. Difficult task and Branagh makes the best of it.

Thor passes my litmus test of comic book film adaptations. The jury is still out on the upcoming “X-Men: First Class” and “Captain America” movies. While both take place during the era in which the comics were first written,( the 60’s and 40’s, a novel approach not tried before in any of the previous Marvel films), one radically changes the original plot, while the other accurately reflects the spirit of the original. 50% chance I’m going to hate one of them. But I digress…