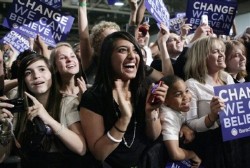 While the media speculates about Barack Obama’s potential appointees, or his future economic plans, a critical post-election question looms: how do we transition the many young activists who helped elect Obama – those eager for fulltime work implementing the new President’s agenda – into paid organizers working for progressive change? Obama volunteers who developed strong organizing skills are a critical resource that must be nourished, rather than ignored, post- election. I wrote an article for the December issue of Tikkun Magazine on how this can be accomplished; it is now available online here.