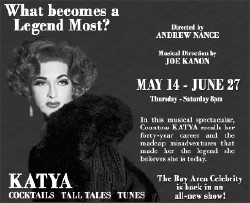 “Whether your spending time at your home along the Seine, or in the City – it is always an occasion to wear glamorous clothes Darling.” – Sez Katya Smirnoff-Skyy in ‘What Becomes a Legend Most’? Her madcap vocalizations and her diamonds made her the legend she BELIEVES she is today.

This show is all singing, cocktails flowing, tall tales and fantastic outfits. There are no button-down collars or substantial lace-ups here. Katya strives for form and a rejuvenated and up-to-date silhouette. The material is silk with the freshness of cotton – making it ideal for cruising while sitting at a Bar looking for a man who has money. “I’m doing it the old-fashioned way” – Katya Sez, while holding a glass of vodka — “All I want is to meet a nice rich banker.”

Yes, Katya talks a lot – but keeps us doubled over with laughter. She breaks out in song with something totally unexpected like the Village People song “YMCA.” And she is very picky about men. She dated Liberace for a time – but the relationship went nowhere. “I could never love a man who was more sparkly than me” – she tells us in her heavy Russian Accent. Hey, after-all, she is a Countess!

Like most Royalty, Kayta is used to wearing clothes that make her feel as if she is not wearing anything. It must be constructed with comfort and class. Good tailoring gives her freedom to move around the stage and dance while maintaining a stunning look. You’ll find no canvas sneakers on her. And robe belts are definitely out.

Is she Political? Countess Katya reveals: “I have never been a political countess!” Well, I guess that takes away the rumor that she was going to challenge Nancy Pelosi in the next election. Although, Katya IS the most fashionable.

After her husband died (The Count), she laments that she was left destitute. “I was left with only 66 Steamer Trunks, my Bentley, the House on the Seine and my Diamonds” she purrs. Then she breaks out in the gut-wrenching song from Sunset Boulevard “I’ll Never Say Goodbye.” As she leaves France – she watches the people waving their French Flags and Eating Cake. “The French have issues” – Katya says.

She talks a lot about Puccini. “He was sprawled out on top of me. Oh, I’m sorry, daaaarrrling. Puccini was my dog.” She said, while gazing at her diamonds on every finger. Katya strolls over to the bar that is well stocked with Vodka – “How wonderful for YOU to be here tonight.”

I was impressed with how smooth Katya’s monologues were. She never stumbled over her lines and her timing was perfect. Particularly terrific was her speech when she bemoans the canceling of so many gay weddings due to Prop. 8, by saying: “I needed the gigs, and all the booze and left over flowers I’ve missed!”

Right from the beginning, Katya gets the hoop-la rolling with “I Want To Be A Prima Donna!” from the Victor Herbert operetta, “The Enchantress.” And she did a wonderful rendition of “Everything is Coming Up Roses” from Gypsy” with special material written by Katya. And her toast to equal rights in the second act was “Make them Hear You” from the musical Ragtime. There is much, much more in this riotous evening. As Katya describes herself – “I’m the Diamond encrusted Audrey Hepburn of the East, Daaarrrlings!” At the end of the show – they were shouting “Viva for the Diva!”

AT THE NEW CONSERVATORY THEATRE

Terrence Beswick an up and coming playwright, has unveiled his new play called “Strings” – “It’s a bromantic dramedy”, sez Beswick. I would add to that, that the play is really wacko. And not in a good way.

Strings is described as a drama about a memory of a nightmare and a comedy about a nightmare of a memory. Now if that’s not enough to send you to the nut house, then nothing will. Personally, I was ready for electric shock treatments. The nightmare thing is true – but I don’t know about the comedy. I really was not amused. The story is asking a lot of the audience. Is it a story? A memory play? Or – just babble?

Overheard at intermission: “Are you enjoying it so far?” A man answers: “I’m a little bewildered. Lets see, what is the word ‘Painful’. Yes, that’s a good word to describe it.” And like Simon Cowell on American Idol – I couldn’t agree more. The problem is, there are too many metaphors in the play. Too many plot angles. At one point it’s a revisionism play. And wait a few minutes and it’s experimental Theater from the 70’s.

The Director, John Caldon describes it as being “poetic, hilarious, and haunting.” I will go along with the haunting part. It’s still haunting me. It’s like I was running in the woods trying to get away from a bad dream. Beswick and Caldon teamed up on their first big success “Hotshot”! It received rave reviews. But, I’m afraid that this time out in the Playwrights ring – The Bulls – (critics) are going to be the winners. Their gonna gore him for writing this neurotic story about two brothers that should be locked up. I didn’t find it erotic. And how it is going to fit into the “The 12th Annual National queer Arts Festival” puzzles me.

The Actors Juan Carlos De La Rosa and Michael Rodriquez trump the material. They are spectacular, and they work their tails off during the overly long ranting. On the plus side is the interesting set. Great lighting and directing show great creativity. But you may ask yourself – is this civilized? Is it enlightening? What is all this angst about? And, why am I F*%&ing here? To bring this all to an end – let me just say that the entire evening amounted to gross carnage. It was too symbolic to stick to my ribs. If I had a cattle prod – I would have used it on the actors to shut them up and put them out of their misery. Or, the audience’s misery.

“SPRINGTIME FOR NERO AND BERK-E-LEY–
Addison Street is Happy and Gay
Go on Romanites, go into your dance
Don’t be stupid, be a smarty, come and join the Nero party”.
(satire words added by Lee Hartgrave. Sing to Springtime for Hitler)

THIS AMY FREED TAKE-OFF ON THE FAMOUS EMPEROR NERO IS A MIXED BAG OF FIDDLES. Even though it has all the elements – narcissim, cruelty, eunuchs and matricide, this egotistical emperor may be fun to watch him cavort around the palace in his glittering crown.

I found the first act to be really great fun, the second act not so much fun. Problem is that it is much too long. It begins to repeat itself. Even though Nero is outrageous. He has a young handsome man de-balled and made into a eunuch and dress like a women. Then he has the balls preserved in Brass and has his servants carry them around to show everyone. Now, how many opportunities are you going to see something like that on the stage? I think that segment and the burning of Rome are probably the segments that will stick in your mind.

Of course, it is also intriguing that Nero has sex with his own mother. How else can he hang on to the crown that he dearly loves? There of course is deceit, seduction and outright subversive. But then aren’t all rulers that way?

Keep in the mind that this is a comedy – and it is often hilarious. The acting is an entertaining blowout. The set is Extraordinary and visually awesome (Erick Flatmo). Berkeley Rep., always has stunning production values – and this time is no exception.

O.K. so why do I have misgivings about the play? Aside from it being too long — it is not evenly funny. It’s kinda like “The Producers” light. I wish that I could pinpoint why the play doesn’t work totally for me – but I can’t. Others around me also felt the same way. Something just doesn’t click. And I won’t even try to explain the rock star ending. It looked like it was right out of “American Idol”. Rome will never be the same – and Nero is probably rolling over in his grave.

AT THE BERKELEY REP

Schuur is an acclaimed jazz singer that always astounds everyone with her clear sounds. She is excellent. Without a doubt Schuur is a must see for serious jazz enthusiasts, and non-jazz fans as well. Her performance will just blow your mind. Her background, in case you are curious, includes many recordings with the Brilliant big band Count Basie. Schurr still captures that quality of brilliance at the Rrazz Room. Where is it? At the Hotel Nikko at the Corner of Mason and O’Farrell. By the way, it’s the perfect place to relax with good music. What an atmosphere. Terrific!

This fierce melodrama with its magnificent music will bring to life a world of cruelty and deception. There is an amoral police chief who uses his power to get what he wants and a painter that Tosca loves. Pieczonka in this role has been described as “radiant”. It runs at the Opera House from June 2 – 26. AND HERE IS SOME GREAT NEWS. The Opera and the Giants will present a free live simulcast of Puccini’s Tosca at 8pm on Friday, June 5 at AT&T Park. It will be transmitted in high definition (HD) to AT&T Park’s 103-ft. wide scoreboard. For more info about this free and fantastic event go to: sfopera.com/simulcast.

MORE AT THE OPERA HOUSE. Donald Runnicles to conduct Verdi’s Requiem in a special Gala Concert on May 29, 2009 at the Opera House.