Katy Tang: A Fighter for Housing 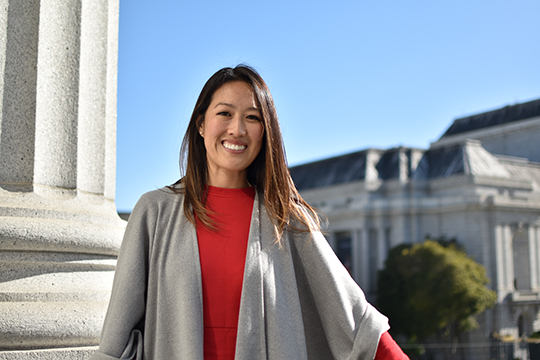 Supervisor Katy Tang is a one woman wrecking crew.

Beyond Chron sat down with the supervisor for a quick chat about the city’s freshly passed affordable housing bonus program, also known as HOME-SF.

It’s been almost two months since a two-year legislative battle ended with a victory for housing on May 23. This was a year after the same legislation was stymied before reaching the full board of supervisors for a vote.

Some said her backing the measure was political suicide — a move her predecessors never attempted for a reason.

“Talking about housing and development on the west-side of town has always been a challenge,” she said. “Everybody kind of feels uncomfortable about more people in the neighborhood, more parking, more traffic…views being blocked.”

In a nutshell, the legislation grants developers two additional building stories for market-rate projects given 30-percent of the total units are set aside for affordable housing at different income brackets. It primarily applies to projects in transit-rich areas of the city. The city expects  HOME SF to generate 16,000 units over the next two decades, 5000 affordable.

Tang also pushed for 40-percent of that affordable housing to be 2 or more bedrooms, as to allow families to utilize these units by blocking the natural incentive for developers to construct smaller units which are cheaper to build and more profitable.

According to Tang, who herself lives in a rent-controlled unit in the Sunset, she instantly faced resistance and threats of a recall when she began crafting the legislation.

The West of Twin Peaks Central Council, an umbrella group consisting of 20 west-side neighborhood groups, released its letter of opposition to the legislation in January 2016 where they argued against increased density coming to the west-side.

“We do not oppose development, but we want it to fit in with the character of our residential neighborhoods, which are primarily owner-occupied, low-density, low-height, and family-friendly,” read the letter.

The letter continued: “We are concerned that the program would allow increased density in single-family residential neighborhoods that are within a certain distance of transit corridors. Even if the program is limited to the transit corridors themselves, it is highly likely that parking and traffic congestion will spill over into the adjacent residential neighborhoods.”

But Tang wasn’t having any of it.

“When I came into office I really wanted the Sunset to step up, rise to the occasion and say we want to welcome more people here,” she said.

So, she kept moving. It also helped that some of her constituents vocalized support for bringing more housing opportunities to the west-side, serving as momentum for the uphill battle to come.

“There was also a segment of people that said they wanted it, so I just continued working on it,” she said. “We made a lot of adjustments to the legislation making sure we were thinking about small businesses and not displacing any tenets or existing residential units.”

As a Sunset-native, and prior legislative aide to former District 4 Supervisor Carmen Chu, Tang was also conscious of the Sunset’s lackluster housing production. She’s also a believer in data that shows her district as producing the least affordable housing of all of San Francisco’s districts.

According to the latest Housing Balance Report, District 4 has added the least amount of affordable housing(10 units) to the city’s market out of all 11 districts between 2007-2016. District 4 also built the lowest number of market-rate units at 106. Compare that to District 6, which includes South of Market, where 15,541 market-rate units were produced in the same amount of time.

Some Sunset residents are complaining about a 56-unit development at 2800 Sloat Blvd. that is being built within existing height limits. It’s the largest development being developed in the Sunset in the last decade and people are not having it.

But she says the project was approved over 6 years ago when the economy was in shambles, before she was a supervisor. The developer was forced to wait it out until financing became available. So HOME-SF is not to blame.

Another controversial development she has been hearing about is the redevelopment of the 76 gas station at the corner of 42nd and Lawton streets. The SF Examiner reports the developer is considering using the HOME-SF density bonus.

“I heard the community meeting didn’t go so well and the comments were ‘we don’t want more people in our neighborhood’ and ‘the developer has an accent, he’s not from here’…kind of racist comments that are not OK with me,” she explained.

Either way, housing is coming.

A closer look at the Planning Departments’ 2016 analysis of potential sites shows possible areas the density bonus may be coming. It shows housing gradually creeping west and south – towards the underdeveloped suburban enclaves of the city.

The analysis also shows good chunk of housing possible in Tang’s District 4, especially along Taraval, Noriega, Irving and Judah streets, the commercial corridors of the Sunset. She hopes this will increase foot traffic and benefit small businesses.

And Supervisor Tang has a message for those who oppose the transformation and the welcoming of more people to her District.

“We need to step up and contribute to the city’s housing challenges,” she said. “We cannot continue to just be NIMBYs.”

Garrett Bergthold is a staff writer for Beyond Chron