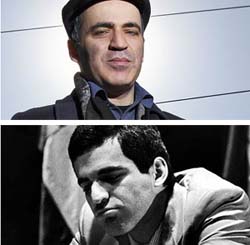 I first met Garry Kasparov, the former World Chess Champion back in 1995, high atop New York’s World Trade Center during his match against Viswanathan Anand of India. Kasparov burst onto the chess world like a meteor in 1984; chopping down fellow Grandmasters in no less than twenty-five moves; battling Anatoly Karpov in a decade long duel for the crown; splitting with FIDE, the world chess body to form his own ill-fated chess federation with Britain’s Nigel Short; his victories and subsequent defeat at the hands of IBM’s Deep Blue computers, and finally, his defeat at the hands of Vladamir Krammnik in 2000. Kasparov has been in the U.S. recently, appearing on Hardball, and promoting his new book, “How Life Imitates Art”. My former D.C. Chess League team mate and Washington Times columnist David Sands, recently wrote about the enigmatic Kasparov and his latest opponent… Russia’s Vladimir Putin.

Sands writes regularly for the Times business section, however for nearly a decade, he has penned the Times chess column. In an October 11th column titled “Kasparov fears Putin will seize last of liberties”, Sands wrote, “Former world chess champion Garry Kasparov, now a long-shot candidate for president of Russia, said yesterday that President Vladimir Putin’s bid to hold on to power after he leaves office in March is just the latest sign of the collapse of democracy and civil liberties in Russia today. Mr. Kasparov emerged as the unlikely face of Russian opposition to the Kremlin. He heads a small but vocal coalition known as Other Russia, which condemns what it recognizes as Russia’s slide into authoritarian rule since Mr. Putin took office eight years ago.

“We are not fighting to win elections. We’re fighting to have elections,” Mr. Kasparov told a Capitol Hill briefing yesterday. In Moscow, Russian electoral officials barred a vocal opposition alliance from participating in December parliamentary elections, a spokeswoman for the group said yesterday. As expected, the Central Election Commission declined to register a candidate list submitted by Other Russia, spokeswoman Lyudmila Mamina said. In a letter to the group, election commission chief Vladimir Churov said Other Russia is barred because it was not registered as a political party, Ms. Mamina said. Only registered parties can take part in the Dec. 2 vote.

Mr. Putin, who must step down as president when his second term ends in March, stunned Russian and international analysts by appointing Viktor Zubkov, an aging, little-known financial regulator, as prime minister last month and then agreeing to lead the pro-Kremlin United Russia party in December’s parliamentary elections. Mr. Putin, a former KGB agent, then announced that he would be open to serving as prime minister, assuming that a “decent, capable, efficient, modern person should be elected president.”

One scenario increasingly popular in Moscow has Mr. Zubkov, 66, winning the presidency as Mr. Putin’s handpicked successor in March, then stepping aside to give Mr. Putin the third term technically forbidden under Russia’s constitution. The Bush administration expressed concern about the drift of Russian political developments but stopped far short of punitive actions against Mr. Putin. Russia remains a critical player in several foreign policy hot spots, including Iran and North Korea.

Secretary of State Condoleezza Rice and Defense Secretary Robert M. Gates travel to Moscow today for talks on Russian concerns over a proposed U.S. missile-defense shield in Poland and the Czech Republic.Tatyana Lokshina, a Russian human rights activist, told Reuters news agency in Moscow yesterday that she and other activists are invited to a breakfast Saturday with Miss Rice. Mr. Putin has accused the United States and the West of using the human rights issue as a wedge to interfere in Russia’s domestic affairs.

Mr. Kasparov and other rights activists addressed a meeting yesterday in the Rayburn House Office Building sponsored by Radio Free Europe/Radio Liberty. The session was organized to mark the anniversary of the Oct. 7, 2006, killing of crusading Russian journalist Anna Politkovskaya, who wrote articles fiercely critical of Mr. Putin’s war in Chechnya and other Kremlin policies.

Mr. Kasparov dismissed speculation over Russia’s next leader, saying the real power would stay with Mr. Putin and a small group of Kremlin “cronies” who control the country’s vast resources through giant state-controlled corporations. “We already have a two-party system in Russia: An oil party and a gas party,” Mr. Kasparov joked. He argued that the regime’s power hold is fragile, propped up only by soaring world energy prices and subject to increasing infighting among the various factions.

Some of that infighting was on display this week in Moscow with the publication of an open letter by Viktor Cherkesov, a former intelligence officer and now head of Russia’s drug-enforcement service. Mr. Putin appointed a large number of former intelligence colleagues to top political, economic and regulatory posts. Mr. Cherkesov warned against a Kremlin civil war after his deputy and other drug agency officials were arrested last week by members of the state intelligence service, known as the FSB.”

Kasparov’s latest battle against Putin and the Russian regime is a rare sight in chess world recently marred by scandal; accusations of cheating during the last world championship match, and the imprisonment and deportation of the sad and tragic Bobby Fischer to Iceland from Japan. Let’s hope the outspoken Kasparov doesn’t suffer a similar fate, for his knack of simply calculating the truth.

E. “Doc” Smith is a former Rhode Island Amateur Champion, and has won divisional titles in the U.S. Amateur Team Championships for Brown University, as well as the Rhode Island Chess League Championships. He is also the inventor of the musical instrument, the Drummstick“, and can be reached at myspace.com/edoctorsmith