Kasparov Hit Over Head With Chessboard 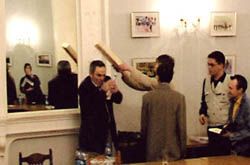 Garry Kasparov, the world’s No. 1 chess player and former World Chees Champion who quit the professional game last month to focus on politics, said he had been hit over the head with a chessboard in a politically motivated attack. Kasparov, an outspoken critic of President Vladimir Putin, was not injured Friday when he was hit with the chessboard after signing it for a young man during his meeting with students held in Moscow by Committee 2008: Free Choice in Moscow.

A spokeswoman for Kasparov, Marina Litvinovich, said the assailant told the chess champion: “I admired you as a chess player, but you gave that up for politics.” She said the unidentified attacker, who did not reveal his political allegiance, tried to hit Kasparov again but was hauled away by security guards.

Kasparov’s company binds the incident with the Nashi Movement, whose members consider Kasparov among “accomplices to fascists”. Nashi put the blame to the National Bolsheviks while the members of the Prosecutor’s Office do not rule out that the scandal was organized by Kasporov’s people to attract extra attention to him. Upon completion of the meeting the young man, who introduced himself as Burmistrov, came up to Kasparov with a chessboard and asked for an autograph with the words, “Garri Kimovich, you are a great chess player and my idol.” When Kasparov signed on the chessboard, the guy took it, hit him on the head with it and shouted, “You have betrayed the wonderful sports for dirty politics.” Then he tried to hit once again but was taken out of the hall. The young men took the chess figures that were scattered on the floor as souvenirs. “I was lucky it is chess but not baseball. No doubt all this was planned”, Garri Kasparov said. “My head still aches”, he added.

The officers of the Prosecutor’s Office of the Moscow Central Administrative Okrug reported that no complaint from Kasparov was received. Some of them are sure that the guy belonged neither to National Bolsheviks nor to Nashi. “It was someone from Kasparov’s company as he could enter the building that was guarded and no one called the police after the incident”, said one of the officers, who preferred to remain anonymous.

“It was a fairly nasty incident, it was not very pleasant psychologically,” Kasparov told the NTV television channel Saturday. “Yesterday, I was just about able to muster up enough humour to joke darkly that, luckily in the Soviet Union, chess and not baseball was popular.”

Although Kasparov’s supporters continue to blame the incident on pro-Kremlin youth, a spokesman for Nashi (Ours), a recently established pro-Kremlin youth movement, Ivan Mostovich, denied allegations that his organization was linked to an assault on Garry Kasparov, Interfax reported.

“The blow to Kasparov’s head with a chess board and the bottle of mineral water that was thrown at Nashi’s founding conference [on 15 April in Moscow] are links in the same giant chain,” Mostovich said, referring to an incident that took place during the groups founding conference.

He blamed both incidents on the radical National Bolshevik Party. “The girl who threw the bottle at the founding conference turned out to have a pistol. The young man had a chess board. What else needs to happen for the government to get involved and put a stop to the rampant hooliganism sowed by the NBP?” Mostovich said.

The 41-year-old Kasparov, a brilliant and aggressive tactician regarded by many as the greatest chess player of all time, has been ranked No. 1 in the world since 1984.

He retired last month, saying he planned to focus on politics and do “everything in my power to resist Putin’s dictatorship.” He plays a leading role in the Committee 2008: Free Choice, a group formed by liberal opposition leaders.

Putin has been accused of stifling democratic freedoms by placing national television under effective state control and centralizing power by boosting Kremlin control of parliament and the country’s regions.