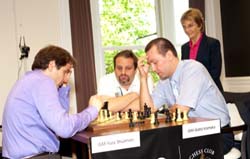 (Ed. note. Special thanks to the Saint Louis Chess Club and FIDE Chess Master Michael Klein for much of this report.) Returning to chess after nearly a 5 year lay-off to attend law school, Gata Kamsky won the 2010 US Chess title in Saint Louis. Klein reports, “Within only seconds remaining on his clock, GM Gata Kamsky simplified the endgame against GM Yury Shulman to clinch a draw and with it the title of 2010 U.S. Champion. He last won the title in his teenage years in 1991. Kamsky won with a draw because of the unique tiebreak format, which saw the players bid on a starting time for today’s rapid game. His secret bid of 25 minutes was lower than Shulman’s bid, so Kamsky got 25 minutes to his opponent’s 60, but with Black and draw odds. “I wanted Black because I’m more solid with Black,” Kamsky explained. After the game, Kamsky said he thought his bid was too low. He said if he had it to do over again, he would bid something around 30 minutes. Shulman built up a promising position and was better for most of the game according to Kamsky.”

“Referring to Shulman’s excellent shot 34. Rc5, Kamky said, “I completely blundered on c5 but I already didn’t like my position. He said he also missed Shulman’s 23. f3, instead preferring to push his pawn to b5 before playing Ne4.
Shulman critiqued several moves, including 53. Be8, which doesn’t actually do anything since after 53…Kxg5 the pawn on f7 is immune. Instead, continuing his king’s advance would have at least kept up the pressure. By this point, both players were down to just seconds and playing on increment.

“Gata had nine lives in this game,” Shulman said. After the game, the two came down to the commentary room. A relieved Kamsky approached the stage and let out a cheer. Normally reserved, he raised his arms in a “V” for victory.”

Kamsky was a prodigy who reached the final of the FIDE World Chess Championship 1996 at the age of 22, and reached a ranking of fourth in the world rankings in 1996. He played almost no FIDE-rated games between 1997 and late 2004.