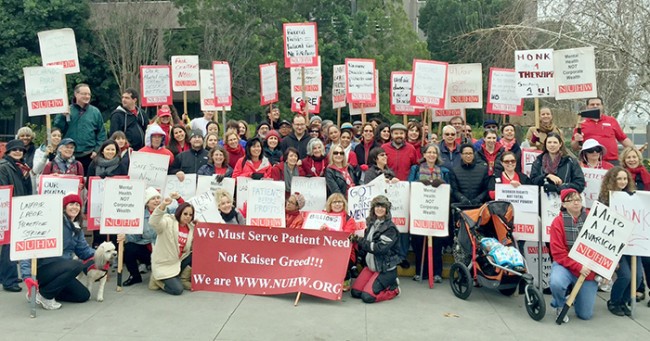 Last week’s state- wide strike by 4000 Kaiser Permanente mental health professionals should serve as a wake- up call for anyone who supports outsourcing more care of veterans to the private sector. California legislators who voted for the VA MISSION Act of 2018 should take particular note.

The VA MISSION Act paves the way for outsourcing more and more veteran care -to private sector providers.  Even though the VHA has shorter wait times, and provides access to higher quality mental care than that provided by private sector hospitals and doctors, private sector providers would thus be asked to care for more veteran patients who have more complex mental health problems than their civilian counterparts.  Yet, as the Kaiser strike once again highlights our private sector mental health system is almost totally broken.  Indeed, it’s so bad that former Director of the National Institutes of Mental Health Thomas Insel recently argued, it’s failures to provided needed care to desperately ill patients constitute, “ a civil rights issue.”

The five day strike by the National Union of Healthcare Workers (NUHW), which represents Kaiser’s psychologists, social workers, and other mental health clinicians, has exposed Kaiser’s failure to hire sufficient mental staff and give patients access to timely care.   The California Department of Managed Health Care (DMHC) found that as many as 50 percent of patients at various Kaiser facilities experienced lengthy appointment delays that violated California law. In 2013 the state of California fined the system $4 million, issued a cease-and- desist order against Kaiser, and ordered the HMO to correct the problems. A 2015, report, based on a sampling of hundreds of individual patient charts, revealed that, in Northern California alone, 22 percent of patients suffered excessive appointment delays. The DMHC called the violations “serious” and “significant.”

To increase access —on paper at least — Kaiser therapists, say they are being overloaded with new patients so wait times can appear to be improving. Problem is there is not enough staff to follow up with the therapeutic services these new patients need.

Kaiser’s failures are not isolated but reflect the broader crisis in mental healthcare in America.   Consider just a few of the facts.

According to studies by the National Institute of Mental Health, 40 percent of people with schizophrenia and 51 percent of people with bipolar disorder go untreated in any given year. A report by the Department of Health and Human Services documents that 77 percent of US counties have a severe shortage of psychiatrists, psychologists, and social workers, and 55 percent of these counties—all of them rural—do not have a single psychologist, psychiatrist, or social worker.

In urban areas many mental health providers no longer accept health insurance. In a 2013 article in JAMA Psychiatry only 55 percent of psychiatrists, compared to 89 percent of other physicians, accept private insurance; 55 percent accept Medicare, and only 43 percent will accept Medicaid patients. In California, as elsewhere, very few therapists accept any insurance whatsoever  to pay for the Cognitive Behavioral Therapy,  one of the most effective evidence based therapies for  veterans’ signature mental health problem PTSD.  If patients happen to have thousands of dollars to pay $235 or more per session, therapists will

When it comes to the care of patients who need hospitalization, things are even worse. Between 2005 and 2010, state psychiatric beds decreased by 14 percent, with per capita state psychiatric bed population plunging to 1850 levels. The VHA on the other hand has not only inpatient psychiatric units but 8000 residential beds in programs that treat PTSD, substance abuse and other mental health conditions.

Kaiser is often cited as the only healthcare system that comes close to providing the kind of integrated care routinely delivered by the Veterans Health Administration’s  The question legislators must ask is : if healthcare systems like Kaiser can’t even take adequately care for their predominantly civilian patients, what will happen if nine million veterans nationwide ( one million in California) – are added into the mix?

Suzanne Gordon is the author of Wounds of War: How the VA Delivers Health, Healing, and Hope to the Nation’s Veterans.