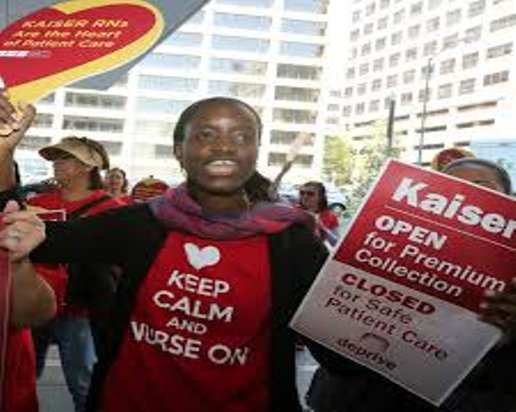 Kaiser Permanente officials are diverting multiple millions of dollars of patient premiums for registered nurse strikebreakers while failing to respond to patient care concerns raised by the 18,000 Kaiser RNs and Nurse Practitioners who work at 66 Kaiser hospitals and clinics in Northern and Central California, the California Nurses Association/National Nurses United charged today.

CNA cited a recruiting e-mail by one of the largest U.S. strikebreaking firms, U.S. Nursing, disseminated Monday which called for RNs to sign up for training as soon as September 1 with promises of free housing, travel, and $60 an hour pay, plus an additional $500 bonus, and a minimum commitment of at least four days, for a strike “anytime in the month of September.”

When factoring in the thousands of RNs Kaiser would be involved, CNA estimates Kaiser is pledging multiple millions of dollars for a strike, at a time, say RNs, when Kaiser, claiming cost concerns, is cutting patient care services and access to needed care.

“After weeks of delaying the start of negotiations, and now jump starting recruitment of strikebreakers, nurses can only conclude that Kaiser is more interested in provoking a walkout than in working with RNs to solve the deterioration of care standards that nurses and patients experience daily,” said Zenei Cortez, RN, who chairs the Kaiser RN negotiating team.

The email, sent widely to nurses around the U.S., is from Alisha Craig, vice president of business operations for the notorious U.S. Nursing outfit. It asks recruits to sign up for advance training with travel between September 1 and September 4 in preparation for a strike” later in September.

RN strikebreakers would be paid and provided free travel, housing, and presumably per diem costs, twice, first for a training, then for potentially a later strike. While Craig’s email says, “we cannot disclose our client,” recruits are required to have a current California license. The current CNA Kaiser contract expires on August 31.

The millions Kaiser is committing to RN strikebreakers is the latest example of Kaiser funneling healthcare premiums away from care delivery, says CNA. Kaiser has also donated at least $7.1 million to oppose Proposition 45, which would help rein in unlimited price hikes by corporate insurance giants like Kaiser.

“For Kaiser RNs, this is a sadly familiar tune. Kaiser’s priorities have shifted away from provision of patient care to protecting their profits. That means opposing efforts to put common sense restraints on premium hikes, and ignoring RN efforts to reverse the erosion of care for Kaiser patients,” Cortez said.

Care cuts include tight restrictions on admitting patients for hospitalization, premature discharge of patients often sent home while still in need of hospital care, systemic under staffing, closure of urgent care clinics and reduced hours for care, and closure of vital hospital services, such as the shut down of the pediatrics services in Hayward and multiple cuts in Manteca both that lead to long, and sometimes, dangerous waits for care.

“Kaiser has to date failed to adequately resolve our patient care concerns, or respect the advocacy of the RNs/NPs, the ones who actually provide hands on care for Kaiser patients and families,” said Cortez. “By now lining up replacement RNs instead, Kaiser is sending a message to its RNs that its degraded model of care is more important than meeting the concerns of its nurses or the proper care of its patients.”