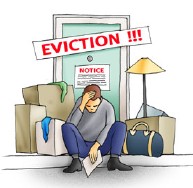 Judge Kahn does it again. Earlier this month, the Superior Court Judge nullified tenants’ rights by ruling against Susan Suval in an Ellis Act eviction – even though her landlord accepted public funds to keep renting out his property.

Now, as Suval challenges the ruling to save her home, Kahn issued a baffling decision yesterday on her “motion to stay pending appeal.” For Suval, getting a “stay pending appeal” for the Ellis eviction is essential – because reversal at the appellate court will be meaningless if she’s already lost her home by then. Kahn conditioned the stay on Suval proving (via declarations) that she has taken steps to find new housing – ignoring the possibility that a higher court could reverse his ruling, thus throwing out the eviction.

“Craigslist is insufficient,” added Kahn – implying that the wheelchair-bound tenant must actively start house hunting, while hoping that she won’t have to move. Kahn also conditioned the stay on making Suval pay rent in a court escrow account for the landlord, although the landlord’s rental income has been garnished by the state – due to a tax delinquency. “My order preempts the Franchise Tax Board,” said Kahn. With judges like Harold Kahn, no wonder San Francisco landlords file questionable evictions – they know the courts are biased against tenants.