Justice of the Peace Tells Interracial Couple to Get Lost 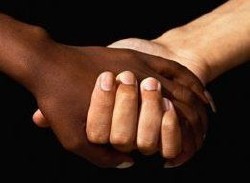 So let me get this straight. There’s a justice of the peace in Louisiana who refused to marry an interracial couple earlier this month, which is in defiance of the law, and he still hasn’t been dismissed or disciplined by the state judiciary committee?!

In fact, Keith Bardwell has become a poster child for the white supremacist set who thinks there’s biblical grounds to defend their silly belief against people of different races tying the knot. Of course, the Bible has been used to defend everything from slavery to the denial of a woman’s right to vote.

The American Civil Liberties Union and the Center for Constitutional Rights and Justice have asked the state judiciary committee to investigate Bardwell’s actions and administer “the most severe sanctions available, because such blatant bigotry poses a substantial threat of serious harm to the administration of justice.”

Louisiana Senator Mary Landrieu and Governor Bobby Jindal have joined these prestigious organizations in calling for Bardwell’s ouster from the marrying business.

A justice of the peace for 34 years, Bardwell defends his racist position by saying that the children of interracial couples suffer persecution and don’t end up making good in life. Guess he hasn’t heard of Barack Obama, Keanu Reeves or Mariah Carey, just to mention a few of the many famous racially mixed folks who’ve made out just fine, thank you.

“You don’t have regrets when you don’t think you’ve done anything wrong,” Bardwell said. “I would like to apologize to them (the couple) if I insulted them in any way, there was no intention of doing that to them.”

The couple in question, Beth Humphrey and Terence McKay, have filed a federal civil rights lawsuit against Bardwell for emotional and financial damages, even though the justice of the peace insists that he did not prevent the two from getting hitched. He says that he recommended another justice of the peace to them.

“I recused myself from doing the ceremony, a justice can legally recuse himself from performing a marriage,” Bardwell told CBS News. “I had countless number of people that were born in that situation and they claim that the blacks and the whites didn’t accept them. I didn’t want to put the children in that position.”

What about children born into homes where they are abused, physically or sexually? If he’s so concerned about children being abused, perhaps Bardwell should stop marrying people altogether, because a lot of kids are abused in their families in this country.

“I’m not a racist. I just don’t believe in mixing the races that way,” Bardwell told the Associated Press. “I have piles and piles of black friends. They come to my home, I marry them, they use my bathroom. I treat them just like everyone else.”

Except when they want to marry a white person.