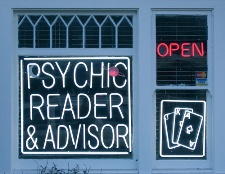 Last Sunday I decided to go see a psychic for the first time. No, I didn’t lose a bet; and no, I’m not having serious doubts about some big future decision. Really, I just wanted to see what it was like. Now Julie the Psychic actually pegged herself as Julie the “Intuitive.” I didn’t know what this meant, and when I asked her she gave me a very long and almost poetic answer about the energies of people, the universe, and our connectedness. How we’re all just small, intertwined threads of something much larger that we can’t even grasp! But that still didn’t answer my question about the word choice.

“I’m a psychic,” she finally said grudgingly. And so I felt a little bit more comfortable since I thought I knew what I was getting into. I mean, I’ve seen movies—I know about the Crystal Ball and the eyes darting around behind closed lids like the medium is dreaming.

But when Julie guided me over to the table—not behind velvet curtains, mind you, but simply her kitchen table boasting a bowl of fruit and some old mail—I was a bit disappointed. There was no crystal ball. There was no burning incense or sage. And somewhere in the house it sounded like a cat had been locked in the bathroom and he wouldn’t stop wailing.

“Okay, I’m going to just ask your spirits to gather,” Julie said. She paused for a moment, closed her eyes, and then opened them. “Okay, now you can just talk.” She leaned back in her chair and smiled encouragingly like I might be nervous. It was only then that I realized how young Julie the Intuitive was—she was probably a year or two younger than my twenty-six.

“Uh you just want me to tell you about myself?” I asked. Somehow this didn’t fit. Wasn’t this her job?

But I did anyway. I told her that I was thinking about moving—she immediately guessed (correctly) that I’d been thinking about San Francisco and Brooklyn. Okay, that was weird… I started to feel a bit more nervous.

After a while, she did begin to tell me about myself. She covered relationships, she covered work, and she even gave me some advice about writing. (I never told her I was a writer.)

At this point I found myself physically shivering, my heart was racing wildly, and I was sweating despite the fan overhead. The cat was yowling madly down the hall. And whether you believe in energy, spirits, or just vibes, man—well, there was something “other” going on at this point. So I listened.

She suggested that when I move to San Francisco I start writing for a local publication about spirituality. These spirits had informed her that I was meant to contribute to an online paper of sorts in the Bay Area and share my spiritual experiences as a new member of the community.

I don’t think she knew I’d start with her, but here I am. Just four days after meeting Julie, I sent an email to the editor at our beloved BeyondChron. I pitched the idea of introducing a “spiritual taste tester” to the site. He was apprehensive at first, but I soon won him over with my candor, my charm… and a basket of muffins (just joking).

After all, young people in San Francisco and beyond are growing more in touch with spirituality by the day. It is about time that somebody covers this important topic—from psychics to yoga and everything in between. And while I may still be a bit more comfortable in the comfort of my own meditation routine, for you, dear reader, I will explore the unknown. I will see psychics, meet healers, and try the latest nude meditation! I’ll try new yoga, go to sweat lodges, and take vows of silence!

For you, dear reader, I will walk on coals. For you, fellow explorers, I will meet with people who do drugs for enlightenment; not just a Saturday night.

Just let me know what you would like to read more about, and as Julie told me at the end of our meeting, “I will see you again soon.”