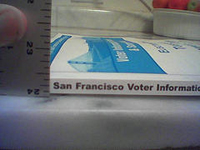 Another election, another set of ballot measures San Francisco voters will sift through. The upcoming June 8th ballot has seven local propositions, and yesterday the Department of Elections made available the ballot arguments for public review – weeks before voters get their handbook in the mail. No sexy propositions to grab much attention this year, but it’s clear the San Francisco Firefighters have taken a keen interest in this election. Many local measures reflect the City’s political split – with landlords and moderate Supervisors on one side, and tenants and the Board’s progressive majority on the other. And almost every time a proposition sounds like motherhood and apple pie because it has universal support, Republican gadfly Terrence Faulkner can be counted to pen (literally) the main “no” argument. Chris Daly is still a major subject in the ballot arguments, which makes me wonder what his rivals will do once the District 6 Supervisor leaves office. But for one measure, the Chamber of Commerce has his back.

Proposition A is a parcel tax put on the ballot by the San Francisco Unified School District, which will help retrofit school facilities. All owners will be levied $16 or $32 per year, depending on how their property is zoned. Practically everyone supports it – the official “yes” argument was signed by Mayor Gavin Newsom, Fire Chief Joanna Hayes-White, the Chamber of Commerce and Parents for Public Schools. Only Terrence Faulkner hand-wrote the official argument against it – calling it a “wasteful tax measure.”

Another earthquake safety measure on the ballot is more controversial. Proposition B is a $412 million bond to retrofit public safety buildings – including neighborhood police, fire stations and the Hall of Justice. Its official “yes” argument boasts that Prop B is supported by the “broadest coalition – the Democratic & Republican Parties, the Labor Council & Chamber of Commerce, the Mayor & the Board of Supervisors.” Signed by Mayor Newsom, Board President David Chiu, the Police & Fire Chiefs, and the V.P. of the Firefighters Local 798, it says Prop B “rebuilds and restores” our aging infrastructure.

But Supervisor Chris Daly penned the official “No on B” argument because plans would protect police from an earthquake, but not the inmate population at 850 Bryant – “leaving the courts and jails and over 1000 people there at risk.” In the rebuttal, Prop B supporters say “Daly would have us put off these safety measures until there is a proposition more to his liking. The fact is we cannot do everything at once, and we cannot afford to wait.”

Last week, I noted that the Firefighters are taking an interest in this June’s election for the Democratic County Central Committee – running three of their own for seats on that body. Now we know it’s because they are pushing Prop B. “Yes on B” has hired Stearns Consulting, and the Firefighters Union has bankrolled most of the paid arguments in favor. Their side appears to have diverse support – with paid ballot arguments by the SF Democratic Party, labor leaders, Asian-American leaders, and LGBT leaders. But while these groups all agreed to sign their names, the “source of funds” all come from the SF Firefighters PAC.

As I’ve written before, Jim Stearns frequently gets a variety of paid ballot arguments from diverse constituencies – in order to convey a broad groundswell of support for his client’s ballot measure. But look at who really “paid” for each argument, and it’s often all one source. While there’s nothing wrong with soliciting support, it looks like an Astroturf operation.

Two measures pit the “moderate” vs. “progressive” factions on the Board of Supervisors. Proposition E is Ross Mirkarimi’s ordinance (vetoed by the Mayor) requiring the Police Department to disclose how much it spends on security detail for elected officials. All seven progressives, the SF Democratic Party and Richard Knee of the Sunshine Task Force signed the official “yes” argument – calling for “no secret budgets” and noting that the City is out of step with state and federal practices. Sean Eslbernd, Carmen Chu and Police Chief Gascon opposed it, writing that Prop E “puts politics above public safety.”

Proposition F would postpone rent increases by allowing tenants to file hardship appeals when they are unemployed, lose 20% of their income, are on a fixed income like Social Security or already pay more than a third of their income in rent. Like Prop E, this is an ordinance the Board passed – but Mayor Newsom vetoed. The six most progressive Supervisors wrote the official “yes” argument with the SF Tenants Union, and we have paid arguments from tenants’ rights groups, senior activists, labor leaders and the Harvey Milk Club. “Prop F helps renters hurt by the recession,” says the SF Democratic Party.

Elsbernd and Chu also wrote the official “No on F” argument – calling it “bad policy that is poorly drafted.” Paid ballot arguments against it include Plan C, the Republican Party, landlord groups and the Realtors – who say it will do more harm than good. But there are two arguments that stand out: the Small Property Owners (who always say rent control should be means tested) say Prop F is an “invasion of privacy” because it forces tenants to disclose their income. And in a jab at Chris Daly, Professional Property Management Association asks: “Do tenants in Fairfield get to file for hardship from their landlord?”

But two Supervisor-initiated measures have near unanimous support. Proposition C, authored by Michela Alioto-Pier, would reform the Film Commission by (among other things) splitting appointments between the Mayor and Board of Supervisors. Such measures have often been controversial, but only Republican gadfly Terrence Faulkner came out against it. Alioto-Pier has clashed with Newsom over the Film Commission.

The other one – Proposition D – would reform the City’s retirement pension plan for employees hired after July 1, 2010. Police and firefighters would have to contribute 9% (rather than 7.5%) of their paychecks into the pension plan – because they get higher pensions. And it would calculate pensions as a percentage of a City worker’s salary during the last two years – rather than one year – of employment. Mayor Newsom, Public Defender Jeff Adachi and Supervisors Campos, Elsbernd and Mar signed the official “yes” argument.

Nobody weighed in against it – not even Terrence Faulkner. None of the unions oppose it, perhaps because it only affects City employees who haven’t been hired yet. In fact, fiscal conservatives like the Chamber of Commerce, SPUR, and the Republican Party all have paid ballot arguments supporting it – but say it’s just a “step in the right direction.”

Finally, in every election we have seen Chris Daly’s name get used as a bogeyman – as moderates hope to score points at the ballot box. So it was heartening to see that they are not always against his ideas. Proposition G is a non-binding policy statement to support making the Transbay Terminal the northern terminus of California’s High Speed Rail. Daly has championed this for years, and he wrote the official ballot argument in favor.

Despite it being one of those “non-binding” policy statements, and despite the fact that it’s sponsored by Chris Daly, both SPUR and the SF Chamber of Commerce have paid ballot arguments in support of Prop G. But Eve Del Castello, the Republican sacrificial lamb running against Assemblyman Tom Ammiano, still had to come out against it.