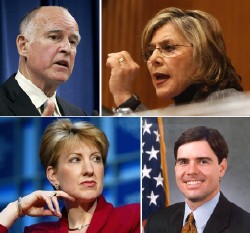 The June 8, 2010 election is not the most eventful in recent years, but it will provide valuable guidance for November. In California, the Republican Party will continue its pattern of political suicide by nominating two candidates — Meg Whitman and Carly Fiorina — who have almost no chance of prevailing in the fall. PG&E and Mercury Insurance have flooded the airwaves for their self-interested Propositions 16 and 17, with the skewed conservative turnout caused by uncompetitive state Democratic primaries giving the former an outside chance to prevail. San Francisco voters will decide whether to maintain a progressive majority on the Democratic Central Committee — and nationally, all eyes are on Arkansas, as progressives hope to send a national message through Bill Halter defeating incumbent Senator Blanche Lincoln. Here are my local, state and national picks.

I’ve been saying for some time that Jerry Brown is a shoe-in to become California’s next Governor, and the bitter Whitman-Poizner GOP primary should remove any doubts. Meg Whitman could not have beaten Brown under any circumstances, but now has been so damaged on so many fronts that this race will never even get close.

We have been reminded in the past six months that Jerry Brown is California’s most brilliant politician over the last forty years, and may well be the nation’s only longtime successful modern politician who wins competitive elections without a campaign consultant or manager.

I am no fan of Brown, but have to admire his political skills. He is never caught off guard, always on message, and now has an inexperienced opponent who is not in his league (recall that only state election Brown ever lost was to Pete Wilson in 1982, when the state was much more conservative and the experienced Wilson was at his craftiest).

Brown is also lucky. He will be running after newcomer Arnold Schwarznegger has nearly destroyed the state, undermining public faith in Whitman-like “non-politicians.”

In his first successful Governor’s race in 1974, Brown also surfed the spirit of the times. He then vowed to bring a “new spirit to Sacramento,” exactly what voters wanted after the boring and conservative Reagan years.

If you are in politics, or contemplating a future run, watch and listen to Brown carefully over the next months. You will be getting free lessons from a master.

Gavin Newsom, Dave Jones and I assume Tom Torklakson also win their respective primaries, with few paying attention to the other statewide races.

As I wrote in March, Carly Fiorina would be a dream opponent for Senator Barbara Boxer. Polls show Fiorina pulling away from Tom Campbell, who also can’t win in November but would put up a stronger fight.

I speak to a lot of progressives disappointed in Barack Obama. But I never hear progressives complaining about Boxer, a longtime environmental champions running in a state where voters care deeply about green issues.

Republicans will nominate a woman with a history of laying off workers during a period of high state unemployment. Great move.

Kamala Harris is heavily favored to win the Democratic nomination for Attorney General, likely ensuring that her Republican opponent wins in November.

Many believed from the start that Harris could not win a general election due to her opposition to the death penalty, even for “cop-killers.” This is now a moot point, as the District Attorney’s role in San Francisco’s crime lab fiasco will prove devastating to Harris’s chances in November.

If, as expected, Los Angeles County District Attorney Steve Cooley wins the Republican primary, he will be the state’s next Attorney General.

With highly competitive Republican primaries and nothing on the Democratic side that non-frequent voters care about, we could have a skewed conservative electorate. This might be mitigated by the high number of permanent absentee voters, and by polls showing Whitman and Fiorina no longer in competitive races.

My hope is that Prop 16 will be hurt by “no” votes on Props 14 and 17, and by Republican and Independents overall proclivity to vote “No.” Prop 16 is the only one of the three well-funded and deceptive measures with even a remote chance to win, but given the overwhelming newspaper editorials against it, it also fails.

Most of the attention in San Francisco involves races for seats on the once obscure San Francisco Democratic Central Committee. Political insiders are absolutely obsessed by these races, reflecting how progressive politics in the city has become so much an insiders’ game.

It matters that progressives maintain control of the DCCC, and that Aaron Peskin remain its Chair. This explains why so many progressive slate cards have endorsed an entire roster of DCCC candidates, which will make a big difference in the outcome.

Progressive DCCC candidates will sweep the city’s more liberal East Side, and do as well as necessary on the West Side to maintain the DCCC’s progressive majority. It’s worth noting that while progressives are running as a slate, well-funded moderate candidates like Scott Weiner, Keith Baracka and Mike Sullivan are running solely as individuals; this means that the lesser known and less well-funded moderates will not benefit from votes drawn to their ideological colleagues.

Most eyes are on the Arkansas Senate primary, where a once long-shot candidate backed by labor, environmentalists and core Democrats is giving corporate-backed incumbent Senator Blanche Lincoln the run for her life.

Bill Halter, the state’s Lieutenant Governor, was encouraged to challenge Lincoln by national labor groups angry at her opposition to labor law reform as well as a public option for health care. Lincoln has also been a problem on climate change, and virtually every major part of the progressive national agenda, though she has adopted Wall Street reform to “prove” her progressive credentials.

Both the AFL-CIO and SEIU invested heavily in Arkansas in 2009 because they knew that a grassroots base had to be mobilized to keep Lincoln in line. But she voted like a Republican anyway, leading labor to commit sufficient resources to Halter so that he would join the race. MoveOn, Democracy for America, and “Netroots for Halter,” which raised $3.5 million for Halter through last week, joined Labor’s backing.

Based on the most recent polls and the history of runoff elections involving an incumbent, Halter is likely to win. As I noted last week, the media will interpret a Halter win as a rebuff to President Obama, who backs Lincoln (though Bill Clinton has done far more campaigning on her behalf). In truth, it is a rebuff to Democrats opposing a progressive agenda, and Halter’s victory will send a powerful message to other Democratic Senators who think that voting with Republicans is a smart political strategy.