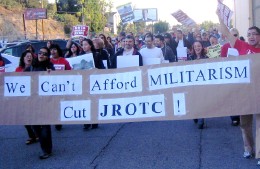 Opponents of JROTC have learned that Jill Wynns, the Pentagon’s most reliable ally on the San Francisco School Board, will introduce a resolution at its March 24 board meeting, aimed at extending JROTC for another year. This is a maneuver to buy time while the pro-JROTC forces try to deal with the fact that JROTC enrollment has plummeted since the school board withdrew PE credit for the program, in accordance with recent changes in state law. See this website for more about the upcoming school board meeting…

Back when I was a kid, which was more than a few years ago, high school students took four years of physical education (PE), and that was that. I was flabbergasted a number of years back when San Francisco schools reduced the PE requirement to two years, apparently in line with the trend at many other California schools. I remember one particular school board member complaining that she had been embarrassed when she had to change her clothes in the locker room. Of such things policy is made.

But a more serious controversy than locker-room embarrassment has led to the introduction of three different bills in the state legislature concerning PE requirements and standards, all aimed primarily at giving students PE credit for participation in the controversial JROTC program (Junior Reserve Officers’ Training Corps).

At the moment, the fate of JROTC in San Francisco hangs on this battle, taking shape in the hinterlands of Sacramento. Currently, JROTC is scheduled to be phased out in San Francisco in June. But the proponents of JROTC are staking their last-ditch defense of the program on trying to maneuver the state legislature into mandating PE credit for JROTC cadets. If they succeed, the politics of the SF school board could shift toward reinstating the program. If they fail, JROTC here is likely gone.

Consequently, there is a tale to tell for those who care about either PE or JROTC, or both.

A couple of years ago the pendulum began swinging back toward tightening up PE standards and requirements. “Increasing state and national attention has focused on the declining health of our youth and the critical role that schools play in addressing that decline,” wrote John Affeldt, Managing Attorney of the well-respected public interest law firm Public Advocates, which has historically litigated on this issue.

In 2007, the California legislature passed a bill that fortified PE curriculum and teaching. This bill, SB 601, was introduced by Tom Torlakson, now an Assembly member from Contra Costa County, and a member of the Assembly Education Committee. The bill was dutifully signed by Governor Arnold Schwarzenegger, whose credentials as an advocate for physical fitness are well known.

The trend toward taking the health of our youth more seriously wasn’t greeted with unanimous praise. The new law threatened programs that had often been allowed to substitute for real PE classes — including marching bands, drill teams, and JROTC. Although the new PE standards have been unevenly enforced in different school districts, where they have been applied, JROTC programs in particular have taken a hit. Here in San Francisco, PE credit was withdrawn for JROTC cadets this school year, and enrollment dropped from a high a couple of years ago of 1,600 cadets to about 500 today.

Some supporters of JROTC claim that students just don’t have enough hours in the day to take both PE and JROTC. Even some JROTC supporters disagree, pointing out that students find time for many other school activities, ranging from competitive sports programs to music programs to chess clubs, even though they have to take PE classes as well. Opponents of JROTC openly scoff at these claims, arguing that PE credit has been used by JROTC instructors as a recruiting tool for their program, and that the steep drop in JROTC enrollment when PE credit was withdrawn actually demonstrates that students are a lot less interested in JROTC than the proponents would have us believe.

Among the three current backlash bills, the first up was AB 223 from Fiona Ma (D-San Francisco). I have written about this bill before. It would grant PE credit to all JROTC cadets, and require all San Francisco high schools to have JROTC programs. Introduced as an “urgency” resolution requiring a two-thirds vote to pass, this bill is not likely to get much traction. San Francisco’s other Assembly member, the popular Tom Ammiano, opposes Ma’s bill, and sits on the Education Committee, where any of these bills is likely to be heard. The bill also treads mightily on the local school board’s prerogatives, angering even JROTC supporters on the board. “Fiona Ma is just grandstanding,” says Marko Matillano, the coordinator of Military Out of Our Schools.

Next up appears to be AB 554, introduced by Assemblyman Warren Furutani (D-Long Beach). Furutani’s bill is part of a package of bills in support of “career technical and vocational education” in both community colleges and high schools, including additional funding. AB 554 would allow students taking “career technical courses,” including JROTC, to graduate without taking the full set of PE, foreign language or art courses. These are all classes required by most colleges, making it clear that the intent of Furutani’s bill is to put some students on a “vocational” track.

Furutani’s bill makes hash of the argument by many JROTC supporters that it is not a military recruitment program, and that most JROTC cadets are headed to college. If JROTC is a “career” class, it is obviously a military career to which it leads. Allowing JROTC cadets to dump college course requirements assures that they will have fewer higher education options, and more pressure to join the military.

Furutani’s bill has been assigned to the Assembly Education Committee, and is expected to be heard on April 1.

Finally, there is AB 351, introduced by Mary Salas (D-San Diego), which grants PE credit to JROTC, marching bands, drill teams and interscholastic sports teams. San Diego, of course, is a military town. When their school superintendent opined a while back that JROTC there might lose its PE credit, the school board went into a panic. The board passed a resolution asserting that they had the authority to give PE credit to JROTC cadets, set in process a request to the California Department of Education for a waiver of state rules against granting PE credit, and apparently recruited Assemblywoman Salas to introduce her bill.

This throw-everything-including-the-kitchen-sink approach has so far not solved San Diego’s problem. Not even the school board seems to think that their resolution holds water, it is not known when their waiver request will be heard, and the Salas bill has not yet been assigned to committee.

But the Salas bill may prove to have the best chance of passage of the three bills. It has the virtue of doing just one thing — granting PE credit to a limited number of non-PE classes — while attempting to forge an alliance between JROTC, marching bands, drill teams and sports teams.

Late breaking news: It appears there is a move afoot to consolidate the Salas and Ma bills. Stay tuned…

Opposition to all three bills is significant, and growing. The California Association of Health, Physical Education, Recreation & Dance (CAHPERD) has launched an “Urgent Action Alert” aimed at defeating these bills. Both the mammoth Los Angeles Unified School District (LAUSD) and the LA teachers’ union (United Teachers of Los Angeles/UTLA) are moving into opposition. LA is one of the few school districts that has made serious efforts to bring JROTC into compliance with state PE standards, including encouraging JROTC instructors to get real PE teaching credentials.

“To exempt students from physical education requirements would send the wrong message and lead other organizations to do the same,” writes Chad Fenwick from the LAUSD Office of Government Relations. “This would be a slippery slope that could have major economic health care costs.”

Those who want to get into this fight should let their state legislators know what they think, particularly your Assembly representative, and members of the Assembly Education Committee.

Marc Norton is a bellman at a small hotel in downtown San Francisco. He has two sons who attended Alvarado Elementary, James Lick Middle and Lowell High schools. Contact him at nortonsf@ix.netcom.com, or through his website at www.MarcNorton.us.