Join the Military, Become a Missionary 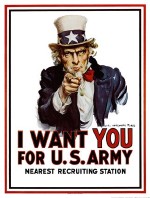 An official military suicide prevention program that openly promotes religion over no religion and Christianity over other faiths? U.S. military personnel spreading the so-called word of God to Iraqis and Afghans via Bibles supplied to them by a fundamentalist group? A military cable channel that features fundamentalist Christians preaching the word of their deity to the troops?

Are these things kosher under the U.S. Constitution? Not according to the Military Religious Freedom Foundation (MRFF), a watchdog group that looks out for the rights of soldiers not to be proselytized while in uniform. MRFF recently amended its federal lawsuit against the U.S. Department of Defense to include what it terms “despicable unconstitutional promotions of fundamentalist Christianity in the combat zones of Iraq and Afghanistan.”

The original suit, filed in U.S. District Court in Kansas City, Kansas in September, charged that co-plaintiff Spc. Dustin Chalker and a host of other service members, were unable to resolve, through military channels, their complaints of being pressured to convert to Christianity. Chalker is an out atheist.

The expanded suit contends that the Army went even further in violating the rights of atheists such as Chalker: It produced two cable programs on its military channel that violate the constitutional ban on the government promoting a state religion. One of the shows featured Christian extremists Will Decker and Tim Scott who have dedicated themselves to preaching the Christian gospel everywhere on the planet. The other is called “God’s Soldier.”

In the latter program, Capt. Charles Popov, a chaplain, is seen calling on his god to help a group of soldiers, in his words, “exterminate the enemy and to accomplish the task that they’ve been sent forth by God and country to do.”

It gets worse. The U.S. military has a special project to convert Iraqi citizens to Christianity, according to the suit. The Public Record, an online magazine that promotes independent journalism, reports that “Bible Pathway Ministries, a fundamentalist Christian organization, disclosed that the organization provided thousands of a special military edition of its Daily Devotional Bible study book to members of the 101st Airborne Division of Fort Campbell, Kentucky, currently stationed in Iraq.”

Soldiers are carrying the Bibles along with them on patrols “to minister to the local residents,” said Chief Warrant Officer Rene Llanos of the 101st Airborne. Welcome to the new crusades.

Though the military is refusing comment on the pending lawsuit, MRFF founder Mikey Weinstein, who wrote With God on Our Side: One Man’s War Against an Evangelical Coup in America’s Military, summed up his group’s position very simply: “Our amended complaint is specifically designed to further stab at the throbbing unconstitutional heart of darkness that comprises the systemic fundamentalist Christianity so pervasive and pernicious in today’s American armed forces.”

Join the military, become a missionary.