Joe the Plumber Needs a Union 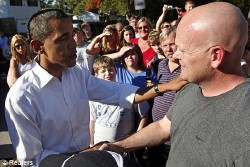 Under current National Labor Relations Board rules, the right to vote for a union has been corrupted to mean that your boss has the right to fire you, deport you, blackball you or run you out of town if you exercise that right. You can complain, and if your case ever gets heard before the Republican appointed Board you might get your job back two years after you were fired if you were still around to want it back.

Bosses organizations like the National Association of Manufacturers (NAM) and the Chamber of Commerce make a big deal about a secret ballot election. That’s fine as far as it goes but right now you never make it to the secret ballot election because you are likely to get fired, laid-off, or be restructured out of a job if the boss finds out you are pro-union in a union election drive.

In one of those inverted projections, it’s the bosses who get in the way of a secret ballot election, not the union. Under the current NLRB set-up the boss can fire you or deport you before you ever get there. That’s why bosses love it so much and like to sound all high minded about it.

I met a South African Trade Unionist at the Harvard Trade Union Program where I studied for three months with Trade Unionists from all over the world. My classmate was a leader in the South African Mineworkers Union, a union instrumental in the overthrow of Apartheid. He, like me was also a legal worker and what he said about our legal system has stayed with me all these years later.

“Even under Apartheid,” he said, “we had better labor laws than you do in the States.”

He was right. In the US the boss’s power to fire you to is equal to your right to vote yes for a Union.

That’s why unions like SEIU have successfully undertaken extra-legal community based strategies that don’t rely on the NLRB to organize workers. They built campaigns using strategies that bypass the NLRB like they did in the successful Justice for Janitor’s campaign. Farm workers and domestic workers are specifically excluded from coverage under the NLRB, so campaigns to organize them, like those successfully undertaken by the United Farm Workers had to also rely on strategies outside the law.

Under the Employee Free Choice Act, if Jane decided that she wanted to start a Union in a workplace where there wasn’t one, and Jane along with her co-workers got organized and fifty one percent of them signed cards saying they wanted to form a union, they could have a union. Period. End of story.

“Card check” as it is known and practiced in some public and private sector jurisdictions has resulted in increased Union growth. That’s what McCain and is cohorts are worried about. They don’t give a hoot about a secret ballot election. They’re worried about having to provide a living wage, health care, retirement and to protect against workplace discrimination.

Under the Employee Free Choice Act Jane couldn’t be as easily fired for exercising her right to vote for a union. She’d have that right guaranteed by law just like her right to vote. In no other industrial country is this right so blatantly corrupted. In other countries where the right to form a union is respected as a Civil Right workers have universal health care, there is cap on CEO salaries, and the income gap is much narrower.

US union density is hovering around 12%. National polls show that 70% of American workers would vote YES for a union if given the opportunity to do so. It makes sense that they would. That they would vote positively in their economic self-interest. Given the economic shape we are in right now after eight years of Republican rule, its time for working people to “share the wealth.” But unlike the straw man that John McCain set up with Joe the Plumber, its time to share in the wealth created by American workers whose labor has enriched the top 5% of the countries wealthiest corporate interests and individuals.

It’s our time. It’s time for American workers to get paid.