Joe Elsbernd, Supe’s Dad Who Grew Up in the Tenderloin, Dies at 64 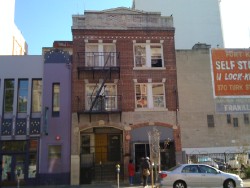 Joe Elsbernd, who followed his early years living above the 222 Club at Turk and Hyde Streets with a longtime career as an educator and parent, died last week after a long bout with cancer. I had the great fortune to meet Joe when his son, San Francisco Supervisor Sean Elsbernd, told me that his dad had grown up in the Tenderloin and might have information helpful to our plans for an Uptown Tenderloin Historic Museum. When Joe called me he said he was dying from cancer and it was taking a lot of his energy. I replied that I was sorry to have bothered him, but he insisted we meet so I could record his recollections of the Tenderloin of the early 1950’s. We got together the very next day.

Joe grew up above the restaurant/bar at the 222 Club, owned by his grandfather and where his father worked. When Joe was four, he would get a new neighbor: the soon to be world famous Blackhawk Jazz Club.

Growing up above a bar and next to a jazz club where lots of liquor was sold may strike some as inhospitable to a healthy upbringing, but Joe and his brother had a great time. He particularly enjoyed New Years Eve, when the partying below and next door created great fun and excitement for young Joe.

Joe pointed out to us that the Tenderloin was different in those days. He felt safe walking the sidewalks alone as a young child, and liked going to the many corner grocery stores. Joe attended Catholic school in the neighborhood, and would spend his entire life first attending Catholic school, then teaching, and then becoming the principal at St.Paul’s, St. Michael’s and St. Thomas More.

Joe’s family moved out of the Tenderloin when he was seven, so some of his memories were a bit foggy as to place. But despite his visibly weakened state, Joe was determined to try to get his facts right, and to give us everything he could remember about his early days in the neighborhood.

To give a sense of Joe’s condition when we met him last, he was too weak to walk into our offices. Much of our interview took place in his daughter Meghann Jo’s car — she was driving Joe — and his breathing was often interrupted.

Meghann Jo drove us all to the museum’s future home in the commercial space at the Cadillac Hotel at Eddy and Leavenworth, and Joe made a Herculean effort to go from the car to the ground floor space. It was again clear that what was motivating him was not a need to tell a story that he never thought anybody would be interested in, but rather it what was part of a lifelong desire to try to do his best to help others.

My colleague, Sarah Wilson, and myself were absolutely blown away by Joe’s powerful desire to recall his memories, and to give us every ounce of information that could help our project. When we parted I immediately called Sean to tell him how his Dad had gone well beyond the call of duty, and how he pledged to go through his belongings to see if he had anything left from his Tenderloin years.

The good news is that we have preserved Joe Elsbernd’s entire account of his Tenderloin years, and have footage of our interview. He filled in an important gap in the community’s history.

We often hear about people who built up the essential fabric of modern day San Francisco. Joe Elsbernd is on this list.