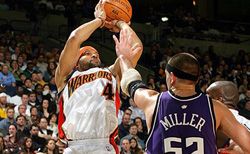 (with editorial assistance from Nate Schneider)

Those of us over here in the corner trying to drown the Bay Area’s pro football disappointments, and hoping for a real Warriors renaissance (and you gotta like their chances after they swapped a Speedy for a Baron), started discussing the great centers in NBA history. No disrespect intended, but Tim Duncan isn’t one of them. The true aficionado and basketball historian instantly conjures Wilt Chamberlain and his imperial fadeaways and dunks . Nate Thurmond crashing the boards . Bill Russell’s goatee swooping intimidatingly over anyone with the temerity to penetrate . Bill Walton passing from the pivot like a Deadhead . George Mikan doing whatever it was that someone once told me he used to do. Not Duncan. He’s just too much of a gentleman. Another nine championships with the Spurs will never erase that image.

Speaking of which: San Antonio Spurs, NBA champions? Is that a joke, or what? Give me the Celtics of Cousy-Russell-Heinsohn-Havlicek-Jones (Sam or K.C., take your pick) any day. Or the Lakers of West-Baylor or Magic-Kareem, or the Knicks of the early seventies. One of the latter’s starting five even ran for president! Even if Tony Parker were eligible to run for president — which he isn’t because he’s French — he wouldn’t get past the Iowa caucuses once the paparazzi started hounding him and Eva Longoria. Sure, Bill Bradley hardly got past the Iowa caucuses himself, but that was a sheer fluke. If anyone had Commander in Chief written all over him, it was Dollar Bill. Sharpest elbows this side of a picket line..

Baseball people in the know question A’s GM Billy Beane’s investment in free agent Esteban Loiza. Sources in three cities where he’s pitched say Loiza doesn’t like to talk to the media after a loss — and when he does it’s almost always with an accent. Not having stand-up guys who speak the King’s English is widely known to be bad news for clubhouse chemistry..

A few years later and you have to admit Eli Manning made a smart move in forcing the San Diego Chargers to unload their draft pick for him to the New York Giants. I know, the Chargers look tough this year. But you don’t win a Super Bowl with a quarterback named Drew. One bad day from LaDainian Tomlinson and it’s curtains..

The Brothers Manning — has there ever been a more royal fraternal QB brand? The Ditmers would never make the cut. The Hasselbacks? Pathetic frauds — Tim once had a zero passing rating for an entire game, Todd will choke in the playoffs with the Seahawks again this year, unless he doesn’t. But Eli, please please lose that first name. It sounds like the cantor in Southern California my dad once tried to promote into a jazz career before our neighbor Jim Murray (still the greatest sports columnist ever) talked him out of it. Fortunately for this Eli’s legacy, he’s playing in a market that can handle all manner of idiosyncrasies..

Loungers caught Bengals WR Chad Johnson’s TD celebration — pulling out an end-zone pylon and using it as a putter — and gave the act a resounding thumbs-down. Don’t try that stunt unless you’re a Sanders, a Moss or an Owen. And tuck your shirt in, son. Does anyone around here have any class since Jerry Rice retired?..

The most overlooked aspect of the TO circus — and are you as sick as I am over how much ink, air time and Internet space are being wasted on that nut? — is what a wimp Donovan McNabb turned out to be. The whispers in the Eagles’ locker room are to the effect that he’s simply bailing on his teammates after throwing that late game-turning interception against the Cowboys. “Sports hernia,” my foot. When Johnny Unitas missed a full season after arm surgery, you can be sure it was the real deal. Same for every other NFL warrior who was out of action the year I turned 12..

Mets GM Omar Minaya better hope his owners will still pony up for Manny Ramirez after Minaya turned to a second-tier slugger, Carlos Delgado. It’s good that Delgado says he’ll now observe “God Bless America” during the seventh inning stretch, but that won’t rescue him from the pressures of New York the first time he has a 2-for-27 stretch. Love Delgado’s numbers; still, that stance of his could use some work. (When you think of the batter’s box presence of a superstar, any list has to start with Joe Morgan and his chicken-wing twitch. Pure baseball majesty.) Delgado has had his share of run-ins with the media throng in backwaters like Toronto and Miami. Can you imagine the heat he’ll draw in the Big Apple? And of course there’s that accent. Ramirez has an accent and an attitude. Then again he’s Manny Ramirez..

Indianapolis looks like a lock for 16-0 after that convincing Monday night win. The Colts did more than just put up19 more points on the scoreboard than the Steelers. They added a new weapon that should serve them in good stead in the postseason: a judicious dose of trash talk that left one of the NFL’s most physical teams reeling..

The BCS lucked out with a true national championship game this year between USC and Texas. But it’s mind-boggling that the morons who run college football haven’t figured out the obvious long-term solution. In this age of cable, satellite and pay-per-view technology, there’s no excuse whatsoever for not staging a tournament among all 119 Division I-A college football teams — starting on Dec. 1 and climaxing on New Year’s Day. You wouldn’t even have to overlap more than two games at a time after the first round or two, and replay and video-on-demand fees would bring in a pretty penny. Simply incredible how stupid the clods at the NCAA can be. What a bunch of losers. And they care nothing about the people who make their corrupt system possible in the first place — the fans.

Is Retief Goosen a South African golfer or a flock of a diminishing Canadian aviary species? Get out of there, or at least put on a skirt like Fred Funk..

Take it from us, LeBron James is not the next Michael Jordan. The James part is fine, but LeBron? Ugh. Neither is Dwyane Wade, who parents took the desperate measure of transposing letters in his first name, and neither were Bryant, Carter or McGrady before them. Think of it this way: Can you picture any of these guys on their best day managing to build a dynasty, almost singlehandedly and in flyover country to boot? There was only one MJ, just as there’s only one Barry Bonds — for better or worse.

Irvin Muchnick’s website, which he insists plans to add links to his occasional contributions to Beyond Chron, is http://www.muchnick.net.