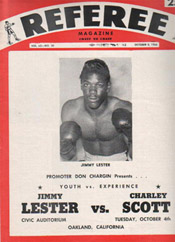 Jimmy Lester, who went from boxing hero to a life of unemployment living in Tenderloin SRO’s, died Saturday at age 61. I first met Lester in 1982 when he was living on welfare with his wife and young kids in the Columbia Hotel on O’Farrell Street. His room had no heat, and I was there with Warren Hinckle from the San Francisco Chronicle to document what became the “heatless hotel” scandal. Lester never asked for a handout, he simply wanted heat in his home and my assurance that he would not be evicted for complaining. Although he was only 38, America’s economic policies had already consigned him and millions of other unskilled workers needing blue-collar jobs to the scrapheap of history. Lester’s death may be little-noticed, but his life was an American tragedy that deserves our attention.

I knew Jimmy Lester for 24 years. In recent years I found his mental and physical deterioration deeply upsetting. The stroke that befell him in 1997 was just the latest blow to a good man who got a raw deal from America.

Lester was born and raised in San Francisco’s Bayview district. When Jimmy Lester was 19 years old, he won his first boxing fight by knockout. Although he twice was ranked as the No. 2 middleweight contender, he never got a chance to fight for the title.

Like Marlon Brando’s Terry Malloy in On the Waterfront, Lester could have been a contender but never got his shot at the big prize. Instead, he joined Malloy in getting a one-way ticket to Palookaville.

Lester’s boxing career ended in 1973, when he was only 29. This is a time when many Americans are just building their careers and family lives, and look forward to a bright future. Lester got a job with the San Francisco Police Department after leaving boxing, but was living on welfare with his family in the Columbia Hotel when I met him in December 1982.

When I met Jimmy, he was among thousands of formerly employed African-American men in San Francisco who were either homeless or close to it. The early 1980’s was a terrible time to be an unskilled 38 year-old worker. Plant shutdowns and “deindustrialization” eliminated hundreds of thousands of well-paid, unionized factory and blue-collar jobs. When African-Americans in particular lost such jobs, they faced an even greater struggle to obtain permanent employment.

Jimmy Lester confronted a Bay Area job market in the early 1980’s that had no use for his services. He was a good man, an honest man, but he had no college experience, lacked office skills, and the warehouse or longshoremen jobs once available to strong-backed males were gone.

Lester got some extra money by taking his landlord to the Rent Board, but spent most of the next twenty- three years living in SRO’s. He lived from May 2001 to the end of 2005 in the Tenderloin Housing Clinic’s Hartland Hotel, until his health deteriorated and he was moved to Laguna Honda hospital.

During his time at the Hartland, I would see Jimmie when he came to our office to pay rent. After his stroke in 1997, Lester was a physical wreck who had difficulty communicating. His son often came in his place, and while the Chronicle obituary only mentions Jimmy Lester Jr as being in prison in for a marijuana arrest and probation violations, he was a good son who, like many African American men of his age, became ensnared in the criminal justice system.

Today in San Francisco, we could get a 38-year old Jimmy Lester a job in one of the Clinic’s SRO hotels earning good pay with full medical benefits for his family. But these options remain few and far between for unskilled workers of that age or older, particularly when they are African-American.

In all of my interactions with Jimmy Lester over the years, he never complained about his fate. I’d always ask him how he was doing and he would smile and say he was “getting by.” He would then ask how the Clinic was doing, and promised to say hello the next time he was around.

Lester’s death at the young age of 61 is all too typical of SRO tenants, whose life expectancy is well short of the national average. He was happy at the Hartland Hotel, so at least he spent the last years of his life in peace.