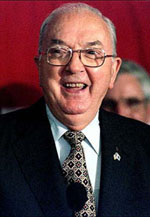 People say you shouldn’t speak ill of the dead. That can’t possibly apply to Senator Jesse Helms who, for his many decades in public life, advocated nothing but bigotry and repression. Helms died on July 4 of natural causes. He was 86.

A Republican senator from North Carolina who served in Congress from 1972 to 2002, Jesse Helms made few, if any, friends among the disenfranchised in America. He was a strong opponent of integration, affirmative action, LGBT rights, abortion, welfare, and freedom of expression in the arts.

Helms attacked the National Endowment for the Arts when it was discovered that individual grants had been used by artists to create homoerotic and blasphemous art. He opposed reparations for Japanese Americans unjustly interned in camps during WWII. He backed right-wing dictators in Latin America, and came out against a national holiday for slain civil rights leader Martin Luther King.

Dubbed “Senator No” because he made a career out of opposing social change legislation, Helms started out as a conservative radio announcer, then was later elected a City Councilman in his hometown of Raleigh.

The stories of his bigoted comments and campaigns are well-known. During a debate on then-President Bill Clinton’s nomination of Roberta Achtenberg as assistant secretary of HUD (Department of Housing and Urban Development), Helms quipped, “I’m not going to put a lesbian in a position like that. If you want to call me a bigot, fine.” He also described Achtenberg as “that damn lesbian,” a phrase that subsequently became popular among queers.

In his senatorial race against former Charlotte Mayor Harvey Gantt in 1990, Helms’ campaign ran a TV ad with a white fist holding a crumbled job application. The caption proclaimed: “You needed that job, but they had to give it to a minority.”

In February 1981, he wrote in the New York Times: “Crime rates and irresponsibility among Negroes are a fact of life which must be faced.” He told the Charleston Gazette in September 1995 that the University of North Carolina was the “University of Negroes and Communists.” According to Time Magazine and Gannett News Service, he once sang Dixie to black Democrat Carol Moseley-Braun in a Capitol elevator in order to make her cry.

After being the target of a protest during a visit to Mexico in 1986, Helms said, “All Latins are volatile people. Hence, I was not surprised at the volatile reaction.”

During the AIDS crisis in the 80s, Helms vehemently opposed funding to fight the disease, saying that gays brought it upon themselves. “Nothing positive happened to Sodom and Gomorrah, and nothing positive is likely to happen to America if our people succumb to the drumbeats of support for the homosexual lifestyle.” Though in later years he supported money to fight AIDS among heterosexuals in Africa, he never stopped being a rabid homophobe.

Helms’ legacy: Nothing America should be proud of.