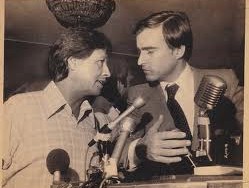 For all of his lurches to the right, disdain for public input, and refusal to work collaboratively, California Governor Jerry Brown has always been defended by those who appreciated his support for Cesar Chavez and the farmworkers movement. Brown signed the landmark Agricultural Labor Relations Act in 1975, and only Robert Kennedy rivals him as the UFW’s greatest political ally. Brown admired Cesar Chavez and sought his approval; the UFW responded by providing key staff support for his 1976 and 1980 presidential campaigns, and by building Latino support for all of his California races. Despite this legacy, on June 28 Brown vetoed a farmworker organizing bill that his Republican predecessor had vetoed four times, and which had broad Democratic Party support. Brown’s alignment with wealthy growers against indigent workers picking crops in the fields surely has Chavez turning over in his grave, and shows that the Governor views the UFW as just another group he is willing to betray.

The UFW has taken its share of hits in recent years, with many arguing that the union has long foregone the grassroots organizing once critical to its success. But former California Governor Schwarzenegger vetoed UFW bills allowing workers to unionize by signing cards rather than requiring an election four times, and most assumed that the measure would be signed by new Governor Jerry Brown.

This assumption was wrong.

After months spent avoiding criticism of Republicans and then recently bashing Democrats after vetoing their initial state budget, Brown found a new way to show corporate interests that he is not “controlled” by organized labor. And his veto message used some of the same arguments – i.e., the bill was too “far reaching” – that employers relied upon to kill the Employee Free Choice Act.

After taking office, Brown actively courted the Chamber of Commerce and other corporate interests for help in securing the Republican votes needed for a special election to extend tax increases. But Brown vetoed the UFW bill after these efforts failed. So Brown traded off the interests of poor and disenfranchised farmworkers as part of a deal that gained nothing for progressives.

Don’t think for a moment that Brown did not consider the political fallout. But he can now sign AB 130, one of two bills identified as the “California Dream Act.” AB 130 allows undocumented students to use scholarship money so long as it is not from public funds, while the companion bill (AB 131) goes further by allowing these students to access the same public grant programs as all other Californians (given the budget crisis, this bill is considered to have little chance).

By signing AB 130, Brown can claim he delivered for his Latino base. He can then sign a number of labor-backed bills benefiting unions other than the UFW, leaving the farmworkers with little recourse other than returning with a revised bill next year.

It’s not news that Jerry Brown is a cynical and calculating politician. But many thought that Cesar Chavez and the UFW were among the few interests he would not betray.

If Brown had retired from politics in 2010, his relationship with Chavez and the UFW would have topped his forty-year political legacy.

Brown’s initial stint as Governor is most recalled for his relationship with singer Linda Ronstadt, his presidential runs, and the tag of “Governor Moonbeam” (an epithet used by critics angry at his visionary support for alternative energy, creative appointments, and willingness to both think and act outside the box). Brown’s record on Prop 13 is mixed (he opposed it but then so zealously implemented it that most voters later thought he was a Prop 13 backer), and most of his accomplishments from 1975-82 are forgotten.

But everyone remembers how Brown brought victory to the UFW’s thirteen-year campaign for farmworker labor rights. And despite reversals in the fields over the past three decades, California remains the only state that gives farmworkers the same labor rights most other workers got from the National Labor Relations Act in 1935.

While Jerry Brown is criticized as governing by the political winds, the UFW was the great exception. Latinos were not a statewide political force in the 1970’s, and labor’s strength in California was nowhere near what it is today. In contrast, growers and corporate interests were very powerful, and attacked Brown for his support of Chavez and the farmworkers movement.

Brown can build a legacy as the Governor who got the state back on course after the ruinous Schwarzenegger years, but budget problems come and go. The current crisis will not be remembered by future generations.

Brown’s UFW legacy, however, will be remembered. The students who study Cesar Chavez and the farmworkers movement will wonder why Brown changed sides in 2011, backing the rich against the powerless. They will wonder why Brown could not support the UFW’s efforts to rebound, instead of pushing it further down.

It may be that Brown in the 1970’s was primarily motivated by his admiration (and fear) of Cesar Chavez, rather than concern with workers in the fields. But Chavez has to be turning over in his grave over the veto, and would be outraged to see Jerry Brown of all people so eager to demonstrate to corporate California that he is not in the UFW’s pocket.