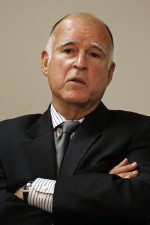 I nearly fell out of my seat yesterday reading the San Francisco Chronicle’s puff piece on Jerry Brown – as the Governor reflected on his first year in office. Apparently, Brown “did not expect” that Republicans in Sacramento would refuse to raise taxes – and that a ballot measure to raise revenue (even the pitiful, watered-down effort the Governor is waging now) was inevitable. Brown is a savvy, 50-year veteran of California politics – so to suggest he was naïve to something that Grover Norquist politicians had made crystal clear over the past decade is laughable. But it’s also insulting because Jerry Brown himself obstructed much of what Democrats in the legislature pushed in 2011 – from vetoing the state budget in June, to vetoing Mark Leno’s legislation in October for a local vehicle license fee, to undercutting a real grassroots effort for a “millionaire’s tax.” In a lot of ways, it’s even worse than President Obama being surprised that Republicans in Washington DC did not want bipartisanship.

I’m not going to raise a Casablanca analogy, because readers can make it themselves. In an interview with the Chronicle’s Wyatt Buchanan published yesterday, Jerry Brown said one regret he had on his first year as Governor was that he did not expect how recalcitrant the Republican minority in the legislature would be.

“I learned that Republicans can’t vote for a tax,” he said. “That was not evident.”

Brown must not have been paying attention, when he was Mayor of Oakland from 1998 to 2006 – and California Attorney General from 2006 to 2010. During that time, virtually all Republicans in the Assembly and State Senate have signed the Grover Norquist tax pledge, saying they will never vote for a tax increase in any way, shape or form. It led to the budget crisis in 2003 that kicked Gray Davis out of office, and it plagued the whole Schwarzenegger Administration.

As far back as 2002, any Republican in Sacramento who defected on the “no tax” pledge got a right-wing primary challenger – supported by the Party leadership. In 2009, when one member dared suggest some tax increases are inevitable because both sides have to make concessions, Los Angeles radio shock-jocks John and Ken put up a graphic on their website with his head severed on a pike. Later that year, when the State Senate Minority Leader voted for Governor Schwarzenegger’s compromise budget measure, his Republican colleagues immediately voted to strip him of his title.

It was obvious to even the most casual observer that Republicans would never support any tax increase. In a deep-blue state like California, the GOP can never hope to win a majority. In other states, the possibility of running the legislature (if they play their cards right) gives Republicans an incentive to be reasonable. But in California, they only need to listen to their Tea Party base. A 2009 study by University of Chicago researchers compared all 50 state legislatures, and found California Republicans to be the most conservative – even worse than Texas.

And it has given us a blue state with an Alabama budget. Every single year, the GOP minority used and abused the “two-thirds” vote requirement to pass a state budget – obstructing simply because they could. We finally passed Proposition 25 in November 2010 that allows a simple majority to pass the budget – but tax increases still need two-thirds. And in a classic example of “one step forward, two steps back,” voters also passed Proposition 26 – which requires a two-thirds vote in the legislature for fee increases.

So pardon me if I don’t believe Brown could be so naïve to expect anything less. And I don’t have much sympathy even if it were true, because as Governor Jerry Brown has actively made the situation worse – by empowering the GOP minority with his veto pen.

2011 was the first year that we could pass a budget with a simple majority – and with tough fiscal times, Democrats made tough choices that directly hurt their constituencies. As Art Pulaski of the California Labor Federation said in June: “it’s a profound shame that as a result of Republicans blocking a fair budget, California families are left exposed by budget uncertainty that could lead to more cuts to schools, public safety and other important services down the line. This budget is the only current viable solution to prevent massive, immediate cuts that would crater our economy for years to come. We urge the Governor to sign.”

Instead, Jerry Brown vetoed the budget – which effectively forced the legislature back to the drawing board, empowering Republicans to demand even further budget cuts and concessions.

While our state’s schools and hospitals crumble amid Sacramento’s turmoil, many have advocated we should empower local government to raise revenue. If Orange County voters want to live in their gated communities and send GOP obstructionists to the State Capitol, liberal places like San Francisco should have the right to step in and address their problems with taxes. Which is why the Democratic legislature passed State Senator Mark Leno’s SB 223 – to allow for a local vehicle license fee. The legislature had passed this in prior years, but Arnold Schwarzenegger had vetoed it numerous times.

Guess what? In October, Jerry Brown vetoed it too – calling it a piecemeal approach. “What does he think that we’ve been doing unsuccessfully for the past eight years,” Mark Leno told the Bay Citizen at the time. “Arnold Schwarzenegger destroyed this state by eliminating a revenue source worth $6 billion annually to California – that was the vehicle license fee.”

Now, Governor Brown says we need to put a tax increase on the ballot in November 2012 – because we’re in a budget crisis, and the state needs more revenue. But rather than galvanize the state against these right-wing obstructionists and tap into the frustration against the 1%, Brown has strong-armed unions and the Democratic leadership into raising the sales tax and a very modest income tax increase on most Californians that will expire in four years. Meanwhile, progressives like the Courage Campaign have proposed a much more popular “millionaire’s tax” that only affects those making over $1 million a year – and taps into the populist anger of the Occupy movement.

Suddenly realizing that Republicans aren’t going to compromise while actively starving the public sector certainly makes Jerry Brown look like Barack Obama. But Brown should not get away with it like Obama does. In The Bridge, the most comprehensive biography of the President to date, author David Remnick describes how Obama was elected President of the Harvard Law Review with support from conservative students. As I wrote in a May 2010 review of Remnick’s book, “dealing with Republicans in Congress was a wholly different ballgame that Professor Obama was [not] prepared to understand or appreciate.”

Jerry Brown doesn’t have Obama’s excuse that he was somehow “new” to the scene. He is a savvy politician who was Governor for two terms in the Seventies, and then came back in the late Nineties – while Republicans were getting more and more controlled by their Party’s right-wing. And It’s an outrage that the Chronicle gave him a pass.