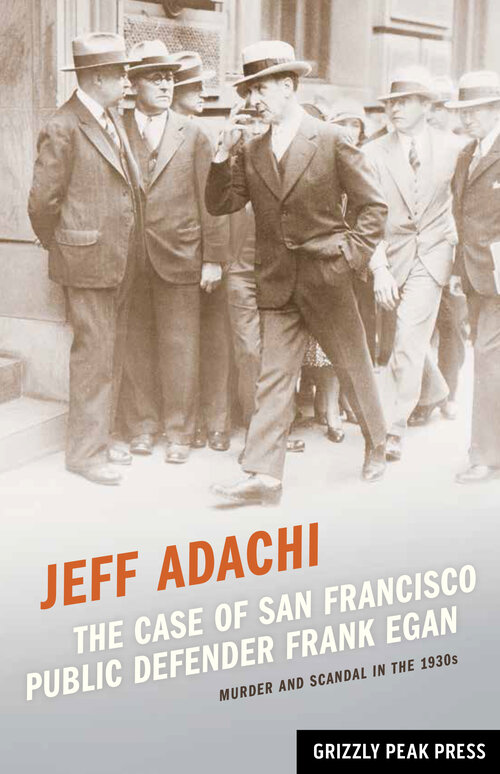 Adachi died on February 22, 2019. It remains a tragic loss for San Francisco.

If you haven’t heard of the 1932 trial of Frank Egan, do not feel bad. I had never heard of the case despite writing about equally famous trials connected to San Francisco’s Tenderloin and City Hall graft for my book, The Tenderloin: Sex, Crime and Resistance in the Heart of San Francisco.

Adachi reclaims a lost slice of San Francisco history, uncovering a story that deservs to be told.

Hundreds of “film noir” films were made from the 1930’s through the 1950’s. They featured “double indemnity” murder for hire plots, corrupt men in power, and suspicious women. Many were set in San Francisco, and Dashiell Hammett helped launch the noir genre with stories set in the Tenderloin where he lived.

Adachi’s story unites many classic film noir themes. Yet if he had written the exact events of this book in a novel or screenplay, it would have been rejected as too far-fetched to be believed.

Frank Egan, a prominent and highly skilled criminal defense attorney—and the city’s first official Public Defender—was put on trial for allegedly committing actions that seem unbelievable for someone of his background. Once Adachi recounts Egan’s activities early in the book the reader is hooked on learning whether justice will be done.

Criminal defense attorneys know that small details matter. Adachi captures these in recounting the murder of 57-year old Jessie Scott Hughes on April 29, 1932. The biggest detail highlighted in the opening pages is that when Hughes body was dumped from a passing car she ended up facing the wrong way—this raised doubts that her death was caused by a hit and run accident.

Frank Egan, the first and only person at the time to have held the title of Public Defender in San Francisco, would seem to be the last suspect in a murder for hire plot. But while the city’s police department was engulfed in Tenderloin graft, it also knew how to solve complex crimes. And Adachi details the meticulous path that led to Egan’s murder trial.

Hallinan to the Rescue

Egan was represented by a young attorney named Vincent Hallinan. Hallinan’s woman friend and later wife was Vivian Moore. This was 1932, years before Vincent and Vivian Hallinan became nationally known progressive activists who would give birth to a later San Francisco District Attorney—Terrence Hallinan—and an elite criminal defense attorney in Patrick Hallinan.

Hallinan used every trick in the book and made up new ones in representing Frank Egan. Events occurred in this trial that I have never read about occurring in any trial before. My Tenderloin book highlights the remarkable criminal defense strategies of Jake Ehrlich in representing those charged with graft and prostitution; Hallinan’s work how 1930’s San Francisco was blessed with criminal defense talent.

I rooted against Hallinan and his client throughout the trial. I think most readers will also favor conviction. Hughes entrusted Egan with nearly all her assets. She was not the only woman whose business relationship with Egan cost them dearly, and Adachi describes other suspicious cases (Egan was allowed to combine being Public Defender with running a private trust and estates practice. This connected him to people making wills).

Jeff Adachi was a savvy litigator. And the brilliance of this book is that he frames the facts so that the trial outcome is in doubt until the jury announces its verdict. Hallinan alone injects enough doubt into a seemingly airtight case to sustain the book’s suspense. Hallinan’s powerful closing argument—outside his troubling anti-Semitic attacks on the Jewish prosecutor which I hope he later regretted making—showed him to be a future legal star.

Adachi’s book is a must read for San Francisco history buffs. They will love the book’s details. One of the suspects along with Egan was arrested at the National Hotel on Market Street, which the organization I head currently operates. A suspect is interrogated for five days at the Whitcomb Hotel. The jury has dinner and holds a party at the historic William Taylor Hotel, now the historic McAllister Tower owned by Adachi’s alma mater, Hastings Law School.

For me, the book’s only downside is that it reminded me that we lost Jeff Adachi years before his time. How much fun he would have had discussing the trial strategies in this book! We’ll have to have those discussions without him while remaining grateful that he brought the Frank Egan case back to life.