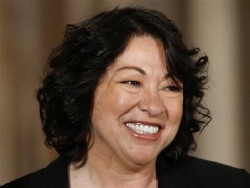 Remember all the heat Justice Sonia Sotomayor took over her “wise Latina” comment? Events this past week surrounding the discovery of kidnap victim Jaycee Dugard have proven the essence of her statement. The Dugard case was cracked by two female Berkeley police officers – one black, one white – at least one of whom is also a mom. What does that have to do with the country’s first Latina Supreme Court Justice? It proves the Justice’s point that we all bring our personal life stories to our work, and that the life experiences of women, of minorities, of parents, can and do affect how well public servants perform.

The shocking case of a young woman held captive for 18 years in a suburban neighborhood came to light because of the sharp instincts of UC Berkeley police officers Ally Jacobs and Lisa Campbell. The two women spotted convicted rapist Phillip Garrido handing out pamphlets on the Berkeley campus with two young girls. Something about the situation – particularly the young girl’s stilted answers to routine questions – caused Jacobs and Campbell to worry, and they called Garrido’s parole officer. The arrest that has captivated the mainstream media from coast to coast followed.

Jacobs was quoted in UC Berkeley’s student newspaper as saying that “police intuition” merged with “mother’s intuition. … I started thinking like a concerned mom.” (Information about Campbell’s parenting status has not been part of the story.) She told CNN that while her “police intuition was kicking in, but I would say it’s more of a mother’s intuition. . . . And just being the protective mom that I am, my reaction was to try and do what I could to help them.”

Was Jacob’s saying that she wouldn’t have cracked the case if she weren’t a mom? If she were a male?

But Jacobs’ hunch echos the one line of Justice Sotomayor’s stellar written and spoken record that was grist for the right-wing media mill: “I would hope,” Sotomayor said during a speech on the UC Berkeley campus in 2001, “that a wise Latina woman with the richness of her experiences would more often than not reach a better conclusion than a white male who hasn’t lived that life.” After several others in law enforcement let Garrido slip through their fingers, the richness of Jacobs’ and Campbell’s experience saved the life of a young woman and her two young daughters.

In her 2001 Berkeley speech, Sotomayor said that “Our gender and national origins may and will make a difference in our judging.” In Berkeley in 2009, gender and mothering made a difference – a big difference – in policing. Yet in 2007, only 17 percent of the nation’s patrol officers, detectives, criminal investigators, and “first-line” police and detective supervisors were female.

Will the mainstream media or the right wing bloggers think about the Garrido heroes and apologize for giving our newest Supreme Court Justice a hard time? Will they be pointing to Ally Jacobs and Lisa Campbell to advocate for more diversity in the criminal justice system?

Lainey Feingold is a civil rights attorney (and mother.)