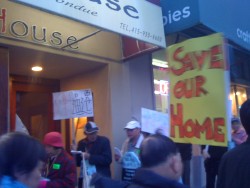 A group of Chinese seniors and their allies held a lively picket last night in front of the Shabu House restaurant at Geary and 16th Avenue, owned by the landlords of Jasper Place. San Franciscans, they said, should not patronized restaurants owned by real estate speculators who are using the Ellis Act to evict low-income seniors. The Jasper Place tenants have been fighting their eviction for months, while the landlords are already marketing the not-yet-evicted units as TIC’s with “potential to add parking” (perhaps converting some of the apartment space into garages.) Supervisors Eric Mar and David Chiu attended the rally, the latter of whom has sponsored legislation to restrict such garages. But the real drama came after the Supervisors left – and the restaurant owner called the cops. Although the picketers were marching on a public sidewalk, police tried to tell the organizers they were blocking access for pedestrians. The only time that was arguably true, however, was when four cops stood right between the picketers – effectively blocking the sidewalk themselves.