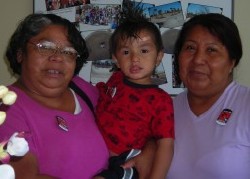 On May 26, a delegation of several janitors who were laid off from their jobs at Cisco Systems’ corporate headquarters met with San Jose City Council members to share their stories and appeal for the elected officials to reach out to Cisco decision makers on their behalf. More than 75 vulnerable, low-wage janitors – more than 40% of the total workforce – were laid off by Cisco’s contractor ABM in February, despite the tech company’s enormous profitability and more than $34 billion in cash assets. Since then, the janitors and hundreds of Silicon Valley community supporters have launched a series of escalating mobilizations to urge the corporation to be a responsible corporate citizen and put the janitors back to work.

“Today we met with City Council members’ staff to talk about what we are facing as laid off workers at Cisco and ask them to support us by reaching out to the CEO and to the Cisco Board,” said Guadalupe Antolin, a janitor who worked at Cisco for 3 years before being laid off in February. “They were moved by our stories and sympathetic to our situation, and so we are hopeful that with the support of the City Council that we can soon return to work.” Since being laid off, Guadalupe has lost her health care and is now struggling to pay more than $150 per month to get health coverage through COBRA. She is the mother of two children, and is worried about what could happen to them if she was to get sick.

The janitors and their community supporters have vowed to continue to their actions to appeal to Cisco to put the wellbeing of hardworking service workers ahead of corporate profits.