Jamie Oliver, You Should Be Ashamed of Yourself! 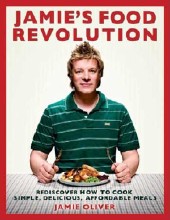 The current season of Jamie Oliver’s Food Revolution, already suffering from poor ratings and criticism from viewers that the show is manipulative and gimmicky, hit a new low when the June 10th episode ended with Jamie announcing “Ramon Cortines, you should be ashamed of yourself!”

Ramon Cortines, the former LAUSD superintendent, is being portrayed in season two of Food Revolution as a cross between the Grinch and Scrooge, because he refused to let Oliver’s film crew have the unfettered access they sought to film in LAUSD schools and cafeterias.

The school district informed Oliver last October that LAUSD was not interested in being involved in the project, which a publicity director for ABC said at the time was “still in the creative stages.” Rather than working in a neighboring district which might have been more welcoming, or focusing on the many other areas apart from schools where the American diet needs improvement, Oliver instead made his pouting about being shut out of the LAUSD a centerpiece of his show.

Mr. Cortines was also superintendent here in San Francisco for many years, back when my first child was starting school. People who worked with him then still remember his tenure as a kind of golden era. One of my children’s teachers once scornfully mentioned that Cortines’ successor in San Francisco, Bill Rojas, never returned phone calls. She explained that when Cortines was superintendent, if a teacher called him during the day (this was early 1990s, before e-mail) she always got a call back before end of the day – a personal call, not the supe’s secretary. This personal touch was something for which Mr. Cortines was noted, as well as his unfailing respect for teachers, a group currently held in only slightly higher esteem than terrorists.

Apparently Cortines’ popularity has continued in Los Angeles, as the Board of Education is on June 14th voting on a resolution commending him for his service and naming a high school after him. The resolution includes gems like this:

Ramon C. Cortines, Superintendent-Emeritus of the Los Angeles Unified School District (LAUSD), is the best Superintendent in the United States.

Ramon C. Cortines’ professional decisions are guided always by his deep understanding of the needs of students, by his belief system that every student can succeed, and by his inviolable personal integrity.

Ramon C. Cortines possesses extraordinary personal and professional skills, he is tireless, fearless, and without pretense, his work ethic and attention to detail are legendary and he is fully engaged in every aspect of the work of the District.

and my personal favorite:

Ramon C. Cortines once said, “I could spend all my time dreaming up programs, writing edicts. But I think in bureaucratic systems, the first thing you need to do is make individuals feel they are valued.” He achieved that goal, making students, parents, cafeteria workers, bus drivers, teachers, administrators, and all other members of the District’s staff feel that their contributions are visible, indispensable, and appreciated.

Now think about how Jamie Oliver approached school staff in Huntington last season, bashing the lunch ladies and the district nutrition director for things completely beyond their control, and how he approached the LAUSD (refusing to enroll his own kids in their schools, but coming in as an outsider and demanding unlimited access – with cameras rolling – to do whatever he wanted to do inside their schools. The whole idea that Oliver ever made anyone in any way associated with schools feel “valued” is a joke. He is only there to bash and blame, yet the schools themselves have very little say over how the federally-administered school meal programs operate.

As I have said before, if Oliver has an issue with how school meals operate in this country (and many of us DO have an issue with that, and have been working on it for years, long before JO arrived here to show us rubes how it should be done), let him take it up with the USDA, which oversees the federal school meals program and its Byzantine set of rules, and Congress, who are responsible for the criminally low funding provided to schools to feed our nation’s poorest and most vulnerable young citizens.

To publicly attack and belittle a lifelong educator, a man who twice came out of retirement to help ailing school districts, and whose career serves as the very definition of “public service”, just because that man had the courage to try to shield his school district from exactly the kind of staged melodrama and manipulation which viewers have pinpointed as the weakest aspect of the show, is unconscionable. Jamie Oliver, you should be ashamed of yourself!

Dana Woldow has been a school food reformer since 2002. She shares what she has learned at www.PEACHSF.org.