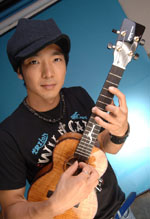 Vacationing in Kauai this week has afforded me the opportunity to catch up on reading, spending time with family, friends and listening to music; music I might not ordinarily be exposed to. Enjoying an after dinner Mai tai with my sister-in-law Diane, I mentioned that one of my favorite musicians, Futureman of Bela Fleck and the Flecktones, had just finished a tour with Hawaii’s most famous uke player. “Jake Shimabukuro?”, she asked. “Why yes!” I said, “Do you know him?” Diane revealed that Shimabukuro had once performed for her young cancer patients at Capiolani Childrens Hospital in Honolulu. “He was amazing and his music was beautiful. Plus he was really, really fast.” I first heard Shimabukuro on the Flecktones’ 2003 album, “Little Worlds”. His recent video performances on MySpace during Futureman’s Black Mozart Ensemble’s tour, will convince anyone who sees it, that Shimabukuro is indeed one of the most gifted talents to emerge from these sacred islands.

Though many still have trouble pronouncing his last name and the instrument he plays, Jake Shimabukuro (she-ma-BOO- koo-row) is becoming recognized as one of the world’s top ukulele (oo-koo-LAY-lay) musicians. Renowned for lightning-fast fingers and revolutionary playing techniques, Shimabukuro views the ukulele as an “untapped source of music with unlimited potential.” His virtuosity defies label or category. Playing jazz, blues, funk, classical, bluegrass, folk, flamenco, and rock, Jake’s mission is to show everyone that the ukulele is capable of so much more than only the traditional Hawaiian music many associate it.

At just four years of age, Shimabukuro’s mother gave him his first lesson. “When I played my first chord I was hooked,” says Shimabukuro, “I fell in love with the instrument.” That love grew into a deep passion to create and innovate. Experimenting with various guitar effect pedals allows Shimabukuro to create sounds never thought possible on the tiny four-string, two-octave instrument. A true showman, his performance captivates audiences with intricate strumming and plucking, electrifying, high-energy grooves and smooth, melodic ballads evoking heartfelt emotion.

Evolving from the heavily amplified riffs that earned Shimabukuro the reputation as “Jimi Hendrix of the ukulele.” Shimabukuro masterfully extracts the pure “clean” natural acoustic sound of the uke, delicately making a single note smile or cry on his new solo album Gently Weeps. “Recently, I’ve been touring a lot as a solo artist,” says Shimabukuro, “and it was suggested to me that I record an album to directly reflect my live ‘bandless’ set. The songs I chose for this project are tunes I frequently perform at my shows. There are a couple of new ones, but these are mainly songs that I’ve been playing for a while.”

The highlight of the album is Shimabukuro’s cover of George Harrison’s “While My Guitar Gently Weeps.” Last year, a video clip of Shimabukuro playing this song in Central Park started circulating the internet resulting in emails of support and amazement from across the globe; France, England, Germany, Sweden, and also Australia and Korea where Jake recently signed distribution deals. To date, the video has been viewed over 1.5 million times. Shimabukuro had the honor of meeting Harrison’s widow, Olivia, backstage at his show with the Honolulu Symphony this past November. Afterwards, she described feeling George’s presence with her when Shimabukuro played his rendition of George’s Gently Weeps.

From a modest beginning performing at a local Honolulu café, Shimabukuro has gone on to play famous venues such as the House of Blues and The Knitting Factory (Los Angeles), The Birchmere (Alexandria, VA), Tipitina’s (New Orleans), Joe’s Pub and B.B. King’s Nightclub (NYC), The Bumbershoot Festival (Seattle), The Fuji Rock Festival (Japan) and many others. Touring with Jimmy Buffett in 2005, 2006 and 2007 gave Shimabukuro the experience of a lifetime, regularly exposing his virtuosity and amazing stage presence to crowds of over 50,000. Shimabukuro’s first national television performance came in December 2005 on NBC’s The Late Show with Conan O’Brien. In June 2002, Shimabukuro became the first ukulele player from Hawaii to sign with Epic Records International/Sony Music International. Three years later, he obtained a U.S. distribution deal for his Hitchhike Records label.

His selection as the spokesman three years in a row for Hawaii Tourism Japan’s (HTJ) aggressive campaign to market Hawaii to Japan, as well as his frequent tours of the island nation, have also made Shimabukuro a household name in Japan. “Rainbow,” a track from Walking Down Rainhill, was selected as HTJ’s theme song as well as the official Honolulu Marathon theme song in 2004. In 2006, Gently Weeps track “Beyond the Break” was selected as the Marathon’s theme song and was played as Shimabukuro crossed the finish line upon completion of his first marathon run.

Shimabukuro’s musical accomplishments are well known throughout the Hawaiian Islands and Japan, though he is perhaps known equally as well for his outgoing personality and warm heart. In his spare time Shimabukuro often visits schools to talk with and play music for the children of Hawaii, hopefully inspiring thousands to put their energy into learning about and playing music.

The State of Hawaii recognized Shimabukuro as an outstanding musician and role model for the people of Hawaii. In 2004 Shimabukuro was named Hawaii’s goodwill ambassador to Japan and received “The Japanese Foreign Minister’s Commendation” for being an active voice in U.S.-Japan relations at the grassroots level. In a ceremony held on September 4, 2006 Jake Shimabukuro was appointed as the 160th Okinawa-Uchina Ambassador at the Okinawan State House.

Shimabukuro toured with Bela Fleck & the Flecktones (2002, 2005, 2006) and recorded on the band’s aforementioned Little Worlds album. Shimabukuro is also featured on Ziggy Marley’s Grammy Award winning Love is My Religion (2006) and contributed to the soundtrack of the Jimmy Buffett-produced film, Hoot. This was a priceless experience for Shimabukuro and gave him the confidence to score the recently released Japanese independent film HULA GIRL. Two songs from the film score, “Wish on My Star” and “Hula Girl” are bonus tracks on Gently Weeps.

Energy, imagination, and innovation have been Shimabukuro’s keys to success. He plans to continue recording, performing, collaborating, and staying happy. “I love what I do. I’m forever thankful for music.”

Shimabukuro won’t be in the Bay Area until November, when he performs at the Palace of Fine Arts during the SF Jazz Festival. Until then, Mahalo Jake Shimabukuro.

E. “Doc” Smith is a musician and recording engineer who has worked with the likes of Brian Eno, Madonna, Warren Zevon, Mickey Hart, Jimmy Cliff, and John Mayall among others. He is also the inventor of the musical instrument, the Drummstick”, and can be reached at myspace.com/edoctorsmith