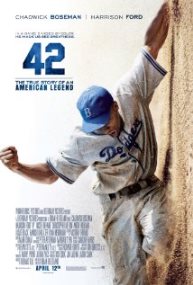 I have been talking to baseball fans about the new film on Jackie Robinson, “42,” and have been surprised that many have not seen it. This movie is a smashing success both for people knowledgeable about Robinson and those who know little beyond his role in breaking baseball’s color line. If you are a SF Giants fan reluctant to see a film promoting the Dodgers, consider that among the heroes in “42” is Leo Durocher, who played a pivotal role mentoring Willie Mays when the Giants legend joined the New York Giants in 1951. And if your interest is less baseball than history or civil rights, rarely has a big-screen film better captured what it meant to be African American in the United States prior to 1965 (we now need a film about Roberto Clemente to show the racism faced by Latino baseball players of the pre 1965 era). I have yet to speak to anyone who did not love this film, and it is better enjoyed in theaters than on a DVD.

Fictionalized movies about historical figures are hard to get right, but “42” does this for Jackie Robinson and the baseball world of his time. I saw the prior movie bio starring Robinson, read all the leading books about him, met him on the street in Los Angeles in 1972 (just before his death), and think the world of Rachel Robinson, herself one of the great Americans of our time—this film gets as close to real world reality as one can expect from a non-documentary.

“42”is enjoyable on many levels, but I most appreciated its reminding today’s Americans about which side various players were on concerning Robinson and racial justice. I wrote earlier this year that Stan Musial’s silence while his teammates spiked and racially taunted Robinson made him no hero, and the film shows why any public act on Robinson’s behalf made such a difference.

Baseball fans know going into the film about Pee Wee Reese’s courageous support of Robinson, but seeing it on the screen made me even happier that the Dodgers longtime shortstop was elected to the Hall of Fame. And while Ralph Branca will always be best known for giving up Bobby Thompson’s 1951 pennant winning homerun, his support for Jackie Robinson now will also not be forgotten.

I do not want to give away plot points, but the racist villains of Robinson’s first year also get their unfortunate legacies revived. The film portrays Dixie Walker and other racist players and managers exactly as they deserve, without sugarcoating their legacies.

I recognize that the film gives too much credit to Dodgers owner Branch Rickey, implying that his sole act of courage—rather than a grassroots movement—led to Robinson’s signing. It also portrays legendary Pittsburgh Courier sportswriter Wendell Smith as merely Rickey’s chosen travelling companion for Robinson rather than, along with Lester Rodney of The Daily Worker, one of the leading journalist advocates for opening baseball to African-Americans. Smith even recommended Robinson to Rickey.

But the more important point is that the film highlights the courageous legacies of Rickey, Smith and others promoting racial justice at a dangerous time. And it powerfully demonstrates the historic courage of Jack Roosevelt Robinson, who sacrificed psychologically, emotionally and financially for opening baseball’s door.

The impact of baseball teams holding spring training in Jim Crow Florida is ignored in most baseball history books, but is a critical part of “42.” This issue deserves its own film, as it reflects baseball’s profound insensitivity to African American and Latino players in the nearly two decades after Robinson broke the color barrier.

The film also makes viewers aware that in addition to being the only African American player in 1947, Robinson was among the very few to attend college (he left UCLA just short of graduation). Baseball was dominated by southern farm boys, which from the very start created a major cultural and educational chasm with Robinson in addition to race.

Go see “42”on a theater’s big screen where its power is best captured. The scenes in Ebbets Field are alone worth the price of admission.