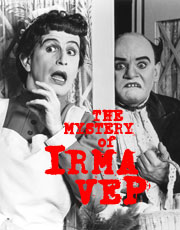 Jane Eyre, Rebecca, Gaslight, Dracula, Werewolf, Hound of the Baskervilles and The Mummy. Take bits and pieces of all these gothic myths and you get The Mystery of Irma Vep. It’s a spoof of course. However, the key to it’s success is whether the cast makes it seem like they are having a lot of fun with it – or are they trying too hard to make it seem funny. It can’t be the actors – they are terrific and they turn in masterful performances as various characters ranging from a housemaid, to the mistress of the house, to a werewolf, the master of the house and the ex mistress of the house. One of them even plays an Egyptian guide, and an exotic mummy that is brought back to life with a secret formula. So why isn’t it working? Well, the Director comes to mind.

The mystery of Irma Vep was written by Charles Ludlam in the 80’s. It starts like all old-time gothic dramas do – with “It was a dark and stormy night”. In the play the actors dress as women, men and other characters. The costume changes are lighting quick as the remaining actor passes time on the stage dusting furniture or pacing to the sounds of lighting to give time for the other actor to change from butler to werewolf.

The story takes place at an old mansion called Mandacrest. The name is of course taken from the mansion where Rebecca lived (Mandalay). The first Lady Vep has died, or so we are led to believe, and her husband recently married an ex-actress/diva played wonderfully by Arnie Burton. Her Husband, Lord Edgar – is a pompous “Hamlet: – quoting stiff upper lip kind of guy, played by Erik Steele, who also plays An intruder, the maid Jane Twisden. The first act is mildly amusing. Something was off, something was not clicking – I fought to stay awake. In the second act the play moves the action to Egypt – and some life was pumped into the mummy’s tomb in more ways than one.

This is my third time to see “Vep” – the first two times I was worn out by laughter. This time I was just worn out. Sure, there are a few moments that are kind of giggly, but not many out loud laugh stuff. Even the little sex bits that have been added – like the butler who becomes a werewolf taking a big doll that looks like Lady Enid and humping her face was not that funny. You know – it was sort of “seen that – done that”.

Production values were great, the lighting superb – but the fun was missing. Sorry. I’m giving this show a Rating of TWO GLASSES OF CHAMPAGNE. At The Berkeley Rep Thrust Stage.