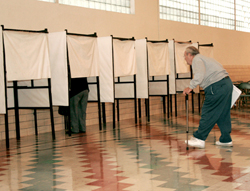 Today is Election Day in a number of states, and low voter turnouts are projected. While political insiders are ready to pounce on the meaning of the Pennsylvania, Arkansas, and Kentucky Senate primaries, many registered voters have concluded that these contests are much ado about very little. After all, voters went to the polls in droves in 2008 to bring “Change,” yet unemployment exceeds 10% and two of the priority issues for many voters — climate change and comprehensive immigration reform — remain unaddressed. Yet the problem in this case is less a failure of national political leadership, and more a problem of voters assuming that casting a ballot alone is sufficient (or even the best way) to make a difference. Progressives should be less concerned about low voter turnout in primaries than over the disappearance of activists from grassroots campaigns in between elections.

Readers of this and other political sites are often mystified by the general public’s lack of interest in the Lincoln-Halter race in Arkansas, the Specter-Sestak contest in Pennsylvania, or the many other federal and state primaries in the next few weeks. But it’s actually perfectly understandable.

After the 2008 election cycle, whose presidential primary season began early in 2007 and continued for nearly two years, American voters were worn out. They went to the polls in record numbers to elect a presidential candidate running on a platform of “Change,” and having put him and his Democratic Party allies in power, felt they had earned the right to sit back and enjoy the fruits of the victory.

Well, despite the media’s year-round obsession with elections, politics does not work that way.

Voters can achieve some results from electing their chosen candidate, but those seeking progressive change — which typically involves passing legislation opposed by corporate and big-money interests — should recognize that putting the right people in office is only the beginning. The hard work comes next, and at the federal level under a system structured to prevent progressive change, it can prove a long struggle.

For many readers, this point is obvious. But talk to the less politically oriented citizenry and you will hear that they thought Obama would enact change without further work on their part.

This attitude should not be surprising. The traditional media promotes the notion that change should come from elections rather than ongoing activism, as it seeks to channel all democratic participation through the exclusive vehicle of voting.

So many believe that it is politicians’ job to get things done, and that voters do their part by getting them elected. After becoming vested in the “Change” election of 2008 and seeing no dramatic improvement in their lives since Obama took office, many see no point in casting ballots in 2010 state primaries.

The best way to increase turnout in non-presidential elections is to connect voters to issue campaigns in between elections. Those who experience the legislative process firsthand are more likely to recognize the importance of electing politicians who share their views, and of the need to maintain ongoing grassroots pressure.

This is what is known as “organizing.” And it is the lack of such organizing that will hinder voter turnout this primary season, and could possibly cause major progressive losses in November due to weak turnout.

The Obama Administration appears to understand this dynamic, which is why it is pushing hard on a broad range of issues in hopes of engaging more people prior to November. But for all the fundraising success of MoveOn and Democracy for America and the hard work of the DNC’s Organizing for America , the ongoing progressive organizing infrastructure is woefully underfunded.

It’s long been easier to raise money for ongoing organizing with Republicans in the White House, as donors recognize that grassroots activism is the chief bulwark against right-wing measures. But when Democrats hold the presidency or governorship, the feeling is that the pressure is off and that organizing dollars can go elsewhere.

It may be that there has been far more grassroots organizing around national issues than has occurred with a Democrat in the White House since the 1930’s. But voter expectations were so high for Obama that the organizing resources needed to reach historic levels in order to avoid the widespread political disengagement that has since occurred.

So as those of us who pay attention to primary elections parse out the meanings of tonight’s outcomes, keep in mind that none of these results will affect whether major national progressive legislation gets enacted this year. That requires pressuring politicians between elections.