by Caroline Grannan and Dana Woldow on February 4, 2009 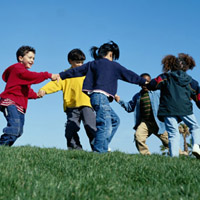 Only recently, ’twas the season for endless viewings of the film classic “It’s a Wonderful Life,” in which the angel Clarence intercepts a suicide attempt by Jimmy Stewart’s character, the ruined George Bailey, and shows him what a lost and sad place the town of Bedford Falls would have been without him.

This month we present “It’s a Wonderful Children’s Fund,” in response to concerns that San Francisco may try to fix its budget woes by aiming at the 3 percent of property tax revenue that is set aside for children’s services. Mayor Newsom’s recent firing of Margaret Brodkin, the dedicated children’s advocate who was the city’s head of youth and family programs, gives credibility to those fears.

The Children’s Fund was established in 1991, after a series of budget crises meant cuts that fell disproportionately on the city’s smallest, neediest and most vulnerable residents.

In desperation, other children’s advocates asked the voters to set aside a small percent of the property tax revenue for very specific children’s services, and also to require that children’s services receive cuts or increases only proportionate to changes in city general fund revenue. Thus this set-aside allows funding to decrease when revenue drops.

This Children’s Fund is more accountable, with more community input, than any other city funding. Its planning, review, sunshine and evaluation requirements are unmatched. The $46 million Children’s Fund accounts for 1.5 percent of the city’s $3 billion general fund, while children constitute 15 percent of our city’s population.

In today’s screening of “It’s a Wonderful Children’s Fund,” let’s peek at our city without the fund. We see more than 40,000 students each year going without city-funded after-school programs, without childcare centers, without health centers, without tutoring programs. In our film, we see impoverished children going without free lunch in the summer, when school cafeterias are closed. We see young people in the juvenile justice system losing their career training and jobs, and a city with far fewer services for children with disabilities. There are no Wellness Centers in the high schools, no programs for LGBTQ youth, no alternatives to incarceration, no educational enrichment.

In the real “It’s a Wonderful Life,” the seedy, broken town without George Bailey has been renamed Pottersville, after the predatory slumlord Mr. Potter. The landscape in San Francisco for children’s services before 1991, like Pottersville, was a cold and alien place. Our movie’s version of Pottersville is also devoid of enrichments like the recent annual Family Appreciation Day, in which over 30,000 people flocked free of charge to 32 museums and attractions – an innovative program sponsored by the Children’s Fund.

The movie of our city without the Children’s Fund gets terrible reviews from voters, who gave 75 percent approval to renewing the fund in 2000. Voters give a thumbs-up to protecting children from being victimized by budget crises.

The Children’s Fund is managed by the leanest, most efficient and most squeaky-clean department in city government – the Department of Children, Youth and Their Families (DCYF), whose 35 staffers manage 400 grants, 27 initiatives and dozens of community events, under accountability rules so rigorous that they are recognized as a national model.

And there are no more cost-effective programs than those serving our children. Childcare workers make an average of $25,000 year, compared to an average $91,400 for the city’s 28,000 employees. Clearly, care for the youngest San Franciscans is not where the disproportionate strain is put on the budget.

Children are an easy target, but we are not a city of Mr. Potters. And it’s in our interest to provide a safety net and support for our youth. As George Bailey asked Mr. Potter about helping the poor to help themselves: “Doesn’t it make them better citizens?”

Caroline Grannan and Dana Woldow have been parents in San Francisco since before the Children’s Fund was established. They are both volunteer advocates for children, schools and community issues. Between them they have raised five children and have a combined total of 41 years as San Francisco parents.