Is There a “Contraband Economy” in School Cafeterias? 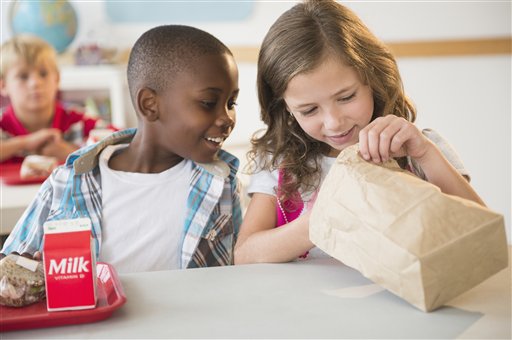 Although you would never know it from the inaction in Congress, it’s time to renew child nutrition legislation, including the rules for food sold and served in schools. As recently as 2010’s Healthy Hunger Free Kids Act, Congress still made a bipartisan effort to do what is best for kids’ health, but now sadly things have changed. Some voices are calling for serving students less whole grains, less fruits and vegetables, and more sodium.

Of all the anecdotes used in lieu of evidence by those trying to gut healthy school lunch rules, the silliest may be The Tale of the Contraband Salt. In this fantasy, school cafeterias from coast to coast are hosting a veritable black market of enterprising students smuggling in salt shakers in their backpacks to add additional sodium to their meals, and to those of their paying friends.

This alleged “contraband economy” was first suggested to Congress by John Payne, school board president of a 5-school district in Indiana. On June 24th, he told a subcommittee hearing of the House Committee on Education and the Workforce that healthier school meals had unintended consequences:

“Perhaps the most colorful example in my district is that students have been caught bringing – and even selling – salt, pepper and sugar in school to add taste to perceived bland and tasteless cafeteria food. This ‘contraband’ economy is just one example of many that reinforce the call for flexibility.”

Payne’s remarks were subsequently reported in an article in the Indianapolis Star. Note that Payne did not say how many students might be involved, nor that he had observed kids bringing in or selling “contraband” condiments himself; he merely reported it as hearsay.

But before you could say “When it rains, it pours,” conservative media outlets were all over the story.

The Washington Star Beacon, a publication some characterize as “decadent and unethical,” blared the headline “Kids Create Salt Black Markets in Cafeterias Due to Michelle Obama’s Lunch Rules.” Almost immediately, the Hit and Run blog on Reason.com (“Free Minds and Free Markets”) repeated the Star Beacon’s version of the story, adding their own anti-Obama embellishments.

Barely 24 hours later, the Liberty Blitzkrieg blog (the name tells you everything you need to know) posted its own version of Reason’s version of the Star Beacon’s story – and that’s how it goes in the conservative echo chamber.

These folks worked themselves up into such a frenzy that one wonders which part of the Bill of Rights they believe guarantees the Right to Bear Salt Shakers.

After a few months of blessed silence about the fictional epidemic of salt-sneaking students, the tale is now back in the news.

Earlier this month, the Government Accountability Office (GAO) issued a report entitled “School Nutrition: USDA Has Efforts Underway to Help Address Ongoing Challenges Implementing Changes in Nutrition Standards.” The report, requested by Rep. John Kline, chair of the House Committee on Education and the Workforce, was researched and written between November 2014 and August 2015. Its purpose, I was told by USGAO’s Director for Education, Workforce, and Income Security Kay E. Brown, was to examine “the implementation of school lunch, breakfast, and competitive food nutritional requirements at the local level.”

This is the third report the GAO has issued since the changes to school meals required by the Healthy Hunger Free Kids Act began taking effect in 2012. As the new report explains:

“To gather information on challenges directly from those affected by the changes to food in schools, we contacted the eight school districts in eight states across the country that we had visited as part of our prior study of implementation of the new school lunch requirements in school year 2012-2013. From December 2014 through March 2015, we visited seven of the districts and gathered information from the eighth district through phone interviews. The school districts selected for these visits provide variation across geographic location, district size, and certain characteristics of the student population and district food services.”

In a section called “SFAs and States Are Concerned about Meeting Future Sodium Targets Without Industry Help,” the report explains that the 2014-15 school year marked the first year that SFA’s (bureaucratese for “school districts”) were required to comply with sodium reduction targets that are being phased in over the coming decade.

One report of students with salt shakers

Of the eight districts the GAO examined, “We found that students in two of the SFAs had attempted ways to add sodium to their school meals, including bringing salt and pepper shakers to lunch in the cafeteria and asking school faculty and administrators to obtain additional condiment packets for them from the cafeteria. The dietitian in the latter SFA noted that under the current sodium restrictions, the SFA no longer allows students to take unlimited quantities of condiments.”

In other words, it was reported in one of the eight school districts that an unspecified number of students had brought salt shakers to school. At the second school district, students asked adults to provide them with more salt, but there was no report that those students brought in their own. Kay Brown at the GAO confirmed to me that this is correct.

And yet, no sooner did the report come out than an article in the Christian Science Monitor erroneously trumpeted that the GAO report “found that many students are simply bypassing the new dictums by sneaking salt and pepper shakers onto campus,” when in fact the report said no such thing.

With over 30 million students eating school lunch daily, is a report that found some kids in one school district who brought their own salt really evidence of widespread salt-sneaking in America’s school cafeterias?

GAO reports usually make recommendations, but this one didn’t. I asked Kay Brown why that was, and she explained, “Typically, we make recommendations to federal agencies when we see problems that are related to program requirements, and we see gaps in the agencies’ response. This was true with the prior reports. In the case of this report, we found that USDA was taking action to try to address the issues we identified.”

What that means is, the GAO was asked by the chair of the House Committee on Education and the Workforce to look into whether the USDA was doing a good job helping local school districts implement the healthy school meal rules; this report discovered that the USDA was already taking action on all the issues it found, so they made no further recommendations.

That includes not recommending that USDA throw in the towel on sodium reduction just because a few kids want more salt.

Rather, the GAO report cited USDA efforts like the “What’s Shaking” initiative to help cafeterias boost flavor and maximize taste without a lot of salt, and “Team Up for School Nutrition Success,” to provide technical assistance and peer-to-peer mentoring for school districts that need help meeting school food rules.

No evidence of widespread black market for salt

That’s not really surprising, because it is pretty clear that despite what some healthy school meal foes claim, there is no widespread black market for salt in schools. I asked some of the school food service directors I know if they had ever seen or heard of a student in their own district bringing a salt shaker to school, and not one ever had.

In the course of her work, Dayle Hayes, MS, RD, of School Meals That Rock, visits about 50 school cafeterias a year, nationwide. She told me, “I have never seen the salt shaker scenario. Honestly, I sincerely doubt there is any real black market in salt shakers in schools.”

So why do we keep hearing these tall tales of a “contraband economy” in the cafeteria?

Margo Wootan, Director of Nutrition Policy for the Center for Science in the Public Interest, explains:

” In the early days of state and local policies to get soda and candy out schools, some argued that the policies would be worthless because kids would just sell black market junk food to their peers. But studies show that school food policies have resulted in healthier eating by kids. The same is true of reducing salt in school meals. An occasional kid with a salt shaker makes for a clever news story, but it’s the rare exception, not the norm. The overwhelming majority of kids are now getting school meals and snacks with less salt, which will reduce their chances of heart disease and stroke in the future, and help to retrain their palates toward less salty food.”

Even though a few kids may well want more salt on their school meals (and 90% of kids already eat too much salt, according to the Centers for Disease Control and Prevention), that’s no reason to up the sodium content for the more than 30 million kids a day who eat school lunch. That wouldn’t benefit anyone but the processed food companies that produce so much of what kids eat at school.

I asked food policy expert and NYU Professor Marion Nestle what she thought of the tales of a “contraband economy” in school cafeterias. Her response:

“This reminds me of the video of the kids clutching their stomachs in hunger. Oh please. Where are the adults while all this is going on? Obviously, the people who believe that government shouldn’t be in the business of setting nutritional standards for schools just love this sort of thing. But government does have an interest in keeping kids healthy and that should be the foremost concern.”

Indeed it should be. Let’s hope that in renewing child nutrition rules, Congress takes the “contraband economy” with a grain of salt.