Is The Tenderloin Turning a Corner? 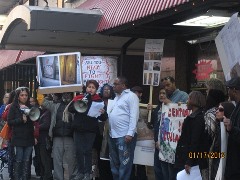 It seems that every time a new bar or restaurant opens in the Tenderloin an article appears claiming the neighborhood is “changing.” Many look to the major new investments in Mid-Market to support this belief, though its connection to Tenderloin revitalization has yet to be felt. For all of its considerable progress in 2013, the Tenderloin still suffers from public drug dealing, a perceived lack of safety, and the absence of quality businesses like cafes and grocery stores that other communities take for granted.

As I have written many times, San Francisco’s Tenderloin neighborhood has proved remarkably resistant to the economic good times impacting other parts of the city. Neither the city’s economic resurgence in the 1980’s, nor the dot-com boom of the 1990’s, nor the housing bubble that followed led to the Tenderloin’s revival. Now many hope that its proximity to a revitalized Mid-Market will spell the difference, and it certainly will help.

But my optimism is based on other factors: the Tenderloin finally has the combination of resident leadership, concerned owners, and a committed mayor that it has long lacked

Let’s begin by reviewing progress in 2013. I will limit this to the lower Tenderloin, as the many positive new businesses on Geary and issues limiting the greater success of Little Saigon require a separate story.

I wrote an article in July 24 2006 that connected the Tenderloin’s decline to the parallel decline of Golden Gate Avenue. I wrote that while Golden Gate from Larkin to Taylor had many successful businesses when I attended nearby Hastings Law School from 1979-1982, by 2006 its “problems had never been worse.”

I suggest reading that story because Golden Gate Avenue’s revival since 2006 has been dramatic. Hastings finally replaced its surface ground parking lot at Larkin (part of which was on a site that had two SRO’s and successful retail businesses until demolished by the school in 1989) with a parking garage and retail space that has greatly enhanced the area. Popular Philz Coffee anchors the corner, and the other retail spaces have increased positive foot traffic in the area.

At Golden Gate and Hyde, the long vacant KGO building at 277 Golden Gate finally reopened this summer as the Lofts at Seven. The problems in front of the vacant building are gone, and the new structure, whose café will soon open, is a tremendous community asset.

The other great news from 2013 is that the owners of the Post Office building at 101 Hyde at Golden Gate will demolish the structure and replace it with ground floor retail and seven floors of housing. Considering that 101 Hyde’s chief function has long been as protection for drug dealers outside, its demolition and rebuilding will be a huge step forward.

The renovation of the historic YMCA and the installation of the Tom Waddell Clinic were completed this year at Golden Gate and Leavenworth, and the St. Anthony’s new senior housing/new Dining Room began construction. And the long vacant 25 Taylor Street office building right off Golden Gate was entirely leased to WeWorks, a hub for innovation.

Heading north, lower Turk remains the Tenderloin’s—and San Francisco’s—most drug dealer infested block, a situation Chief Suhr refuses to address despite the Central City SRO Collaborative bringing him down to their office in July and showing him firsthand what was going on.

But Suhr’s response is less important than the fact that residents banded together to get 1500 signatures on a petition telling the Chief “Enough” and demanding he visit lower Turk. This would not have occurred in the troubled Tenderloin of the 1990’s and for several years after. Engaged residents bring neighborhood improvements, and the number of Tenderloin residents involved in their community grows each day.

Knowing it would be moving to a block with high resident involvement may have contributed to Counterpulse dance studio deciding to relocate to the long vacant Dollhouse site at 80 Turk. This brings one of the city’s up and coming cultural institutions to the Tenderloin, and will eliminate drug dealing in front of that site. Counterpulse has already demonstrated an interest in working with residents to improve the block, and will prove a great fit for the neighborhood.

Two development projects are set for the first block Turk, one on the Metropolis Hotel parking lot and the other the massive block sized 950 Market project. Construction will not begin on eeither project in 2014, but both are in the Planning Department’s process.

Barbary Coast Consulting moved into the Tenderloin at Turk and Mason in 2013, and got Mikkeller’s Bar to open up in the former Polo’s space at 34 Turk. Mikkellers’ success in that location shows prospective restaurant and bar owners that quality food attracts customers regardless of the surrounding area.

The 100 block of Turk also saw important progress. I worked with David Nale to resolve problems with Planning around his planned Bulldog Bathouse at 130 Turk, and by the summer the Tenderloin should have the city’s premier doggie day care facility. Neil Patel purchased the rundown youth hostel at 116 Turk and completely upgraded both the housing above and the long dormant commercial space below.

In perhaps the most dramatic news, longtime Tenderloin property owner Nevio Mosser has just acquired the Grand Apartments at Turk and Taylor. This is the future home of the Phantom Brewery along Taylor, and Mosser—who has played a leading role in battling neighborhood drug dealing– has big plans for the Turk Street side as well.

In some low-income neighborhoods, changes in ownership spell trouble. In the Tenderloin, virtually every change brings improvement. For over forty years the Tenderloin, like Mid-Market prior to 2011, has been saddled with owners refusing to invest in improving community safety or take extra steps to attract positive businesses; far too many owners have only cared about collecting rent.

The historic rezoning of the Tenderloin in the 1980’s could not have happened had owners and tenants not joined together. Now, over thirty years later, this alliance is being restored.

No San Francisco mayor spent as much time in the Tenderloin before taking office as Mayor Ed Lee (thanks to his fondness for Original Joe’s former Taylor Street location). I worked with Lee on hotel conversion issues in the Tenderloin in the early 1980’s, and as City Administrator he played a major role in building the identity of Little Saigon.

For Lee, Chief of Staff Steve Kawa, and the entire Mayor’s economic team, improving the quality of life in the Tenderloin is a front-burner issue. This commitment includes extensive outreach to Tenderloin small businesses as part of the Invest in Neighborhoods program and SF Shines, and prioritization of the neighborhood by the Department of Public Works. The Mayor also ensured that CPMC provide mitigations to the Tenderloin for its new hospital at Van Ness and Geary; this will result in roughly 135 new Tenderloin street and sidewalk lights, the completion of the two-way streets for Eddy and Ellis (a project whose future completion also owes much to D6 Supervisor Jane Kim), and a permanent “Safe Passage” route for Tenderloin kids.

By working together, residents, owners, and the city’s political leadership can finally make the Tenderloin what those of us who worked to save the community from displacement and demolition in the early 1980’s aspired it to be.