Is the SF Chronicle Trying to Kill Public Housing? 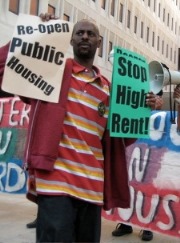 If you think the San Francisco Chronicle’s ongoing stories criticizing the SF Housing Authority are designed to help long-suffering public housing tenants, I have a bridge to sell you.

As the federal government continues to starve public housing authorities of the billions of dollars needed to improve and maintain their buildings, the San Francisco Chronicle and other media continue to miss the forest for the trees. Instead of rallying readers to demand that House Republicans provide funds necessary to preserve public housing, local media promotes penny ante local scandals that have nothing to do with the billions needed to maintain the nation’s largest housing resource for the poor.

The Chronicle stories are not pushing Congress to allocate needed funding for PHA tenants; to the contrary, many readers view the coverage as confirming that money spent on “corrupt” housing authorities will be wasted, with many concluding that the best solution is eliminating public housing altogether.

The most recent example that the Chronicle cares little about the longterm future for SF’s public housing tenants was Heather Knight’s April 12 story, “S.F. Housing Authority’s legal woes add up.” The news hook for the story was a $1500 discovery sanction against the SFHA for not providing information in private lawsuits brought against it.

Knight acknowledges that this “amount may sound like peanuts”—she got that right—but claims that “for an agency trying to climb back from the brink of financial collapse – and unable to quickly fix basic living conditions like broken elevators, leaking sewage and rampant mildew – we’d argue it may not be the best use of taxpayer money.”

If everything you knew about the SFHA came from the SF Chronicle, you’d likely believe that this “financial collapse” was entirely caused by poor management. As if great management can get elevators fixed without money to do so, or can the perform multi-million dollar upgrades that some of the projects require through effective administrative techniques.

Knight rarely reminds readers that public housing authorities across the nation are experiencing the same problems we are seeing in San Francisco, and that the problem impacting all is caused by Congress’ refusal to allocate the necessary funds. This is not a problem that the best of management can solve, and one reason so many housing authorities have poor management is that highly qualified administrators won’t take a job where they know they don’t have the resources to succeed.

“Most conspicuous by its absence was any criticism by Harris of HUD, which entirely funds public housing and by any informed source, actually underfunds it by billions. Since 2010, public housing agencies have lost a cumulative total of $3.4 billion in federal funding (ignoring losses due to inflation) to operate and maintain public housing developments, which provide affordable homes to 1.1 million low-income families. These developments now face a $26 billion backlog of repair needs. While (RHA Director) Tim Jones and his crew may have a number of shortcomings, any honest coverage of the problems in Richmond or anywhere else has to start with a lack of resources and unreasonable expectations (See http://www.cbpp.org/cms/?fa=view&id=3993).”

“Yet CIR never once cited HUD for inadequate funding or suggested any legislation or policy changes to address that issue. The entire focus was on the shortcomings of the Richmond Housing Authority and its staff. The closest Harris got was quoting Jones about the funding issue, but she failed to evaluate whether or not he had a valid point, a very important, even critical, piece of information, particularly with respect to public policy. “When I arrived, we had a staff of 65,” Jones said. “Now there’s a staff of about 28. We are lean here. There is no fat.”

The authority’s executive director, Tim Jones, said he’s “running an operation on life support.” He blamed years of budget cuts from the federal government for the problems plaguing the housing authority and insisted that the agency is on the road to recovery. He said the problems come down to money. “

As Butt accurately concludes, “The Center for Investigative Reporting must think they have done a great service by taking on Richmond’s public housing… What they also haven’t done is describe what is needed to fix it.”

There are remarkable parallels between the Chronicle’s coverage of the SFHA and CIR’s story on Richmond, and I strongly suggest reading Butt’s entire piece.

Shooting Fish in a Barrel

Reporting on bad housing conditions and management problems at the SFHA is like shooting fish in a barrel; newspapers could have filed these stories almost any day of the week in San Francisco for decades.

A major daily newspaper truly concerned about public housing tenants would inform readers how the problems at the SFHA can be fixed. And that would mean detailing how the federal government has dropped the funding ball. In San Francisco’s case, it would also mean covering Mayor Lee’s ongoing reinvention of public housing

Instead, Chronicle readers are likely to believe it’s all about former SFHA Director Henry Alvarez’s inept leadership, or the alleged wrongful firing of two SFHA attorneys (whose lawsuits provide continued material for Knight but have no relevance to SFHA’s multi-billion dollar funding shortfall).

Ongoing attacks on public housing authorities across the United States have been and still are used by Republicans to justify defunding the nation’s housing of last resort. So when the Chronicle covers SFHA problems without even referencing the federal funding shortfall, you know it is not promoting public housing’s future in San Francisco.