Is the San Francisco Chronicle Coming to End? 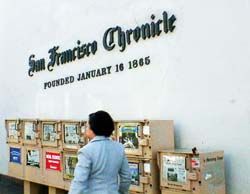 An analysis in the current issue of BusinessWeek reaches a dramatic, yet logical conclusion: the San Francisco Chronicle will likely end its print edition and rely entirely on its www.sfgate.com website. With the paper losing over $50 million a year, and with its planned cutbacks of 25% of its staff—one of its very best, Neva Chonin, wrote her last column yesterday—the end could come sooner than we think. But before anyone tries to beat us to the punch by purchasing BeyondGate.org, let’s assess the paper’s efforts to stem the red ink and its prospects of pulling out of its economic free-fall.

Jon Fine’s provocative story in the current issue of BusinessWeek (“When do you Stop the Presses?” July 23, 2007) makes a persuasive case for the San Francisco Chronicle terminating its print edition and publishing only online.

The numbers certainly back termination: the Chronicle loses $50 million annually while grossing only $23.9 million from subscriptions. The real question is how the paper can retain enough advertising revenue to make the switch to an exclusively online publication profitable—or rather, less costly than $50 million a year.

What business survives losing $50 million annually with no hope of a turnaround? While the Hearst Corporation that owns the Chronicle is not subjected to shareholder dissent (the paper is privately owned), some family members are going to start hiring attorneys to demand an end to the decreasing value of their holdings.

Assuming such attorneys are not already pressing for change as we speak.

It’s not clear what is more surprising: that the Chronicle puts out such a poor product despite having the largest newspaper budget in Northern California, or that it has made so few changes while losing over $1 million a week.

In the poor product category, during the past month the Chronicle has made a complete shift toward “soft” front page “news”—a previously released study showing that men talk more than women earned a banner front-page headline, while FanFest activities for the All-Star game and “Chicken John’s” mayoral candidacy also made the front page.

If I didn’t get copies of Mayor Newsom’s press releases, I would not realize that much of the Chronicle’s City Hall coverage is entirely – and I mean entirely – directed by the Mayor’s press office. When the Mayor holds multiple press events on a single day, he is virtually guaranteed multiple Chronicle stories the next day.

The days when local reporters spoke to activists and other politicians to get inside scoops that would become stories are long gone at the Chronicle. The paper still has investigative pieces, but its City Hall reporters—most of whom are highly skilled journalists—have been consigned to the role of glorified stenographers for the Mayor.

In the Sunday July 15 Chronicle Magazine, there was a story on five Iranian-Americans who have made a difference in the Bay Area. Among those included was Ahsha Safai, who works in Mayor Newsom’s Office and is widely rumored to be Newsom’s candidate in 2008 for Gerardo Sandoval’s District 11 Supervisor seat.

Not mentioned in the article? A fellow by the name of Ross Mirkarimi, San Francisco’s District 5 Supervisor who is Iranian-American and has been very involved in that community’s affairs. Mirkarimi’s exclusion could be an oversight—but it fits into a pattern of Chronicle stories that ignore or attack people affiliated with the city’s progressive forces.

In my May 22 article on the Chronicle’s layoff of 25% of its staff, I noted how the paper once had columnists that people bought the paper to read. I argued that “politics appears to be the only explanation why the Chronicle’s Neva Chonin is not a daily columnist. Put her and a provocative local writer like Gray Brechin in the paper three times a week each, and watch readership build.”

Well, I sure hope these words did not doom Chonin’s future at the paper. She announced yesterday that July 15 was her last column, and that she would be leaving the Chronicle.

Chonin is too committed to irony and self-deprecation to say the truth so I will – she was the biggest drawing card to the entire Sunday Datebook section, and one of the most perceptive writers on the paper’s staff. That she is leaving, whether by voluntary buyout or to “pursue other interests,” is a further sign that the paper is clueless about how to increase or even maintain circulation.

Of course, why would we think that the people responsible for declining readership and the loss of $50 million annually would now make good decisions about enhancing the Chronicle?

While Chonin leaves, the Sunday Datebook continues to run multiple stories by Aidin Vaziri, renowned for his insulting and sophomoric “Pop Quiz” music interviews. Memo to Executive Editor Phil Bronstein: Phil, whatever compromising photos Vaziri has of you that keeps him on your staff, realize that nobody cares who you were spending time with when married to Sharon Stone.

Regardless of what the Chronicle does, we are sticking with Beyond Chron. And to those who say that the name has become outdated, we’ll respond that it showed that we outlasted Northern California’s once proud “Voice of the West.”

Randy Shaw is the Editor of Beyond Chron. He can be reached at rshaw@beyondchron.org