Is the Media Really Helpless to Challenge Palin? 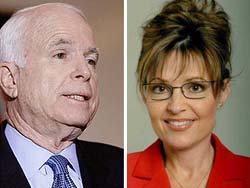 Prior to Charlie Gibson’s interview of Sarah Palin last week, Chris Mathews of MSNBC’s Hardball asked Ryan Lizza of The New Yorker why the media was not focusing on Palin’s lack of experience. Lizza responded that Palin’s scant political background made this a critical question, but that the McCain campaign had done such a good job of “working the refs” (by claiming that the media was anti-McCain and that questioning Palin was “sexist”) that the media was not highlighting the issue. Of course, nothing stops Matthews from devoting his hour-long show to Palin’s qualifications; news shows did this in the matter of Reverend Wright. But others have echoed Lizza’s assessment, as the traditional media seeks excuses for not doing its job. Do attacks on the media really prevent adverse coverage, or does this only apply when conservatives are doing the attacking?

During the past week, much of the traditional media has focused on the widening discrepancy between Sarah Palin’s actual record in political office and the story promoted by herself and the national Republican Party. The media has exposed Palin’s support for earmarks, the Bridge to Nowhere, and other policies she has claimed to oppose, and revealed a climate of favoritism and cronyism in the Palin Administration that rivals that of the Bush-Cheney regime.

But what the media has not directly confronted in the more than two weeks since Palin’s election is her fundamental qualifications to be a heartbeat from the presidency. And as Ryan Lizza and Chris Mathews both acknowledged, the reason for the media’s avoidance of this critical issue is pressure from the McCain camp.

Can anyone recall a time when pressure from progressive activists and media groups like Fairness and Accuracy in Reporting (FAIR) deterred the media from pursuing a story? Or when a progressive politician prevented coverage by criticizing the media, otherwise known as “working the refs”?

In 2004, T. Boone Pickens funded a campaign to “swiftboat” Democratic Presidential nominee John Kerry’s military record. The Kerry campaign issued a point-by-point rebuttal to the charges, and urged the media not to publicize such falsehoods.

But this did not deter media coverage of the swift boat attacks. The media did not worry about accusations of being unpatriotic for publicizing the slanderous attacks, arguing that the Pickens campaign was “news.”

In 2000 and 2004, reports circulated that George W. Bush had violated military procedure in his failure to carry out his National Guard obligations. Unlike the swift boat ads, which the media promoted as “news,” the media refused to probe deeply into the Bush allegations.

The reason? The alleged lack of irrefutable evidence, a standard never applied to the attacks on John Kerry. CBS anchorman Dan Rather lost his job for promoting the story about Bush’s military service record, and the media spent far more energy seeking to dispel rather than confirm the story.

Other right-wing narratives heavily promoted by the media–the notion that Al Gore claimed to have invented the Internet, that soon after taking office President Bill Clinton caused flight delays at LAX so he could get a haircut, and President Jimmy Carter’s alleged fight with a killer rabbit–became grist for the media grill, despite repeated demonstrations that the narratives were false.

Democrats attempt to “work the refs” did not deter coverage of the above stories. And the media used this criticism, particularly from the Kerry and Gore camps, to launch further salvos against their campaigns.

McCain: The Media is my Base

One could view the traditional media’s hesitancy to vet Palin as simply part of its longstanding effort to dispel claims of a liberal bias. But John McCain has been subject to the most fawning media coverage of almost any national politician over the past decade, and even described the media as his “base.”

This record should insulate the media from the McCain campaign’s claims of bias, allowing the type of questioning of Palin’s qualifications that it did not hesitate to raise to Barack Obama during the primary season. The fact that the media feels deterred despite its pro-McCain record, and the high stakes involved–we are talking about the potential next vice-president to a 72-year old candidate who has had cancer–shows that the Republican Party’s grip on traditional coverage of presidential elections is greater than many suspected.

While Bill Clinton is justifiably touted for the way he ran his 1992 campaign, President George H. W. Bush did not run the type of campaign against the Democrat that typified his son’s two campaigns and that of the current McCain effort. Ross Perot’s 1992 candidacy also put two candidates criticizing Bush, which made it easier for Clinton to keep the incumbent on the defensive.

The media’s favoritism toward George W. Bush in 2000 was explained as a function of Al Gore’s problematic personality, a point also made about John Kerry in 2004.

But with the economy in shambles, the nation’s world image in tatters, and a bright, people-oriented Democratic candidate in 2008, many suspected the traditional media would provide far fairer and balanced coverage this year.

But as shown by its failure to vet Sarah Palin, this suspicion proved overly optimistic. And although many publications are now doing an excellent job uncovering the truth about her record, this occurred after positive impressions (based on false claims) were allowed to solidify, diminishing the value of such stories.

It is not that the traditional media got “played” by the McCain camp over Sarah Palin’s lack of qualifications; rather, this media is part of the Republican presidential game, resurfacing every four years to help divert public attention from the nation’s growing problems.

Far more people get their information from the Internet in 2008 than in prior presidential election years, and this plus a great ground game is why Barack Obama should be able to overcome the traditional media’s pro-Republican bias.