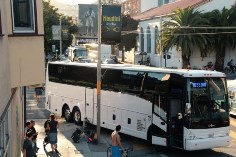 The national media is abuzz these days with stories about how high-tech is changing San Francisco. The New Yorker even argued that San Francisco’s new entrepreneurial culture is not simply transforming the city, but also “changing the country.” Many stories see tech as draining the city’s soul, blaming tech workers for rising rents and evictions and for changing economically diverse neighborhoods into elite enclaves. They convey the impression that San Francisco was an affordable, blue-collar town before Twitter moved to Mid-Market in 2012, and now will never be the same.

But the media and many others have gotten the San Francisco story completely backward. San Francisco’s values are reshaping tech, rather than the other way around. The values associated with high-tech—-free market capitalism, opposition to unions, low taxes—are no more popular in San Francisco today than before. Tech has not battled the city’s progressive constituencies, and while the influx of high-paid employees necessarily drives up rents in a market of limited supply, rents were skyrocketing in San Francisco prior to tech’s resurgence. The fact is that San Francisco’s values are stronger than critics recognize, and instead of being weakened by tech, are making the tech industry more progressive.

It’s an all too common journalistic approach: go down to Valencia Street on a Friday or Saturday night, visit Twitter or Square, and then profile a young techie as they get to work on a Google bus or ride their bike to Four Barrel Coffee or a similar gathering spot. Then describe a long line for an apartment vacancy and a longterm tenant facing an Ellis Act eviction and presto, we have post-tech San Francisco’s brave new world.

It’s an easy story to write, and popular with those who want to believe progressive San Francisco has abandoned its ideals in a Wall Street-like gold rush. But this common picture is misleading and ultimately wrong in its conclusions about tech’s impact on San Francisco’s progressive agenda.

Tech and the Housing Crisis

Would San Francisco be affordable if Twitter had left San Francisco and the tech companies that have moved to or expanded in the city in the past two years not done so? Not in the real world. Rents were already rising, and developers prevented for several years from building in the Eastern Neighborhoods first by the eight year rezoning process and then by the financial crash would still be building the condos that many wrongly attribute to being driven by the tech boom.

And let’s remember that the dot com boom (1996-2001) created by tech outside the city’s borders boosted housing prices as never before. You don’t need economic growth within San Francisco’s borders to fuel increased housing demand.

Other than from 1986-95, San Francisco rents have steadily increased since 1978. Ellis Act evictions declined from 2007-2011 because speculators could not get financing due to the 2008 real estate crash; but rents continued to steeply rise during these pre-tech years.

San Francisco activists have enacted the nation’s strongest rent control, eviction protection, and housing preservation laws. The city also has some of the most restrictive zoning laws (unlike NYC, where Mayor Bloomberg was able to upzone 37% of the city during his tenure).

The tech industry has made no effort to weaken any of the above laws. Nor has it weighed in to weaken San Francisco’s strong regulations over other city services.

The Reshaping of Tech

Accounts of how tech is allegedly reshaping SF routinely overlook the politics of the November 2012 election, when the tech industry strongly backed a tax reform measure increasing annual business tax revenue by $28 million. While the tech sector benefited from the shifting of taxes to other businesses, the bottom line impact—a dramatic increase in business taxes—is not a goal typically associated with high-tech.

Yet the tech sector backed this tax increase because they understood that raising new revenue was necessary for the initiative to pass (or to even qualify for the ballot, as labor’s support was essential and SEIU 1021 required that the measure increase revenue).

The image of a San Francisco transformed by Google buses (vans that transport SF residents to the company’s South Bay home) and by a rousing Mission District restaurant scene misses the larger reality. Only two blocks from the center of this scene on Valencia Street is Mission Street, long the heart of the neighborhood. Mission Street is little changed over the past two decades. It has avoided nearly all of the gentrifying impacts that have so dramatically transformed Valencia and other parts of the Mission. Crime on Mission remains high and the 16th Street and Mission BART station—only two blocks from the Valencia corridor—is among the city’s highest crime areas.

In its haste to declare San Francisco a city transformed, the media overlooks that San Francisco has the most single room occupancy hotels (SROs) of any city in the country. And rather than demolishing low-cost public housing to create more space for the rich, San Francisco is embarking on a bold plan to rebuild and /or upgrade virtually every single public housing unit. San Francisco also spends more per capita on housing homeless people than any other major city, while also providing one of the nation’s best local health care systems and highest minimum wage (now $10.55 per hour).

I wish the reporters highlighting tech’s impact came to the Tenderloin, where I have worked for over thirty years and where there is no evidence of a high-tech “transformation.” If the Tenderloin, only a few blocks from Twitter, has felt no impact, how can it be said that tech has transformed San Francisco’s culture and that of the entire country?

San Francisco, like other urban centers, has seen an influx of high earning young people since the 1970’s. But as San Francisco has gotten more affluent, its progressive values—as evidenced by voting patterns—have not changed.

San Francisco’s progressive activists have achieved far too much over the past four decades for these gains to be quickly or easily overturned. The real story of San Francisco is how its values are changing tech culture, not the other way around.

Randy Shaw is Editor of BeyondChron. He analyzes San Francisco politics since 1980 in his newly released, The Activist’s Handbook, Second Edition: Winning Social Change in the 21st Century.