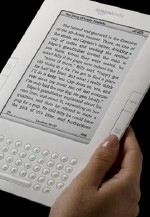 I’m usually among the last to believe apocalyptic predictions, but can no longer discount print media’s rapid decline. It was reported last week that e-books jumped from 2.9% to 8.5% of trade book sales in the past year, which followed Barnes & Noble’s announcement that it was putting itself up for sale. Bars, restaurants and entertainment venues that once relied on print ads are increasingly relying on Facebook, Yelp, and other (no cost) social media. Newsweek magazine recently sold for $1, meaning that the entire company sold for less than the price of a single issue. Reduced prices for iPads, Kindles, and similar hand-held electronic reading devices ensure continued e-book growth, as do e-book sale prices below even Amazon’s discounted print editions. And considering that those keeping newspapers and traditional books afloat are over fifty years of age, the future of print looks grim.

I’ve recently noticed a lot more people reading electronic books on Kindles and similar devices, which means my personal experience confirms the statistical trend. And when you hear that giant chain bookstore Barnes & Noble is promoting its own e-book reader, the Nook, and putting itself up for sale, then it’s clear that the future of print is much shorter than many of us thought.

Those who grew up pre-Internet love the feel of a newspaper in their hands, and many cannot imagine reading a book on a computer screen. But what’s become known as the Millennial Generation, those who knew computers before they could read, do not have loyalty to the printed page.

Prior to wi-fi, these young people read print media while hanging out in cafes. Now seeing anyone reading a hard copy of a book in café’s frequented by young people is a rarity.

And while a small number of cafes have garnered attention by barring laptops (in order to prevent people from paying for a single coffee while using their table as a home office), the millennial generation market will not allow this to become a trend.

Similarly, carrying around a laptop on public transit or bringing it to the beach seemed crazy given risks of theft and the hassle. This seemed to mean that people needed hard copies of books or newspapers in certain key areas of their lives (traveling to work, on airplanes and during vacations).

But the Kindle, Nook, iPad, etc. has changed this. Reading on these platforms may be less cumbersome than carrying around a large book.

Further, young people move around a lot more today than in previous generations due to high housing costs and the feeling that they need not be settled down in a career job by 25. So young people who go in and out of jobs, mixing travel and other activities, do not want to carry around a lot of previously read books. Nor do they care – as much of the over-50 crowd did – about building a home “library.”

And ask someone under-30 which magazines they subscribe to. My bet is that most will say “none.”

The Debate Has Changed

Remember when we used to debate whether consumers should take advantage of the increasingly steep discounts offered by chain bookstores, or to pay higher prices to keep our great independents afloat?

And arguments over whether people should buy discounted books from Amazon, which was also seen as jeopardizing independent booksellers?

Well, the already dramatic decline in overall bookstores has left many if not most young people unaccustomed to buying new books in either chain or independent bookstores. And since they are buying books online, watching movies and television shows online, and listening to music on their computers, it’s not much of a jump for them to be buying e-books – particularly since they are cheaper.

Some of us authors hope that the academic market can withstand the e-book phenomenon and become an ongoing market for hard copy books.

But even this market is weakening. First, because rising tuition costs have led some professors to assign fewer books. Second, obscene price gouging by textbook companies – fought for years with increasing success by my friends at the student PIRGs – is creating pressure to put more of these texts online.

Further, many college students do not buy assigned books until they are unable to secure a used copy online. In the pre-Internet age, this meant checking for used copies in all of the stores around campus. Today, it means finding a used copy being sold online from a supply that exists anywhere in the world – reducing the chances that authors or publishers receive any proceeds.

On the Bright Side …

The coming end of print does not mean that books will not be written, or that ideas once expressed in newspapers and magazines will not be available. Some paid jobs in the print publishing industry will remain, though nowhere close to historic levels.

Children’s books should remain strong, and Kindles’ and their progeny are weak substitutes for beautiful hard copy photography and art books. In fact, I think graphics of all kinds will remain technically superior in traditional formats for some time.

And let’s not forget that the traditional publishing industry excluded many voices that have found audiences online, and that the Internet has unquestionably democratized media.

But count me among those who no longer see print with a long-term future. I had a conversation a decade ago with a longtime San Francisco Examiner and Chronicle writer, who told me that he wondered if his grandkids would even know what a newspaper reporter once did. I thought he was joking, but he appears to have seen the future more clearly than others.