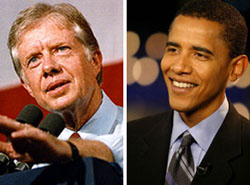 If you read the Huffington Post, Daily Kos, Firedoglake, Beyond Chron or any number of progressive political sites, then you know that there is a virtual consensus that President Obama must (1) be a fighter, not a conciliator, (2) stop seeking “bipartisanship” and cooperation with Republicans out to destroy him, and (3) become a transformational figure whose populist appeals show the American people he is on their side. These points were constantly repeated prior to the November 2nd elections, and reached a unifying crescendo in the past week. But as progressives look to successful strategies of the past and new ideas for the future for reviving the progressive spirit of 2008, Obama appears unwilling to change course. His post-election calls for cooperation with Republicans, and compromising on extending tax cuts for the wealthy, shows he is not influenced by his critics. The Democratic Party could well have another Jimmy Carter on its hands – a President who stubbornly resists even the most well-meaning advice, and whose fall also brings down the progressive wing of the Party.

In a February 25, 2008 article, “Critics Wrongly Project Obama as Another President Carter,” I disputed efforts by Alexander Cockburn and Paul Krugman to compare candidate Barack Obama to the failed President Jimmy Carter. My arguments focused on Obama’s far more progressive and labor-backed political background, and his inspiring personality – which contrasted with Carter’s stern, moral taskmaster approach.

But re-reading my piece, I am struck by Krugman’s comment that Carter “began his administration with words of uplift – ‘let us create together a new national spirit of unity and trust’ – and ended up delivering America into the hands of the hard right.” Obama’s obsession with bi-partisanship has already brought the hard right its greatest electoral gains since 1980 (Carter’s re-election year), and he seems impervious to pleas that he change course.

Obama began his post-election world by foolishly describing the November 2 results as a “shellacking.” He used that term instead of highlighting how Democrats held the Senate, and noting that most defeated House members had opposed his policies. This typified the Obama Administration’s poor messaging, in sharp contrast to a 2008 campaign that had people describing Obama as the next Great Communicator.

In the past week, commentators have deluged Obama with advice on how to reclaim his momentum. We’ve had Robert Reich urging Obama to learn the lessons of 1936 rather than 1996, and Frank Rich of the New York Times suggesting that the President follow Harry Truman’s fiery response to Republican gains in the 1946 elections.

As one of the many who once saw parallels between Obama and FDR or Lyndon Johnson, I support looking at history to guide Obama’s future. Unfortunately, my sense of the past leads me in a different direction.

Obama has no intention on replicating Harry Truman’s fighting attacks against a “do nothing” Congress, or FDR’s powerful attacks on economic privilege and the elite. If Obama wished to go in the direction, he would already have done so.

Instead, like President Carter, Obama knows where he wants to go and – as he has repeatedly said, is willing to be a one-term president if that’s what it takes to remain true to himself. Most assume such talk is purely rhetorical, but it almost seems as if Obama sees popularity declines as evidence that he is taking on the tough tasks that most politicians refuse.

Although Jimmy Carter never claimed to be progressive, his failed presidency brought down five liberal Democratic Senators in 1978 and gave Republicans control of the Senate following the 1980 elections. Carter’s presidency fueled the rise of the Christian Right (then known as the Moral Majority, founded in 1979), and laid the groundwork for the transformative ascendance of the right-wing with Ronald Reagan’s election in 1980.

The parallel with Obama’s first post-presidential election is disturbing

Did Obama even wage a public defense of progressive Nancy Pelosi at any point during the fall campaign? He seems to have forgotten that it was Pelosi who pushed health care reform to happen when the Obama Administration had all but given up, and that it was Pelosi’s House that passed most of the major measures that were central to the President’s agenda.

We know Press Secretary Gibbs long ago predicted Democrats could lose the House, and one sees little evidence since the election that Obama is heartbroken over the Democrats’ loss of the House or Pelosi’s loss of power. It’s almost as if the Obama Administration views Pelosi as it does those pesky critics on the progressive blogosphere – rather than as political ally whose messaging, organizing skills and keen political instincts could have prevented the House takeover if the President had long ago followed her advice.

Progressives are full of great ideas for putting Republicans on the defensive, and for Democrats regaining the populist momentum. But if Obama follows Jimmy Carter’s example and continues to solely follow his own playbook, such efforts are doomed to failure.

The days on the campaign trail where Obama urged supporters to keep him on track, and claimed that constructive criticism would make him stronger, seem long ago. I don’t know if Obama is reading the advice he gets from the blogosphere and traditional media, but he is sure not following it.

Randy Shaw describes how activists can keep Democrats accountable in both The Activist’s Handbook and in Beyond the Fields: Cesar Chavez, the UFW and the Struggle for Justice in the 21st Century.